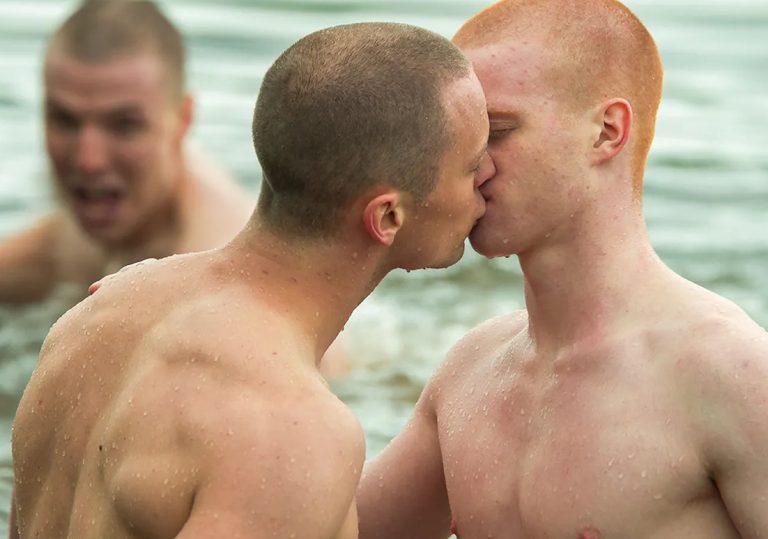 This made it to John Waters’ personal top ten films from 2021, so it could really go either way.

Would make a great double bill with Benedetta.

Bruce LaBruce is a director whose work often puts the visceral, ugly extremes of sexuality on full display. Notorious for his punk ethos, a proclivity for embracing the unacceptable and pushing the limits of discomfort, he operates on the countercultural fringes of the film industry, always tongue-in-cheek and with an unequivocally queer sensibility. And the crux of his latest queercore provocation? Two estranged identical brothers become embroiled in a blasphemous web of incest, polyamory, revenge and redemption.

Saint-Narcisse takes us back to ’70s Quebec, where 22-year-old leather-clad autoerotic Dominic (Félix-Antoine Duval) rides his motorbike, takes selfies on his Polaroid camera and turns himself on just by looking at his own reflection. After his grandmother’s passing, he discovers his mother Beatrice (Tania Kontoyanni), once presumed dead, is very much alive, but had been long excommunicated. She lives as a sapphic forest witch with her feisty lover Irene (Alexandra Petrachuk) who, for reasons truly beyond the grasp of my comprehension, “doesn’t grow old”.

Beatrice and Irene live close to a monastery, where young monks led by a deranged Father Andrew (Andreas Apergis) engage in various monk-like activities such as skinny dipping and kissing. Upon reuniting with his mother, Dominic also finds himself face to face with the image of a monk named Daniel (also Félix-Antoine Duval), who is his estranged twin. Let the twincest schlock fest ensue.

A devotion to camp often warrants a degree of self-awareness in order for it to work. I’m personally a sucker for bizarre theatrics, goofy ’70s camp, and deliberately stilted dialogue that resembles the cadence of Laurie Anderson. The tenuous and flimsy aesthetics of Saint-Narcisse are so self-aware that it ends up being more distracting than it is amusing. The intentionally clunky dialogue goes from delightful, to mildly entertaining, to silly, to borderline unbearable. At least Duval has a face straight out of a renaissance painting.

Allusions to the Greek myth of Narcissus and a fetishised Saint Sebastian à la Derek Jarman’s Sebastiane are plentiful, and the charm of LaBruce’s artistry comes from the way he interprets and reflects culture – these sculpted male figures are tied to “divinity” as much as they are to their contemporary reframing as gay icons.

This made it to John Waters’ personal top ten films from 2021, so it could really go either way.

Would make a great double bill with Benedetta.