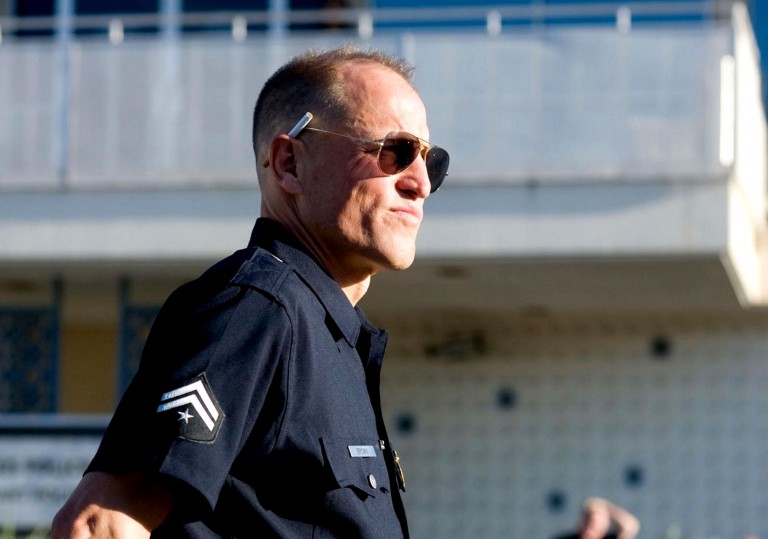 Everybody loves Woody Harrelson – and he has form with this director.

A compelling wallow in the gutter, but where’s the joy?

Harrelson is riveting, and Moverman’s gaze is unflinching.

An LA-set cop story co-written by noir poet James Ellroy? That’ll mean chain-smoking men in fedoras, grimacing their way to hard-won justice amid a morass of institutional corruption, won’t it? Not this time – well, apart from the chain-smoking. And the corruption.

Set in 1999 but feeling fiercely contemporary, Ellroy and director Oren Moverman have created a modern noir that nods perfunctorily at the genre’s conventions, but sidelines them as quickly as it can to get to its real business – a brutally watchable portrait of one of modern film’s great bastards.

Woody Harrelson – who won plaudits for his recent turn in Moverman’s The Messenger – has his dial turned more to natural born killer than easygoing barman for his career-best turn as ‘Date-rape’ Dave Brown, a perp-whacking dinosaur in a world where any videotaped indiscretion is beamed out on the evening news.

Avoiding the Dirty Harry trap of glamorising a born fascist, Moverman leaves us under no illusion that Brown is a Very Nasty Man. He’s nakedly racist (but articulate enough to get away with it), happily beats suspects for information, and is filled with self-righteous contempt for the modernisers he sees creeping into the LAPD; an institution which, in his eyes, doesn’t so much keep peace in the city as occupy it by force.

Throw in a complex home life (he married two sisters in succession, and has a daughter by each) and some compulsive womanising, and you have a dream part – one which Harrelson tears into, convincing us of his brute intelligence, as his clash with reformers sends him deep into an agonising spiral of drink, violence, pills, and more drink.

This is no dumb brute, either – Brown delights in sermonising on the hypocrisies of liberal society; speeches that leave his better educated superiors stumped. Overshadowing a plethora of classy bit-players, Harrelson is never off-screen and has never been better. Moverman more than matches him, shooting LA’s streets in harsh bright tones by day and sickly sodium light by night that are a million miles from the sheen of Michael Mann or Nicolas Winding Refn.

Some have sniffed over the sidelining of the real-life context – 1999 saw the actual Rampart division caught in a scandal where the cops and criminals became hard to tell apart, but Rampart the film merely hints at the political shitstorm going on elsewhere. It’s a bold as well as a wise move, keeping the film away from any tedious dramatising of the ‘issues’, and dialling in on one man who embodies them all anyway.

Because if one cop can sink this low and still wear a badge, it doesn’t take a diploma in sociology to see that the LAPD had to change.

Everybody loves Woody Harrelson – and he has form with this director.

A compelling wallow in the gutter, but where’s the joy?

Harrelson is riveting, and Moverman’s gaze is unflinching. 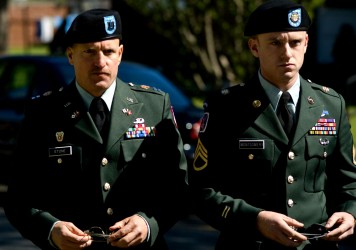 The Messenger is a movie that delivers its own moral tale – one many are probably not going to like. 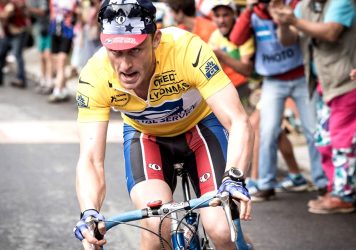