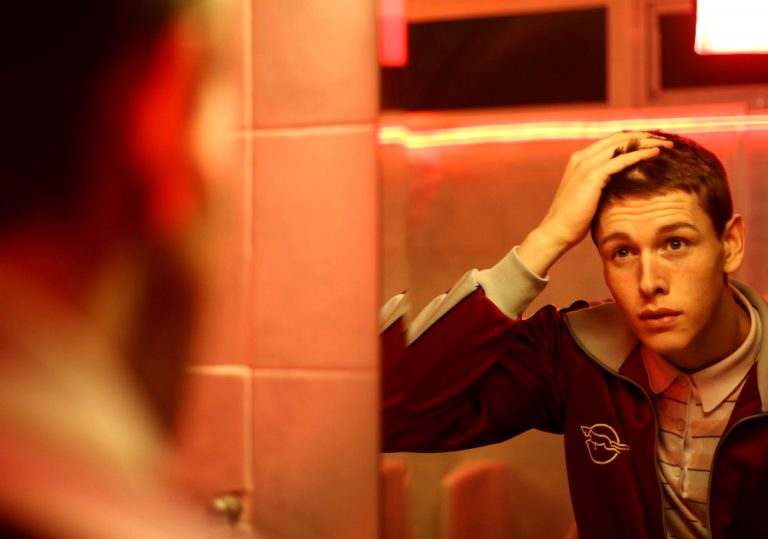 This unique premise promises an offbeat look at the sensuality of art.

Some great visuals, but often feels like a directionless trudge.

It’s worth it for Harris Dickinson and you won’t have seen anything like it.

This highly stylised drama follows a male escort’s journey through the neon-lit streets of Soho.

Eighteen-year-old Jim (Harris Dickinson) is looking for a place to stay. He’s left his family home in Essex to seek his fortune on the neon-drenched streets of Soho and it’s not long before he realises that there’s a lot on offer in London’s after-dark wonderland.

Everything except a bed for the night, it seems. Enter the Sexy Boys Raconteurs, a group of male escorts who take the attractive young Jim under their wing. For this group of lads, the sex part of their job is a breeze; their main focus is the post-coital chat. In order to impress their client base of high-class older men, the group teaches Jim all they know about classic art. The only problem is, Jim finds himself overwhelmed with the beauty of a genuine work of art to the point where he falls unconscious.

Filmed entirely in a studio, with wooden sets and bright lighting creating the world for the characters, director Steve McLean creates a highly stylised film that feels removed from time and place. While there is passing reference to social media and the use of a mobile phone, Jim also takes calls on a rotary dial phone and places his escort ads in a red London phone box. McLean clearly wants to evoke the long-gone Soho of the ’70s and ’80s in a timeless space and yet we simultaneously find ourselves in present day and, in Jim’s hallucinations, the Baroque era.

The film is perhaps better described as a theatrical fever dream. It certainly uses theatrical conventions, with tableaux frequently used to stop and capture the spinning world of Soho and to bear witness to Jim’s unconscious reveries in which he stars as the central figure in a famous masterpiece. The dialogue, too, takes on a more theatrical tone, often paced more like a song or beat poem than a realistic conversation.

The clunky script, in its attempt to celebrate great art and reminisce about Soho’s heyday, shoehorns in repeated references to Caravaggio, Francis Bacon and Lucian Freud, but for all the film’s repetition it’s still not clear what we’re supposed to make of these figures, their work and their relevance to the story. It’s an unsubtle and jarring homage that seems to be more important to McLean than an original narrative. Despite such evocative subject matter, the film ultimately leaves us cold.

This unique premise promises an offbeat look at the sensuality of art.

Some great visuals, but often feels like a directionless trudge.

It’s worth it for Harris Dickinson and you won’t have seen anything like it.