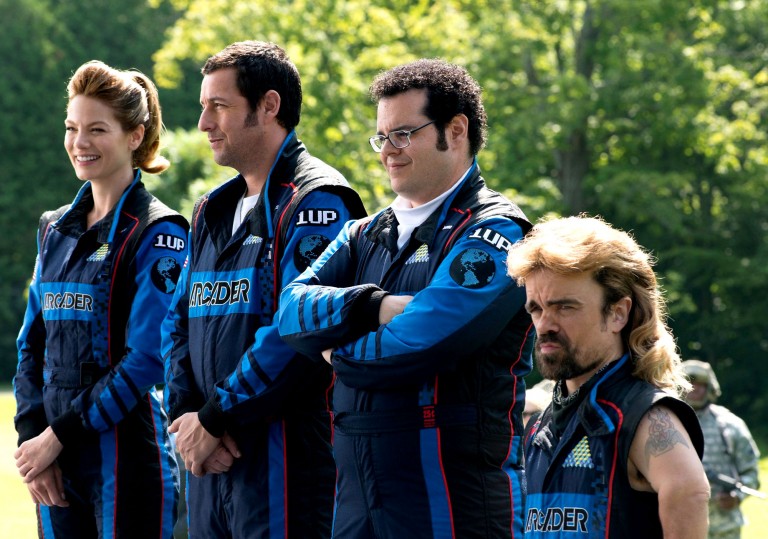 Game over, man. Game over.

Adam Sandler’s star power all but fizzles out courtesy of this malfunctioning arcade game pastiche.

Pixels is a cheerless calamity that yearns for the salad days of the early ’80s, even when its gender politics remain hopelessly stranded sometime in the Middle Ages. It’s the most archaic, antiquated, and downright oldfangled endurance test you’ll likely face in a multiplex this year; a real schlub of a movie that doesn’t just fly in the face of fashion, it man-spreads proudly before all preconceived notions of taste and decency. In other words, it’s the cinematic equivalent of receiving a supermarket brand deodorant gift set on Christmas morning: you don’t want it, you’ll never use it, and frankly, it stinks.

Only the first 10 minutes are semi-bearable. The film kicks off with a flashback to 1982, when a 12-year old gaming genius called Sam Brenner tries and fails to defeat his devious rival, Eddy Plant, in the final challenge of a high-profile arcade game tournament. During these early moments, Pixels hobbles along on sheer nostalgia: kids with big hair and flared jeans skid around on bad ass Choppers, and references to retro arcade classics like Galaga and Pac-Man abound. They even throw in a bubbly Dan Aykroyd cameo for good measure, replete with supernaturally pigmented bouffant. (Later, in a bravura act of corporate synergy, there’s a product placement for Aykroyd’s own brand of Crystal Head vodka that is so crass and distracting you’ll want to applaud.)

For a short while, Pixels is rather fun, albeit in a low rent, Super 8 meets Hot Tub Time Machine way. Yet there’s a whiff of inauthenticity that ominously hovers in the air during these initial scenes, and then spreads like a wild mist as the film progresses. The director is Chris Columbus, the man behind the screenplays of pop culture milestones like Gremlins and The Goonies, and the kind of filmmaker that really should know how to bring this Amblinesque world to life. But it feels like a chintzy pastiche of a Chris Columbus film. Everything’s just a little too heightened, too cartoonish, too garish: a moonstruck memory of a blockbuster made 30 years ago, conjured by an older man struggling to recapture the energy and excitement of his earlier work.

Sadly, the picture takes a turn for the worse when the action shifts to the present day. By this point in his life, Brenner is a 46-year-old failure. He receives the call to adventure from his childhood friend the President of the United States (who, by the way, is Paul Blart: Mall Cop) when the Earth is threatened by an alien horde disguised as pixellated manifestations of iconic game characters. Brenner teams up with his childhood nemesis Grant (Peter Dinklage) and their sinister conspiracy theorist pal Ludlow Lamonsoff (Josh Gad), and together with a token female, they save the world from the looming extraterrestrial peril using their mad gaming skills.

Game on? Not a chance. The elder Brenner is played by the desiccated husk of Adam Sandler, a comedy performer who continues to challenge the very nature of comedy performance simply by resisting the temptation of humour. Sure, Sandler has had his moments, but has the Billy Madison star never truly lets rip. His filmography is scattered with productions that adequately service the requirements of his core audience, but there are few roles in the back catalogue, if any, that could be described as great.

Pixels isn’t just not great, it’s catastrophic. Sandler spends half the movie looking haunted. He clocks in a charmless, charisma-free turn that lacks any kind of verve or wit. He delivers the lines, but he rarely appears to believe in them. Frankly, he looks like he’d rather be playing beer pong with the guys from Grown Ups 1 and 2 than dealing with this jive.

The apathy extends to the crew too. You can sense Columbus growing steadily bored with the material before our eyes. Check out practically any scene that requires a crowd of extras, be it an action sequence, or a presidential ball: in the background you’ll see dozens of people, standing around, not interacting terribly convincingly, and never truly blending into the scenery. They look like Antony Gormley sculptures. Fine if the scene in question is a piece of dialogue or character work, and the camera’s close-up on the core actors. But when you’re trying to convince an audience that an alien army, disguised as a giant marauding centipede, is trying to take out a squadron of highly trained soldiers, and said soldiers look like they’re waiting for the number 68 to West Norwood? Well, that’s a problem. Did somebody just forget to direct them?

To be fair to Sandler and Columbus, they’re ill-served by a screenplay (if that’s what we’re calling it) that dares us to hate every single one of its heroes. No wonder they can’t be bothered. For example, shortly after we’re introduced to Brenner in his final, middle-aged form, he encourages the aforementioned token woman not only to get drunk, but then, in her most vulnerable state, to make out with him. The token woman turns out to be Lieutenant Colonel Violet van Patten (Michelle Monaghan), a high-ranking army official who, let’s be honest, deserves someone so much better than this boorish loser. Naturally, they fall in love, in spite of Brenner’s overwhelming creepiness. The magic of the movies!

Women are treated diabolically. Take, for instance, the casting of the amazing Jane Krakowski in the thankless role of First Lady. Krakowski is a funny person, amply evidenced by her razor-sharp appearances in TV staples such as 30 Rock and Unbreakable Kimmy Schmidt. There’s neither a jeer nor jibe that Krakowski couldn’t knock out with merciless precision. The woman is a genius. In Pixels, she appears to have three, maybe four lines of dialogue, and that’s her lot. Astonishingly, there are entire scenes that require Krakowski merely to stand there looking pretty while propping up the dude with all the lines, in this case the perennially awful Kevin James i.e. Paul Blart: Mall Cop.

But this isn’t the movie’s most heinous crime. That’s saved for the finale, when a lusty video game vixen, initially tasked with destroying Josh Gad’s character Ludlow, is presented to our fearless, slightly perverted champions as a trophy for their success in – spoiler! – defeating the intergalactic intruders. Ludlow, having spent most of Pixels touching up other members of the cast for hilarious comedy effect, then appears to claim the lusty video game vixen as an actual trophy wife. Also, the lusty video game vixen is completely mute, so even if she wanted to have a say in the matter, she physically couldn’t. Honestly, you’ll never appreciate Gad’s performance as Olaf the Snowman in Frozen in quite the same way again.

Are these the core messages that the makers of Pixels want to send to young impressionables who buy a ticket to their movie? That it’s ok to take advantage of vulnerable women after a few drinks? That you can be one of the most talented comedy performers around, but if you’re a woman, you’ll still only get to play second fiddle to Paul Blart: Mall Cop? And that if you behave like a kooky sex pest for most of your adult life, you’ll be rewarded with a lusty vixen of your own who’ll want to reproduce all day long? If so, that’s a movie that nobody wants to see: not in 1982, not in 2015, not ever.

And if all that sounds bad, wait until you hear what they do with Q*bert.

Game over, man. Game over.