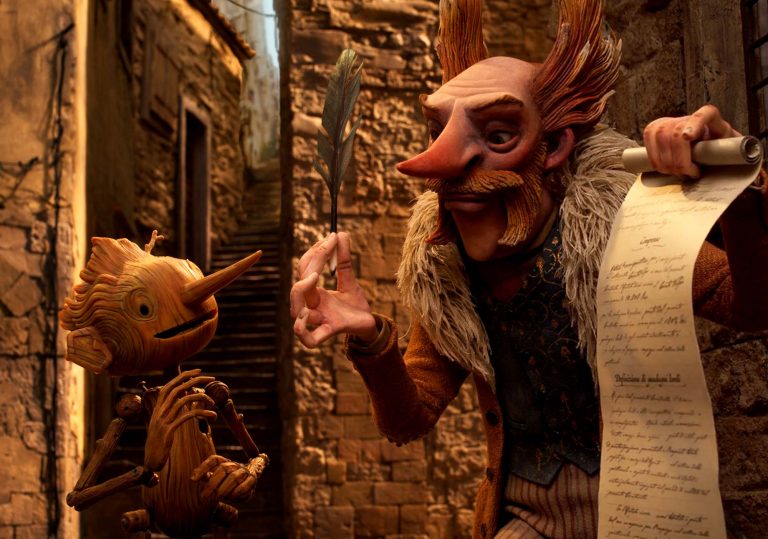 Better to be a wooden boy than a fascist.

As strange and macabre as it is heartfelt.

Becoming a real boy isn’t something that crosses the mind of Pinocchio, in Guillermo del Toro’s new adaptation of Carlo Collodi’s books. This Pinocchio is only concerned with being a “good” boy. Del Toro – in his first animated film as director – along with co-director Mark Gustafson (animation director on Fantastic Mr Fox) and co-writer Patrick McHale (of Over the Garden Wall fame) explore this seemingly simple question over various adventures as Pinocchio wanders the country in search of the answer, and the story is updated to Mussolini’s Italy.

A number of father figures – including a crooked carnival owner and a fascist Podestá – try to teach him that being “good” means blind obedience, either at the service of creating capital or killing Italy’s enemies. To Geppetto, it means obedience to the spirit of his departed son Carlo, with Pinocchio’s creation occurring as an effigy made in drunken grief.

The resulting gnarled and asymmetrical puppet design of the wooden boy already stands apart from previous, softer adaptations but the rest impresses just as much: Geppetto himself looks as though he was carved from an old tree. Del Toro and Gustafson’s production design favours painted backdrops and clockwork facial animation rather than face replacement and CG touch-up, giving the whole film a handmade quality, which feels apt for a story starring a carpenter.

Pinocchio’s return to more traditional techniques is a breath of fresh air, as it relishes the slowness and tactility of the medium. The acting conducted by the animators emphasises slip-ups and stumbles and moments that don’t really “mean” anything other than a pause between actions, something del Toro has credited to his love of Hayao Miyazaki (who directed Porco Rosso, a fairy tale about bodily transformation set against a backdrop of Italian fascism.) 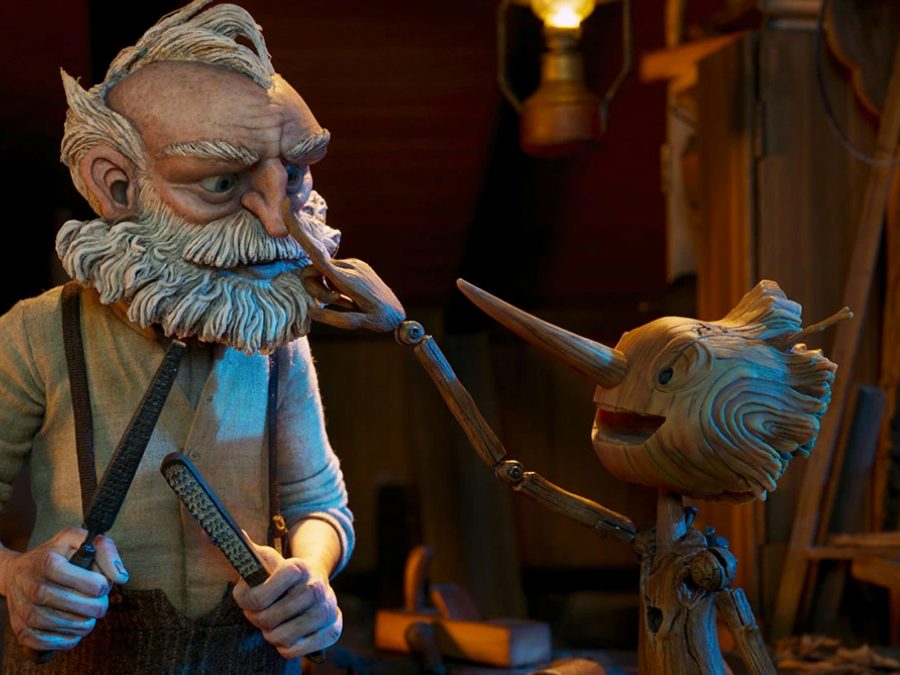 Both known for their frequently disturbing spins on fairy tales and classical storybook structure, del Toro and McHale are a heaven-made match. Pinocchio’s journey frequently mixes things up between the horrific creatures of del Toro’s past and the whimsical but spooky animal people of McHale’s work. But it’s not so strange that it sheds its humanity – if anything this might be one of del Toro’s weepiest movies, as Pinocchio’s immortal life brings with it significant emotional burden.

There many digressions from the famous 1940 Disney adaptation, but also fascinating points of commonality. Instead of being blessed with a mortal life, Pinocchio learns the bittersweetness of how brief it is, and how that brevity shouldn’t be wasted on trying to fit within strict categorisation from parent and state alike. The Disney version warns of disaster and moral degeneracy in the absence of authority.

But del Toro’s film loves disobedience. He draws lines between abusive fatherhood and fascism, as Pinocchio meets various children also blindly trying to please their fathers at all costs. By changing the cautionary tale to be against assimilation and categorisation, plus its invigorating update of traditional technique, the film carves out a space not just as the best Pinocchio film of this year, but among the finest films the director has made.

Better to be a wooden boy than a fascist.

As strange and macabre as it is heartfelt.