Night of the Kings 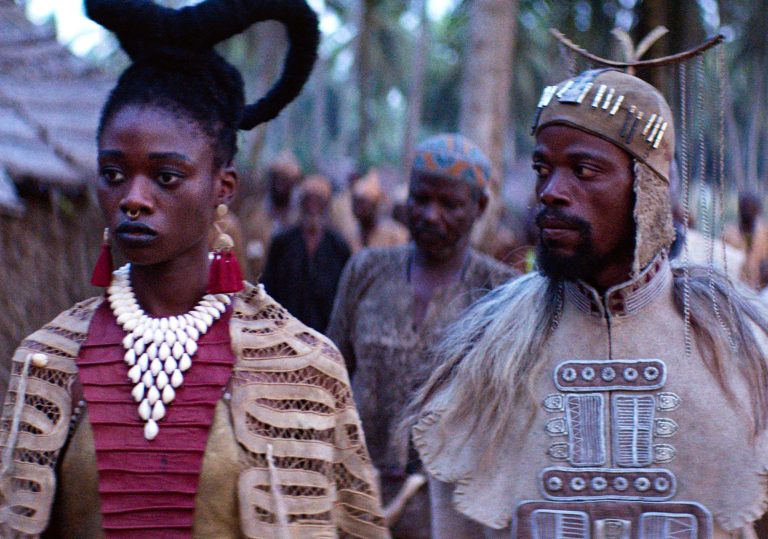 The film targets a niche audience but the cinematography and acting can appeal to anyone.

Lacôte leads the audience’s emotions and entertainment like a skilled conductor to his orchestra.

It asks a lot from the viewer, but pays them back two-fold.

Philippe Lacôte’s Night of the Kings opens on an extended overhead shot of an Ivorian jungle. It lasts just long enough to make you feel lost in an entirely different world. And soon enough, that initial gambit immediately pays off. A young man (Bakary Koné) arrives as a new inmate in an unruly prison that’s completely governed by its inmates, under a de facto leader named Blackbeard who goes by the title Dangôro (Steve Tientcheu).

Blackbeard then names the new inmate as their “Roman” for the night before he properly settles into the prison. Not knowing what exactly being a “Roman” entails, and not entirely given a choice in the matter, he accepts. The stakes rise when the new inmate realises that what the Roman does is get on a podium and tell a long story to the entire prison but, when his story ends, he gets murdered.

The story Roman decides to tell is that of his former gang leader named Zama King, who has just been slain via mob justice in the streets of Abidjan. Zama King is based on a real-life gang leader (also called ‘Zama’, inspired by the name of local sour fruits) who died under similar circumstances.

The real-life Zama named his gang Les Microbes after the gang in Fernando Meirelles and Kátia Lund’s City of God. Lacôte wisely uses that as his main influence in this film, as it merges its flashbacks and present-day material brilliantly to give an immense depth to what drove Zama King. It also pays homage to Jenet Genet’s 1947 play ‘The Maids’ in how animated the inmates are when Roman is recounting his tale.

As impressive and complex as the film is, it loses some of its allure when the story begins adding elements of mysticism to an otherwise very grounded context. This mix of timelines and styles suddenly becomes quite jarring and the CGI used is not very convincing – it risks taking you out of the story completely. But just as things start meandering the film quickly returns to its main focus and those incursions into mysticism eventually do pay off. At a certain point, even the inmates start criticising Roman, questioning his story’s plot holes. They start drawing terrifying conclusions: that he’s only trying to extend his period at the podium so that they don’t kill him.

There’s a deeper layer to the film where you start exploring the main themes and realize that the Zama King story was ultimately used as a Trojan’s horse to guide us into scrutinizing the post-election violence that occurred in Ivory Coast post the arrest of former President Laurent Gbagbo. It plays like a fine political allegory when you start recognizing all the internal politics of the prison mirrors the Ivorian situation; Blackbeard’s time as the Dangôro is running out and Lass (Abdoul Karim Konaté) wants to take over – not to improve the inmates’ lives.

“Blackbeard treated them like slaves, we shall treat them like customers”, he says, however characters like Half-Mad (Jean Cyrille Digbeu) also want the throne too, and they’re ready to fight for it. There’s also an interesting character named Silence (Denis Lavant), who appears to represent the silence of the broader Western society during these tumultuous times.

What Lacôte achieves here in his second feature, by mixing documentary and fiction styles and also genre-bending to near breaking point is remarkable. The different elements end up complementing one another and supplies the viewer with a unique cinematic experience.

The film targets a niche audience but the cinematography and acting can appeal to anyone.

Lacôte leads the audience’s emotions and entertainment like a skilled conductor to his orchestra.

It asks a lot from the viewer, but pays them back two-fold.