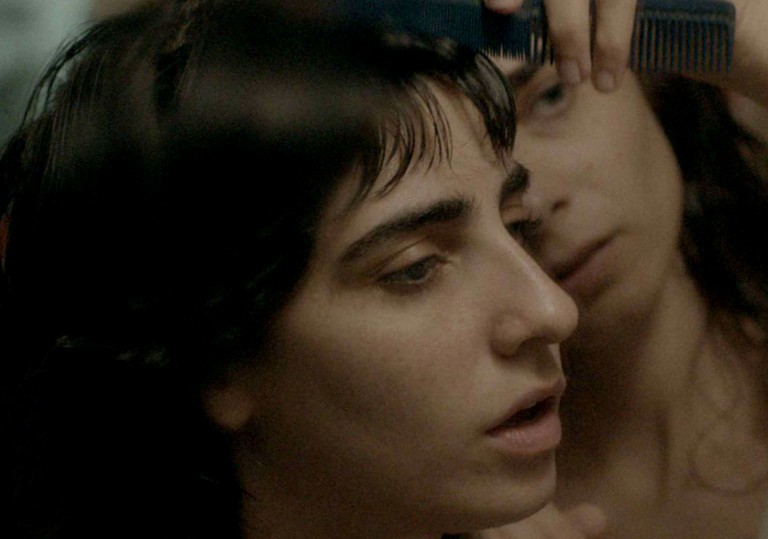 This one has been a long time on the festival circuit.

A simple, clear-sighted drama which never attempts to convince it has all the solutions.

Memorable for Liron Ben-Shlush and Liat Goren’s performances, plus a great final shot.

The subject of social care is deemed critically unsexy within political circles. To take an interest in the comfort of those less fortunate than ourselves is not a bona fide vote winner – social carers muddle through however they can, and that’s all we need to know about the matter. Israeli director Asaf Korman’s sensitive 2014 feature, Next to Her, reveals the challenges of living alongside someone with disabilities, not just on a practical day-to-day level, but also its impact on any potential emotional and romantic life.

Liron Ben-Shlush plays Chelli, a hard-nosed security guard who looks after her mentally disabled sister, Gabby (Dana Ivgy). The siblings have a close bond, even though Gabby is unable to fully comprehend the love, care and eternal patience that is expended trying to get her through each day in one piece. If tensions even rise, Gabby’s stock mode of rebellion involves head-butting the hard floor of their cosy apartment. Chelli is only able balance her home and work life by locking Gabby inside the apartment during the day time – a reflection of the fact that she’s willing to take drastic measures to make this arrangement work, and that she doesn’t want others meddling in her affairs.

When she gets caught and a social carer agrees to take Gabby off her hands, Cheli suddenly has time to do all the things that she’s had to forgo, such as meeting a man. When Zohar (Yaakov Zada Daniel) enters the frame, she suddenly finds herself in an awkward love triangle that’s she’s tempted to break in order to secure a happy and carefree life for herself. A shared sisterly bath turns from playful fooling to a near-murder when a Chelli considers how easy it would be to end her sister’s life.

It’s an intriguing and dramatic situation, though in the end director Korman (aided by Ben-Shlush’s impressive screenplay) opts for retaining a soapy levity rather than wallowing in the depressive state of its central character. Visually, it’s not doing anything out of the ordinary, but what’s most impressive about Next To Her, however, is that it does not preach or claim to offer any clear solutions to a widespread problem which is too often swept under the rug.

This one has been a long time on the festival circuit.

A simple, clear-sighted drama which never attempts to convince it has all the solutions.

Memorable for Liron Ben-Shlush and Liat Goren’s performances, plus a great final shot.