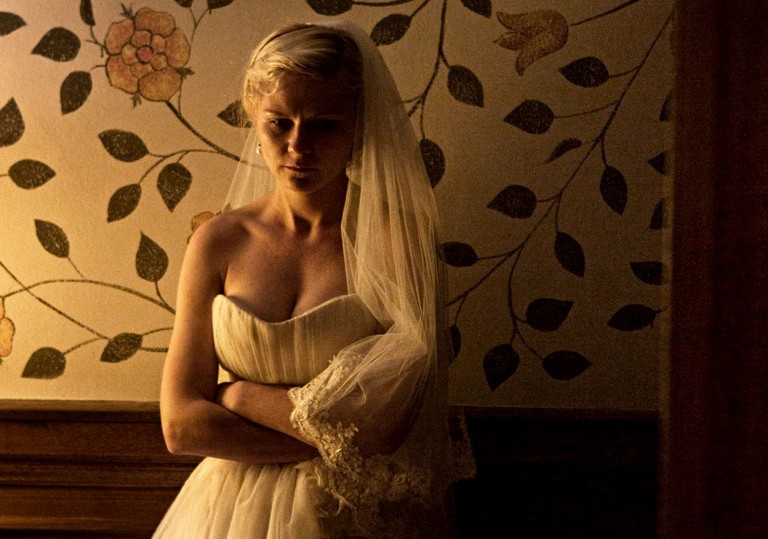 You can be sure of only one thing with LvT: it won’t be boring.

Is it just us, or is this a little bit boring?

There’s something powerful here, but Melancholia hasn’t quite managed to force it through the screen.

If filmmaking is therapy for Lars von Trier, you have to worry just how well his self-publicised battle with depression is going. A couple of months after Terrence Malick’s The Tree of Life showed us the beginning of the universe, von Trier’s ominously named Melancholia gives us the end of the world. It’s a disaster movie. It’s a double-disaster movie, in fact. It’s Danish dogme classic Festen colliding with Hollywood meteor-melodrama Deep Impact.

Just as he did with horror-shocker Antichrist, von Trier opens with a gorgeous slo-mo prelude. A hypnotically beautiful image of Kirsten Dunst’s face fills the screen, followed by a montage of strange, striking images. A golf course showing Hole 19. A distant galaxy. A horse stumbling. Dunst floating in water.

Then it begins for real, with a lovely, witty scene that proves to be better than much of what follows: a newly married couple played by Dunst and True Blood’s Alexander Skarsgård struggle to reverse their car up a path. But if Melancholia promises to fluctuate deftly between the cosmic and the intimate, it actually proves to be as blunt as its two-handed structure.

Part I (‘Justine’) reveals Dunst to be a crushingly depressed woman whose lavish wedding rapidly peels apart along with her psyche. Part II (‘Claire’) sees her straight-laced sister Charlotte Gainsbourg and her scientist husband Kiefer Sutherland discover that the mysterious planet Melancholia is on an apocalyptic crash-course with Earth.

As the giant planet brings death from above, looming larger and larger in the sky with magnetic metaphorical force, Gainsbourg shatters into a panic while Dunst accepts their fate with unnerving Zen.

Floating on tides of grandiose Wagnerian music, von Trier’s cosmic spectacle is another fascinating dose of metaphor and therapy for his own much-talked-about and often-doubted private troubles. But the spurting blood, talking foxes and body horror of Antichrist have now been replaced with a strange calm that threatens to teeter into boredom.

Likewise, Dunst’s performance – which won her a Best Actress award at Cannes, despite being written for Penélope Cruz – is too insular to fully engage the audience’s empathy. No question, Melancholia is incredibly eerie, and is lent an exciting frisson by the authenticity of an actress and filmmaker with first-hand experiences of psychological trauma.

Everything, though, feels too far out of reach. Only Manuel Alberto Claro’s beautiful, dreamy cinematography conjures up any sense of rapture. Is the entire planet heading towards blank oblivion? Or is it just inside von Trier’s head. We’re not too sure which would be worse.

You can be sure of only one thing with LvT: it won’t be boring.

Is it just us, or is this a little bit boring?

There’s something powerful here, but Melancholia hasn’t quite managed to force it through the screen.