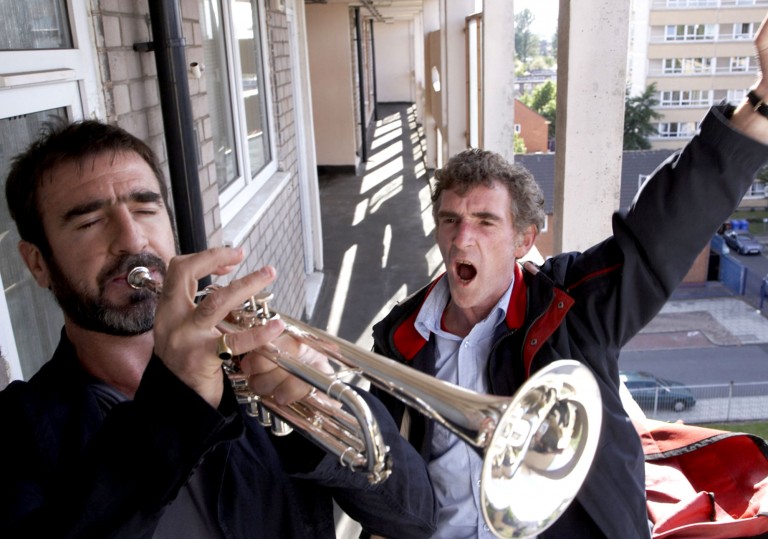 Footballers-turned-actors aren’t usually a mark of quality. But Cantona? In a Ken Loach film? This, we have to see.

It’s got all the heart and humour of a mainstream comedy-drama, with none of the tedious predictability.

Ken Loach, maker of worthy pieces of social realism. Admirable, but not much fun on a Saturday night at the multiplex – right? Wrong. And Looking for Eric is the film that will prove it. As genuinely entertaining as it is politically relevant, it’s the feel-good hit of the summer. No, seriously.

Eric Bishop (played by local Mancunian actor, Steve Evets) is a postman and Man U supporter on the edge of a nervous breakdown. He never got over his divorce from his first wife; his second wife has left him in loco parentis for two wayward stepsons; and now he’s having visions of Eric Cantona. Is this the first sign of madness? Or are the wise words of the charismatic Frenchman just what Eric needs?

It’s often forgotten, but many of Loach’s films contain humour – the football pitch scene in Kes ranks among the comedic greats – but you’d have to go back to 1991’s Riff-Raff for something as laugh-out-loud funny as Looking for Eric. John Henshaw (the fat guy from the Post Office ads) is great as Meatballs, the de facto leader of Bishop’s gang of fellow posties.

Between them they come up with a way out of Bishop’s fix, and it’s from their scenes together that the film derives much of its heart and humour. This isn’t just a little sugar to sweeten the bitter pill of Loach’s message, though. It is his message. As Cantona sums up: “You must trust your teammates. Always.”

So far, so Full Monty. Then just when you think you’re watching a familiar tale of male camaraderie, the plot veers off in a wonderfully unexpected direction. Loach and his screenwriter Paul Laverty have introduced thriller-esque plotlines before with less success.

The gangster elements of My Name is Joe felt like genre film cliché plonked in an otherwise realistic film. This time, though, they make it work by minimising the villains’ on-screen time (never Loach’s most nuanced characters) and sticking to action which feels entirely plausible in modern-day Manchester.

You expect note-perfect naturalism from Loach, but Looking for Eric also has all the baffling charm of a genuine oddity. The casting of Cantona is bizarre in itself, but his role as a kind of therapist-cum-guardian angel also injects an enchanting note of Capra-esque whimsy. It’s an odd combo, but it works.

Successful on several levels, Looking for Eric is powerful enough to satisfy Loach loyalists, and appealing enough to win over everyone else – if they would only go to see it. As Ken Loach has spent a 40-year career demonstrating, there’s little justice in this world, but if there was, this would be a massive, world-beating hit.

Footballers-turned-actors aren’t usually a mark of quality. But Cantona? In a Ken Loach film? This, we have to see.

It’s got all the heart and humour of a mainstream comedy-drama, with none of the tedious predictability.