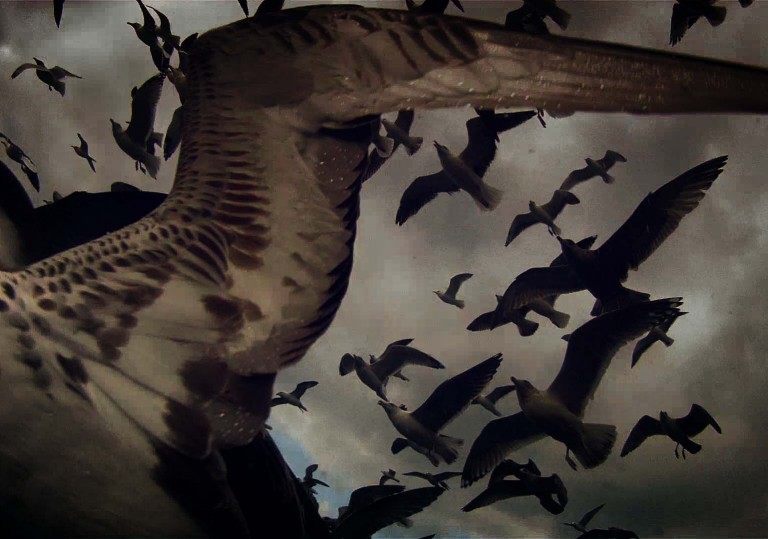 Great festival buzz, but a long delay before it made its way to the UK.

When we say it’s like nothing else you've seen, you've really got to take our word for it.

A Rorschach blot that resembles seagulls and fish guts.

The proliferation of patrician bastards and soapbox reactionaries is leading to the slow but systematic de-glamourisation of smoking on screen. The catalyst for this is based on a fantasy that The Kids might deign to watch À bout de souffle, pool their pocket money then dash down to the newsagents for a deck of Gauloise Blondes. And it rumbles on, with the plethora of negative editorial coverage aimed at Hayao Miyazaki for his swansong movie, The Wind Rises, a luxuriant and self-consciously antiquated period biopic in which its subject puffs on cigarettes for much of the movie, even (surely amusingly!) in the company of his tubercular girlfriend.

The adverse health risks of smoking are not up for dispute, but (and this is probably part of a longer discussion for another time), its depiction in cinema has altered since the days where a cigarette was little more than an extension of the actor’s body, a sixth finger if you will. You see fulsome plumes of cigarette smoke in black and white movies and wonder whether it’s a fashion of the time or it’s maybe an aesthetic tool used by cinematographers to put some flesh on the light.

Leviathan, an experimental fishing documentary by Véréna Paravel and Lucien Castaing-Taylor (Sweetgrass), shows smoking as a working class activity, vital to the wellbeing of the men whose hard work it documents so creatively. But it also taps into the purely aesthetic qualities of smoking too, as the fug caused by burning tobacco helps to bolster a picture of the literal living hell the directors are attempting to depict.

Lashed by the driving rain, bothered by insatiable fleets of seagulls and at the instant mercy of semi-audible instructions barked by a slovenly shift leader, the work the men in this film do is undertaken usually with cigarette dangling rakishly from chapped bottom lip. Among other great things, Leviathan is a film which places smoking in perhaps its only socially acceptable context — an opiate of the people that helps dull the pain of extreme hard labour. It’s even seen as a romantic, post-coital treat, something to suck on after extreme, intense exertion.

Even the most ultra fascistic of health freak would find it hard to deny these men their well-earned cancer sticks. When you’re alone at sea, they are everything. They are the world. They are friends. They are moments away from the horrendous grind. This is a song to the working man, a Battleship Potemkin for the age of spray cheese and impulsive tattooing.

Paravel and Castaing-Taylor eliminate the romantic allure of smoking just as they toy with notions that a job is a noble way to see out your days. Unlike a conventional documentary, these men are not transformed into characters to create an erroneous drama. Even though it allows us to infer rich social detail from the shape of the bodies, the dirt on their skin, the food they eat and the way they talk, the film is not about them. They are shown as faceless components of a more complex, but strangely tangible eco-system, and their mere presence adds to the texture of the movie as a whole.

Leviathan was made with the collaboration of the Harvard Sensory Ethnography Lab whose aim is to develop innovative new ways of chronicling people and landscape. It takes advantage of super-compact GoPro cameras which are roughly the size of – ironically – a pack of cigarettes. Instantly, the timeworn logistics of the filmmaking process have been altered: subjects no-longer have the stigma of a “camera” to contend with, there is no ’action’ and no ’cut’, and they’re able to go about their business without feeling like they need to create a cinematic character and earn their place in the limelight.

The film does have a CCTV feel to it, though these cameras also capture sound and are incredibly mobile. In its most extraordinary sequence, a GoPro camera appears to be attached to a long pole and is dipped into the water from the moving boat. We oscillate between images of sea life and bloody, discarded chum, to the omnipresent retinue of squawking gulls who are poised to sweep all the floating detritus. Visually, it’s a wonder, while also offering a grim alternative encapsulation of how the food chain works. God knows whether Paravel and Castaing-Taylor knew it would actually turn out like this, whether they had control of their images, but the sense liberty and the mere fact that they’re opting for methods that no-one else has used before is in itself exhilarating.

There is so much in this film to ponder with regard to how it was made and what it’s saying. In showing the realities of deep sea fishing and allowing viewers a so-close-you-can-touch/taste/hear/smell-it vision of life on a commercial schooner, the film fills a kind of tacit educational remit. When the camera takes a delve into a vat of disembodied fish carcasses, then proceeds to follow the discarded appendages and blubber as they gently slide back into the sea, we’re even planted momentarily in the realms of science fiction or horror — the creatures we see, the shapes of their bodies, don’t look like anything from this Earth. Would the acid-fried ’head’ movie set warm to Leviathan? Even though it works on those terms, probably not. It’d have them jumping ship in abject terror.

Great festival buzz, but a long delay before it made its way to the UK.

When we say it’s like nothing else you've seen, you've really got to take our word for it.

A Rorschach blot that resembles seagulls and fish guts.