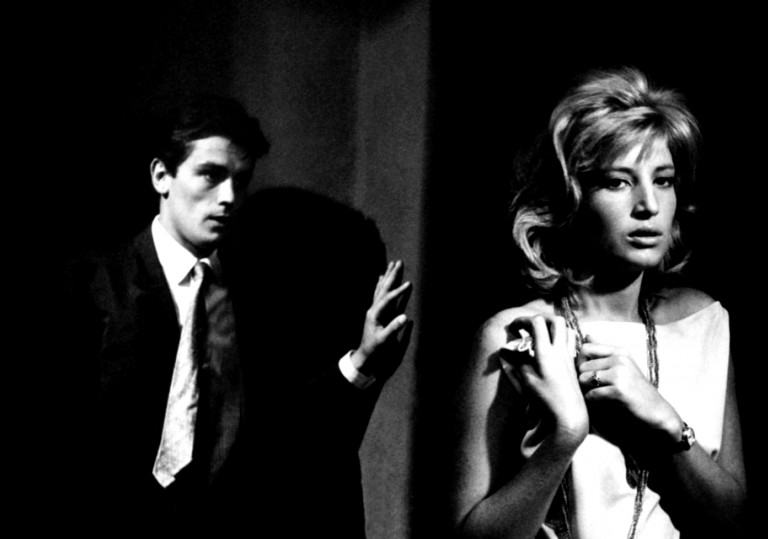 One of Michaelangelo Antonioni’s many masterworks.

One of the all-time greats. Missing it would be a form of self-abuse.

Michaelangelo Antonioni’s 1962 masterwork concerns this human paradox, but also offers a commentary on what those “forces” may consist of. L’Eclisse says that the world is merely a distraction from the serious business of love, that walls, doors, jobs, clothes, streets, parks, trees, cars and pretty much all physical matter – including cork facepaint – double (beyond their prime function) as a barrier between the pure formulation of a meaningful romantic connection and our own listless factory setting. It’s a bittersweet film, about the impossibility of love, the impossibility of romance, the impossibility of ever connecting with another person on anything more than a primal level.

Monica Vitti’s Vittoria is seen ditching her boyfriend, and then is quickly thrown together with Alain Delon’s dick-swinging stock trader, Piero. There’s flirtatious patter and light canoodling as they gambol around the streets of Rome, lapping up one another’s company. It takes time for them to reach the point where a third-party viewer can see that they have developed a bond, as if they’re doubting their own potential, as if they know that the odds are against them being happy and that disappointment ensues. What’s the point of it all? We’re just specks of dust floating through an indifferent galaxy towards oblivion? Why bother?

As this tenuous love affair plays out and reaches a point that appears to be its apex, the couple just drift apart. Like that. They have a point at which they plan to meet, and neither bothers showing up. For the grand finale, Antonioni treats us to one of cinema’s most staggering cosmic finales, a journey through time, space and consciousness that beat 2001: A Space Odyssey to the punch by some six years.

Suddenly, it is revealed that this empty street corner is the subject of the film. That nothingness – the missed connection – is what it’s all about. The camera then monitors the surroundings before settling on a street lamp, a glaring signifier for the fiery death of mankind.

One of Michaelangelo Antonioni’s many masterworks.

One of the all-time greats. Missing it would be a form of self-abuse.