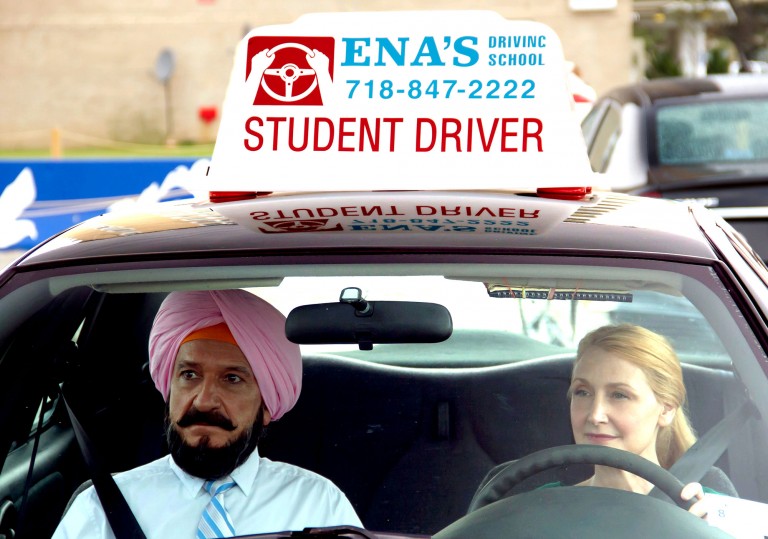 Isabel Coixet is not really known as a safe pair of hands.

A film that glides entirely on the charisma of its performers.

Very sweet when it’s not being unnecessarily outraged.

Patricia Clarkson and Ben Kingsley make for a likeable pairing in this breezy motoring drama.

There’s an argument to be made that Patricia Clarkson should be in every movie that drops off the production line. If not every movie, then at least more filmmakers should take advantage of her effortless on-screen magnetism and easy maternal charm. She is one of those actors who is best at playing Patricia Clarkson (or derivatives thereof), but we give Bill Murray a pass for doing just that, so why not Patty?

Here she plays a softly-spoken and somewhat jittery literary critic who arrives at a crossroads in her life when her husband decides to break off their marriage. Luckily for her, he announces his intentions while sat in the back of a cab being driven by Ben Kingsley’s Darwan, a one-time asylum seeker who works day and night to makes ends meet. In the daylight hours he plies his trade as a driving instructor, and Clarkson’s distraught Wendy is fondly coerced into becoming his student as a way of confronting her fear of the road.

The film is lightness and fluff incarnate, a breezy almost-romance with a squelchy side order of liberal outrage. While Wendy analyses the reasons for her split and tries to make embarrassing amends with her soon-to-be ex-husband, Darwan is subject to racial profiling, street attacks and even an arranged marriage, all of which he balefully takes on the chin, eternally thankful for having been granted American citizenship.

The public abuse is laid on strong, with director Isabel Coixet and screenwriter Sarah Kernochan apparently believing that all those sitting outside their small central circle of characters is a violent, bigoted paranoiac who thinks that immigrants are out to slaughter you and your family. Overly cute though they are, the film’s finest moments are the lessons, in which Darwan’s teaching method encompasses dropping all manner of Zen-like wisdom bombs. It helps that Clarkson and Kingsley make for such a darling central pairing.

Isabel Coixet is not really known as a safe pair of hands.

A film that glides entirely on the charisma of its performers.

Very sweet when it’s not being unnecessarily outraged.