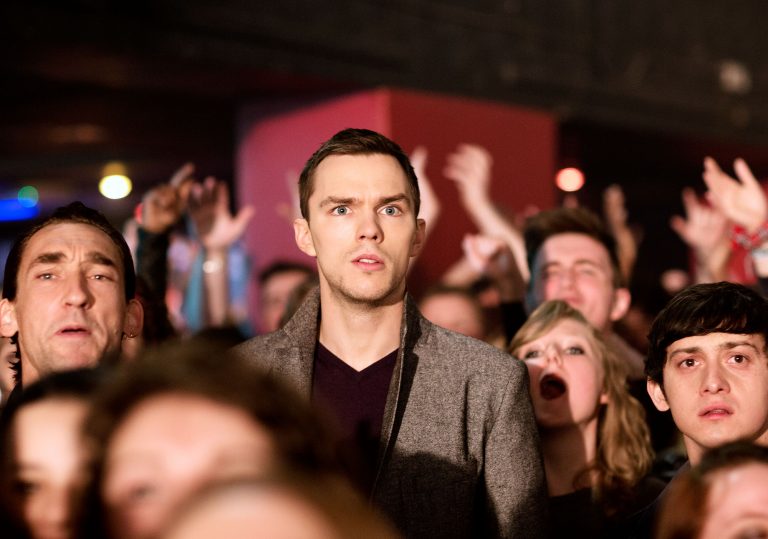 A film that wants you to hate it and achieves that aim.

Will likely wear its one-star reviews as a badge of honour.

Owen Harris’ Kill Your Friends is a film which dares the viewer to utterly despise its every frame. Its raison d’être is to evoke unadulterated contempt – of people, of places, of trends, of art, of business, of everyone and everything. Its cocksure cynicism is precision primed to alienate.

It’s a film which scribbles a chalk penis on the back of your jacket, nudges you into a job interview and then Periscopes the event from the corridor. Entirely in line with its unambiguous aims, this film does manage to inspire a sense of utter, putrefying revulsion towards it. The sheer, all-encompassing breadth of its casual abhorrence was in itself a feat. If you get a kick out of spending time with some of history’s most repellant shitbags, then Kill Your Friends is a double lottery win. Does the fact that this film achieves what it sets out to do make it a success? Yes and no. Even when you’re painting with dog shit, it’s always possible to produce an ugly picture – just as it’s equally possible to produce a pretty one. This one is a panoramic brown eyesore.

Kill Your Friends runs with the vague and unconvincing assumption that there were certain parties within the British music industry of the mid- to-late ’90s who managed to coast along – excel, even – without expending an ounce of brain power. It was simply a case of careerist nit-wits making plays that were likely to get them a promotion, or nobble over one of their equally power hungry colleagues.

Nicholas Hoult plays charmless tosspiece Steven Stelfox – the slick ladder-climber who is bracingly honest about his complete dearth of professional nous and disinterest in the high-stakes world of music A&R. A voiceover narration states this point-blank were there any ambiguity over the matter, and this is intended as a way to help us empathise with Stelfox as he’s being forthright about his modest capabilities. Weak parodies of real bands are paraded through the offices, observations about how they’re fame-hungry parasites are passed off as cutting cultural commentary.

A jolly to Cannes to find the next big superhit results in Stelfox picking up the rights to an awful, X-rated house tune when he sees people dancing to it in a club. He sees this high-risk ploy as a way to impress his bosses – his impulse that the public at large will eat up any old rubbish is shared by the filmmakers. It’s such a tin-eared, hollow, sneering depiction of the era that nothing even vaguely resembling valuable insight lands.

What someone has then done is read Bret Easton Ellis’ American Psycho and taken its (admittedly strident) satirical intent at face value, as the second half of the film focuses on Stelfox’s transformation from cheeky chancer to actual homicidal maniac. With no sign that any of this should be consumed as an anti-corporate allegory, the film piles up the unlikely twists, the bumbling one-note characters and the “clever” set-pieces which exist to emphasise the sickening extent of Stelfox’s Machiavellian moxie. Bad writing and blind chance conspire to keep our hero out of prison. No-one cares what he’s doing – and that’s the joke.

Underneath the smile and the pluck, everyone is a self-serving, narcissistic cretin. Not only does this film want you to hate every fibre of its being, it hates you right back. Thanks.

A film that wants you to hate it and achieves that aim.

Will likely wear its one-star reviews as a badge of honour.