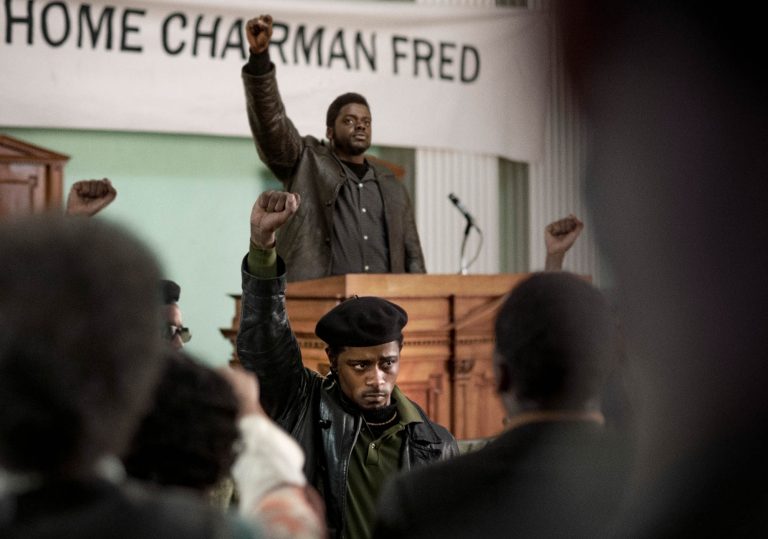 Fred Hampton was 21 when the FBI murdered him. He had been betrayed by William O’Neal, an FBI informant who spent the final year of Fred’s life infiltrating his inner circle. Shaka King’s audacious biopic imagines this episode as both a neo-noir thriller and a parable of biblical tragedy.

The dual roles of Judas and Messiah are assigned to LaKeith Stanfield and Daniel Kaluuya, who embody these archetypes in career-defining performances. The jutting angles of Stanfield’s face around his large, sorrowful eyes, as well as his long, lean limbs, evoke a haunted, conflicted, jittery energy unlike anything we’ve seen from him before. At times, he seems to transform into a literal serpent, slithering out of conflict with narrow hips encased in shiny leather.

Hampton was a man of rare charisma and strength who galvanised and united disparate and dispossessed people to fight together against poverty, corruption and police brutality. Kaluuya, an actor of innate magnetism, fully disappears into Hampton, having beefed up his physique and absorbed his cadence, posture and gait. Every line he speaks is imbued with heft and spirituality, and Kaluuya clips the consonants while lengthening and luxuriating in the vowels to create a captivating musical lilt. This role is a huge step up for him in a quick march towards becoming one of the finest actors of his generation.

The complexity of the Black Panthers’ mission is at the core of this film. As O’Neal succinctly puts it to his FBI handler, “These motherfuckers ain’t no terrorists”. They pore over political theory, earnestly analysing the struggle at school desks arranged in neat rows, and wear hairnets to distribute free breakfasts for poor children. They adopt paramilitary behaviour, walk in tight formation with their iconic black berets protruding at identically precise angles. They are at once an intimidating force to be reckoned with as well a bunch of young idealistic nerds who shoulder more of the burden of societal evil than they can handle.

As the tragedy unfolds, the confidence and style of King’s filmmaking doubles down. The composition of each moment is thoughtful and beautiful with eerie fluorescence and dynamic camerawork adding to the film’s electric atmosphere. The director paints in shadow and allows the imagination to fill in scenes of violence without leaving space for ambiguity. There is breathtaking tension and a sense of devastation that is, at times, almost unbearable. The soundtrack ramps up these moments with a spare, percussive score, heightened by a single strum of a bass or tap on a snare.

The supporting cast is uniformly strong, with Jesse Plemons as an FBI agent embodying the banality of evil, and Martin Sheen as J Edgar Hoover who, despite an inexplicable prosthetic nose, captures the perversion of his white supremacy and preoccupation with the virility of Black men. Best of all is Dominique Fishback as Hampton’s girlfriend Deborah, who projects intelligence and gentle strength through the warmth of her performance.

The film’s final moments offer a devastating call to arms that highlight the righteous legacy of Hampton. As a Black Messiah he bore the weight of the world’s sins and was subject to the worst of its brutality. And yet, his message endures: “You can murder a revolutionary but you can’t murder a revolution.”