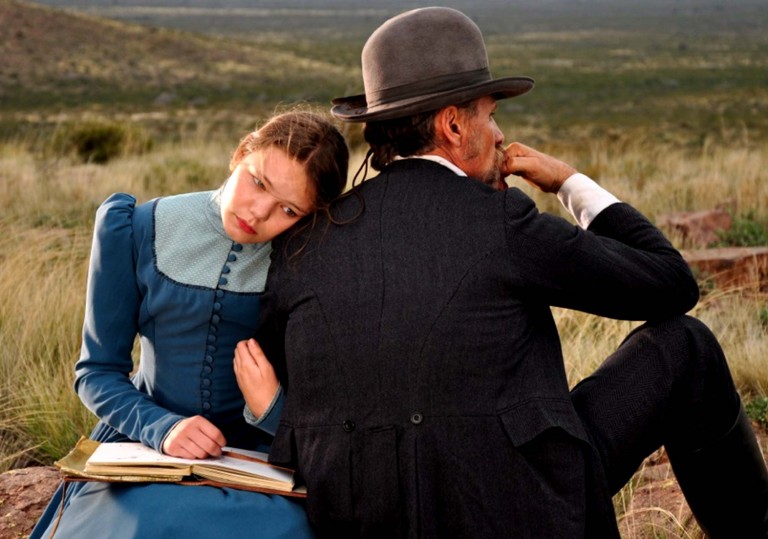 Miraculous. Blithely does its own thing, but with staggering assurance and artistry.

A man ambles across a largely barren landscape in search of some unknown destiny. This short description of Lisandro Alonso’s latest feature, Jauja, would also fill in for every one of his previous four, spanning from 2001’s La Libertad through to 2008’s Liverpool, suggesting an artist who is uniquely attracted to lone, primal struggles against the sublime indifference of the natural world. These intimate, inchoate journeys translate as cosmic allegories for the variety and mystery of human existence. They often tap anthropological depths, less celebrations of coarse manhood and more examinations of what it means to be a man.

A teenage girl (Viilbjørk Malling Agger) asks that her father, Captain Dinesen (Viggo Mortensen), buy her a puppy, one that will follow her wherever she goes. He says he’ll consider it when they return to their native Denmark, as they’re currently waylaid on a torturous expedition in Southern Argentina. Though Alonso rigs the narrative so interpretation remains fluid throughout, one could read Jauja as a simple philosophical expression of a dog blindly following the girl, Ingeborg, as she flees with a secret lover into the wilds of Patagonia. This film is a reimagining of ‘Alice’s Adventures in Wonderland’ where the white rabbit leads the way to a dread wasteland of tinpot cannibal overlords, fetid bogs, dream caves and terrains whose formulation and topography appear to openly mock those who attempt to conquer them.

Call it calculated caution, but the beauty of this film comes from its patent refusal to say what it is and what it’s about, resulting in a perpetual sense of renewed intrigue and a constant hunger for the fragments of story to neatly interlock. In a world divested of conventional meaning, banal objects such as a toy soldier or a mangy mutt somehow become vital totems of significance even though it’s never certain how or why.

The film is shot by Aki Kaurismäki’s regular cinematographer Timo Salminen in boxy 1:33 aspect ratio with the corners of the frame curved to suggest early photography tests redolent of the story’s 19th century setting. There are two or three shots in which the camera moves, but Dinesen’s trek is captured mostly through static, fastidiously composed tableaux in which he trudges from one edge of the frame to the other and via a variety of obscure angles and vantages.

Though there are vague suggestions that Dinesen may have died, may be dreaming or is possibly even the embodiment of someone else’s dream, Jauja is a film that recognises that all of the above possibilities constitute the essence of what cinema is. A composition, the placing of a camera or the depth of the focus can suddenly transform a gorgeous vista into a remote nightmare.

A genius performance by Mortensen sees him not only fully commit to the logic and manners of a “real” time and place in history, but there retains an omnipresent glimmer – like a shimmering star in the night sky – that he’s also fully aware of this fanciful and eccentric trial by cinema.

Miraculous. Blithely does its own thing, but with staggering assurance and artistry.