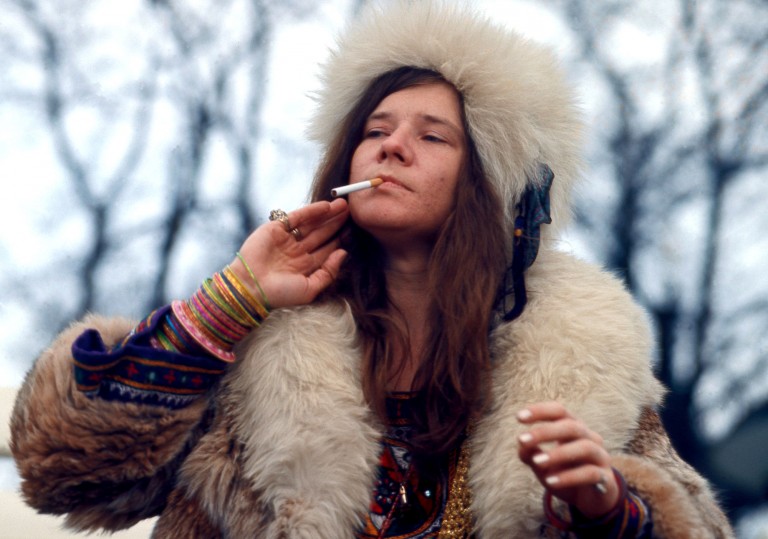 Break another little piece of my heart now, darling.

As a young girl, I heard my mother screaming along to a tape recording of Janis Joplin’s ‘Piece of My Heart’. It was shocking confirmation that a parent hadn’t consigned emotions to a neat filing cabinet labeled ‘The Past’. I may as well have heard her having sex for all the yearning those shrill notes revealed. From a child’s perspective it was pure embarrassment.

The pain of desire and the release of emoting was central to the singer Janis Joplin until she died from a heroin overdose at 27. Amy Berg’s documentary portrait charts and contextualises her tumultuous time on earth while keeping the art of raw expression as a key note. Joplin’s own words are a trail of breadcrumbs in the form of letters home to middle-class Texan parents. Like a good girl, she kept them in the loop as she went from singing the blues on the fringes to the heart of ’60s rock ’n’ roll. Chan Marshall (aka Cat Power) narrates extracts in her childlike southern tone. The words are earnest and evoke a more innocent time when hippy terms like ‘man’ and ‘groovy’ could be spoken without inverted commas.

A tone of tenderness and respect is maintained across interviews with family, friends, band members and lovers. All knew of her insatiable need to be loved. It was a force that underpinned and loaded her career ambitions. A soft woman emerges. Her singing voice may have sounded like a soul cut by sandpaper, but her speaking voice was polite and gentle. Rolling Stone’s David Dalton described Janis as having: “Almost a Huck Finn innocence. The absolute woman-child ideal of the Haight.”

The scene’s values help us understand the woman who blossomed out of it. We are given a lively glimpse of a time when Haight-Ashbury in San Francisco was the centre of the once feted, now dated ideals of mind-expanding drug-taking and free love. Drugs and sex were not lasting enough for Joplin, and the film’s steady momentum reflects this – freewheeling energy is corralled by concrete events.

We are introduced to Janis growing up as a social outsider in Port Arthur, Texas. Her pain at being bullied and desire for acceptance drove her ever onward: to Austin to sing the blues, home again to recover from meth addiction, to California to join Big Brother and the Holding Company, then stardom at the Monterey festival and relationships with musicians. Her heroin addiction is presented with a non-judgmental sadness. Everyone knew she used. Everyone has a soulful theory as to why. We hear about her shooting up while chatting with friends at the Chelsea Hotel. (Leonard Cohen wrote a song for her called ‘Chelsea Hotel’.)

Music sourced from live performances, from on the road and in recording sessions punctuates every biographical episode. Janis’ voice lasers through bullshit leaving only something quivering and naked and real. The primal heart powering her singing erases time and puts me back in my childhood home listening to my mother screaming the blues. Both women are now dead but the emotion behind the music will never die. Amy Berg is a bold director to recognise and channel intangible feelings of longing in this apt, tragic and inspiring documentary.

Break another little piece of my heart now, darling.