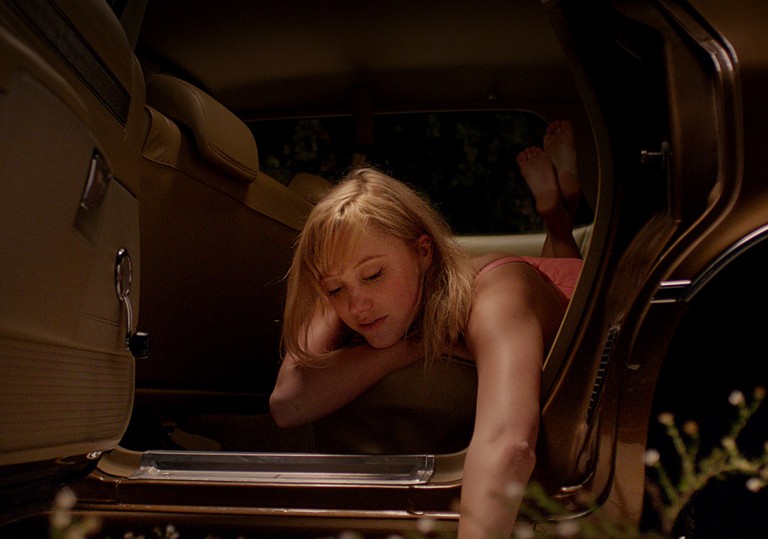 The buzz from Cannes was loud.

Waiting is scary in this mature, character-based horror.

In a single, sinuous take, the camera circles a middle-class suburban street as panicky-looking-teenager Annie (Bailey Spry) runs out of her house, constantly looking over her shoulder and unconvincingly brushing aside a confused neighbour’s concern. Annie drives off, and we next see her sitting on a beach alone at night, on the phone telling her dad that she loves him and apologising for past misdemeanours. In this hasty goodbye to childhood, Annie occupies a literally littoral space, yet does not seem quite ready to face the infinite ocean at her back. Come the dawn, Annie is just a mangled, corpse, lying bloody on the sand.

This opening to writer/director David Robert Mitchell’s It Follows establishes its generic allegiance to horror, while also introducing water as the film’s most fluid of recurring symbols. When we first meet 19-year-old protagonist Jay (Maika Monroe), she is floating, bikinied, in the bounded waters of a small backyard pool. On the cusp of adulthood, she is still contained within the protective environment of a suburban family home, yet old enough to be the sexualised object of the male gaze (in this case shared with two spying local boys).

After having sex with her older boyfriend (Jake Weary), Jay discovers that he has deliberately passed on to her an infectious affliction. Something relentless, protean and deadly is now following her and will eventually catch up – although she can slow its progress by transmitting the infection sexually to others. Jay seeks to evade, maybe even defeat, the ‘it’ of the title, travelling from the relative security of the leafy suburbs to the forbidden urban decay across town, and from her paddling pool to the bigger public pool (where she had her first teen kiss and drink) to the beach and the altogether more dangerous waters beyond.

With all these boundaries being transgressed, It Follows offers anxious coming-of-age drama, as Jay, her younger sister, Kelly (Lili Sepe), and their best friends depart from the Eden of childhood for a first dip into their own decline and mortality. Set in a Detroit that could be from today or from 30 years ago, with Disasterpeace’s John Carpenter-esque synth score further muddying the chronological waters, the film exhibits the same dreamy preoccupation with teenage rites of passage as its writer/ director’s lyrical 2010 debut The Myth of the American Sleepover.

Viewed purely as a monster movie, this is creepily tense and often surreal, with one of the most ickily Freudian scenes of body horror in memory. Yet, unusually for the genre, these young teens are all likeable and genuinely look out for each other, keeping viewers closely engaged with their fates. The monstrous antagonist here is all new – and yet so ancient as to be timeless – and the film positively shimmers within its own metaphorical glow.

For not unlike the Russian novel that one of Jay’s teenaged friends reads throughout, It Follows unremittingly pursues the two greatest themes in both art and life, as its adolescent kids learn to stave off with sex, however temporarily, the ineluctable approach of death. Most of all though, this is a film about waiting: for adulthood, experience and annihilation.

The buzz from Cannes was loud.

Waiting is scary in this mature, character-based horror.