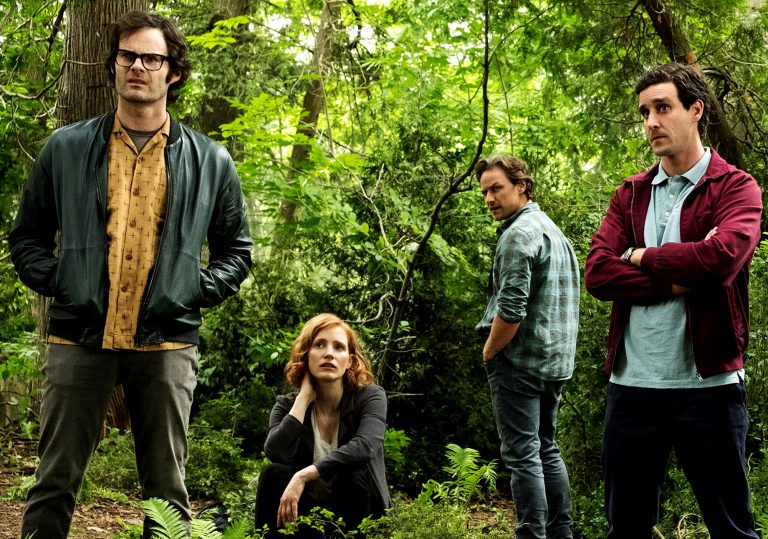 It (Chapter One) was alright.

Time stands still in more ways than one as this dull rehash of Andy Muschietti’s 2017 horror overstays its welcome.

In Derry, Maine, time works in mysterious ways. It seems like only a couple of years ago that it was 1989, and Bill (Jaeden Lieberher), Beverly (Sophia Lillis), Ben (Jeremy Ray Taylor), Richie (Finn Wolfhard), Eddie (Jack Dylan Grazer), Stanley (Wyatt Oleff) and Mike (Chosen Jacobs) were banding together to form the Losers’ Club – a gang of misfits and underdogs united against not only small-town prejudice but also a demonic, child-eating resident evil (the ‘It’ of the title) that sometimes assumes the form of Pennywise the Clown (Bill Skarsgård).

Now, only two (but also 27) years later, the Losers are all grown-up, a diaspora of damaged adults still bearing the scars – both physical and psychological – of horrific childhood experience whose details they struggle even to remember. When It returns, once again going on a feeding frenzy through Derry’s weak and fearful, Mike (Isaiah Mustafa), who alone stayed behind in his childhood home, summons adult Bill (James McAvoy), Beverly (Jessica Chastain), Ben (Jay Ryan), Richie (Bill Hader), Eddie (James Ransone) and Stanley (Andy Bean) to face It once again.

Andy Muschietti’s IT Chapter Two brings back characters from the first chapter as they relive long-buried traumas and, through seamless match-cuts and CGI-smoothed transitions, re-encounter their childhood selves in moments of peak terror. This is in part a retread of the original film, going back over some familiar scenes while also interpolating new ones. The problem is that this adult ensemble, however well cast, is just less interesting to watch than their adolescent counterparts, even if their present situations still reflect their past.

Much, for example, as young Bill was impeded by a stammer from finishing his sentences, his adult incarnation is never able to find good endings for the books and screenplays that he writes. As a horror novelist, Bill is an obvious double for Stephen King, who wrote ‘It’ in 1986 – and as though to confirm their affinity, one scene here brings the two together, with King cameoing as a seller of second-hand goods (including a copy of one of Bill’s books).

“That’s why you’re here. To finish it. For good.” This is what Mike tells the reassembled Losers, making it clear that the bad endings of Bill’s books, or Beverly and Eddie’s inability to break free of toxic relationship patterns from when they were younger, or Richie’s struggle, for all his mouthiness, to express his true feelings, are all symptoms of a broader kind of unfinished business whose ultimate resolution is the inevitable endpoint of the It diptych. With one of the Losers quickly out of the picture, these are six characters in search of an ending.

It’s just a pity that this second chapter feels like a dull rehash of themes already well covered in the first. It is overindulgent of its characters, overextended in its duration, and by the time the sewer-set climax finally comes (and overstays its welcome), and is then followed by a lengthy Return of the King-style ‘long goodbye’ among the surviving characters, many viewers will have lost all patience.

Despite a panoply of digitally enhanced effects used to realise Pennywise’s grotesque transformations, first into the spider head from John Carpenter’s The Thing, and then into a gargantuan clown-arachnid hybrid, the shapeshifter is never more menacing than in one single, short-lived scene where he appears as a normal man donning greasepaint. Sometimes less is more – a lesson that any horror stretching to nearly three hours would do well to learn. In Derry, for this second instalment, time stops in more than one way.

It (Chapter One) was alright.