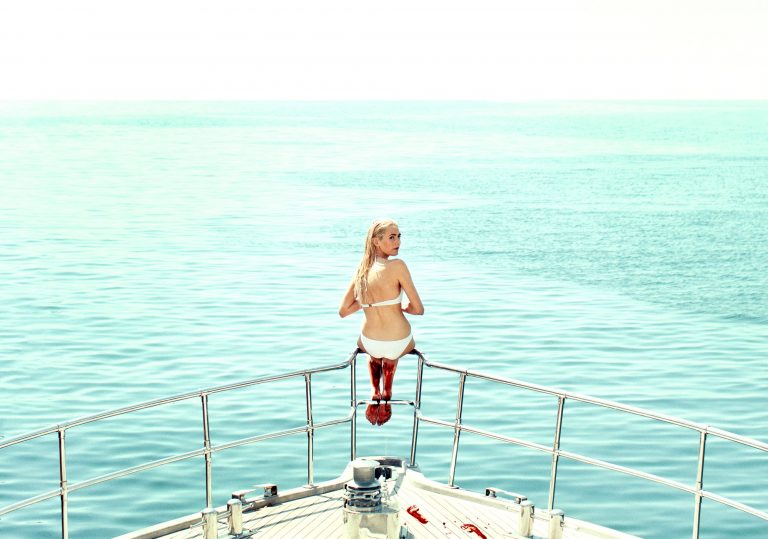 Whipped up a level of controversy since its 2018 Sundance premiere.

A very fine debut, if a little one-note.

Abuse of all styles and intensities feature in this chilling crime drama from the perspective of a gangster’s moll.

In 2010, the American director Kelly Reichardt made a revisionist take on the classic movie western called Meek’s Cutoff. It told of a wagon party on the Oregon trail and the inherent dangers of travelling across a largely barren, depopulated landscape. What makes the film unique is that, in this male-dominated genre, its story is from the perspective of the women who are pushed into domestic roles as the men plot their uncertain future.

With her impressive debut feature Holiday, Swedish-born director Isabella Eklöf applies a similar tack to the what you might call the low-rent gangster genre. This is petty drug dealing in a Turkish sun resort as seen through the eyes of funtime blonde, Sasha (Victoria Carmen Sonne). The title infers happiness, and a well-earned break from the drudgery of work, but it quickly becomes clear that swimming and clubbing is only half of what this small Scandinavian crew have on their mind.

As the camera never leaves Sasha’s orbit, the actual process of the deals largely occurs off camera. What we often see is the violent aftermath, such as when one of the bungling lieutenants leaves before a drop-off has been made, and receives a necessary beating from his higher-ups. This largely plotless study of unchecked machismo and female oppression leans a little too heavily on awkward, protracted meetings and conversations where some kind of explosive outburst seems to be the only recourse.

But you could in no way accuse Eklöf of slacking when it comes to her depictions of the casual abuse (physical, psychological, sexual) that Sasha receives at pretty-much five minute intervals throughout the film. And despite suggestions from its poster which shows Sasha in a one-piece bikini and standing coquettishly in a pool of blood, the film doesn’t just swerve into instant gratification revenger territory in its climactic reel. It’s well put together, and the entire crew deserve plaudits for their work. Though it does hammer home a single, fairly unimaginative point over and over.

Whipped up a level of controversy since its 2018 Sundance premiere.

A very fine debut, if a little one-note.