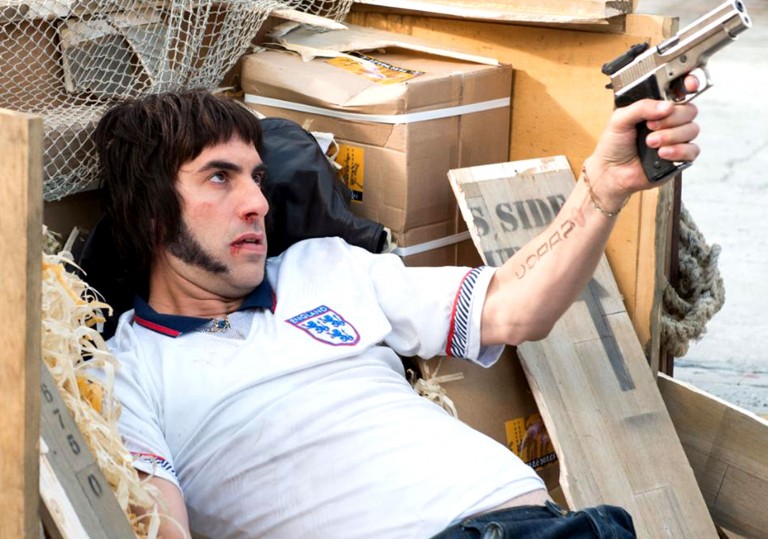 Cohen is always worth a look, but this one just doesn’t look at all good.

Feels like a film that’s based on a sitcom that doesn’t yet exist.

When Sacha Baron Cohen’s Borat character was first trailed on TV, there was an amazing sketch which saw this unreconstructed, Kazakhstan-based nincompoop meeting with the braying rah-rahs of the Henley Regatta. One lengthy, circuitous conversation chronicled his attempts to comprehend a species as-yet-unknown to him: the hippopotamus.

As he fires questions at an unsuspecting and increasingly irate gent, listlessly trying to understand how a hippo is anatomically different to a pig, the conversation hits peak absurdity. The shot lingers on, refusing to cut. The reason we laugh isn’t because of Borat or what he’s saying, it’s the fact that he’s cleverly backing his target into a corner, exposing prejudice and arrogance. Not in a spiteful way, just gently digging, digging and digging some more. And we all know that digging is hard work.

If Borat and its sporadically brilliant follow-up, Brüno, were Cohen’s comedy behemoths, equivalent to something like Austin Powers, then his latest work, Grimsby, is his answer to The Love Guru. Jokes fall flat with alarming regularity, like fireworks plunged into the puckered anuses of so many poor northern wastrels so as to impede their flight into glory. The taper is lit, the sparks fizz, and then… a whimper.

Cohen is an incredible live comedian – someone who is able to react to constantly altering surroundings. He is energised by surprise, never losing his cool or dropping his intricately-formulated façade. What he does is method acting in the classical sense, immersing himself in the public and passing himself off as a real person.

As a comedy character actor, Cohen stinks to high heaven. When making movies like Grimsby, his skill set doesn’t gel with the framework around it. Indeed, it’s physically repelled by it. His character here is called Nobby Butcher, a wide-eyed lout proud to live in relative penury in the northern town of Grimsby, which is depicted as some kind of gateway to Hell. He pines for the return of his brother, from who he was cruelly separated during youth.

Sebastian (Mark Strong), was adopted by wealthy southerners and his alternative life path lead him to death-defying black ops for MI6. The mis-matched pair are thrown together in haphazard fashion and are forced to team up to save the world. And though it may read like that last sentence was copied-and-pasted from an official press release, there really is no other way to encapsulate the film’s drab lack of narrative ambition.

The film is directed by Louis Leterrier, who is best known for his work on the first two Transporter films. Grimsby styles itself as an ‘action comedy’, and what it reveals is those two generic terms have absolutely no place sitting side by side. Action requires fast cutting, swift camera movements, sprinting pace, no quiet beats allowing time to catch the breath. Comedy is about the awkwardness of dead air, the reaction, the moment after the moment. It’s languorous, slow, considered. It’s about milking a tiny nuance. The two forms are polar opposites: they cancel one another out. (A very rare exception to this rule would be a film like Martin Brest’s Midnight Run). So with Grimsby we get neither the thrilling fluency of action nor the delicate choreography of comedy.

By its limp final stretch, it attempts to save face with a volley of cheap speechifying having spent an hour simply recycling poverty porn stereotypes. It purports to want to reinvigorate the tortured nobility of the English working classes (“scum”). Yet instead of trying to mine for any kind of empathy, worth or humanity, the film’s message is that the English working classes are slathering, lagered-up, drugged-up savages whose only use for a prophylactic involves weaponising it with the addition of a snooker ball. We should cherish them because they are vile, not because we’re misconstruing that vileness for something that’s worse than it is. Grimsby makes Wayne and Waynetta Slob look like Molière.

Cohen is always worth a look, but this one just doesn’t look at all good.

Feels like a film that’s based on a sitcom that doesn’t yet exist.