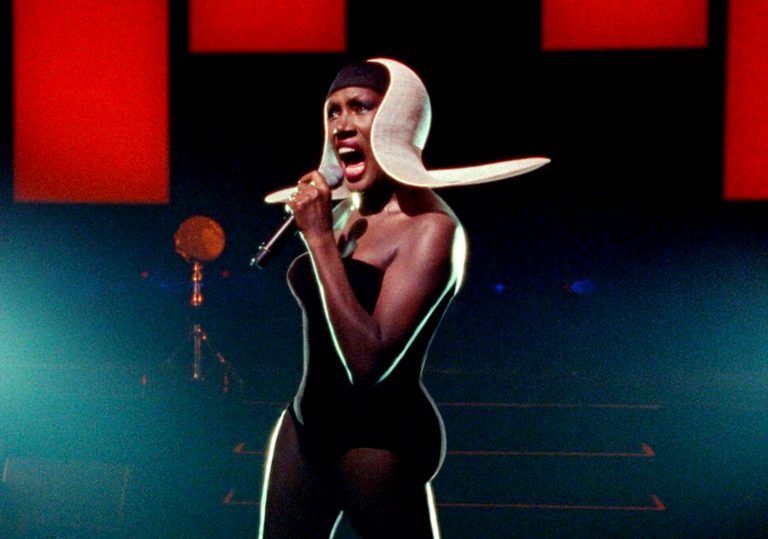 Jones is an artist who doesn’t always get the credit she deserves.

It’s awkward an ambling, but never less than interesting.

A unique way to encapsulate the life and character of an artist.

What a bizarre movie this is. It is a lightly experimental, purposefully rambling portrait of the Jamaican singer and fashion icon Grace Jones formulated over 10 years by the filmmaker Sophie Fiennes. It is discreet and disarming, jerking suddenly between scenes of almost deadpan comic torpor and terrifying flamboyance.

Superficial pleasures, memorable moments and insta-talking points are notable by their absence. But this is more about capturing a persona than it is her story. One hanger-on retiring with Jones back stage asks if she would hit him the way she famously struck the TV presenter Russell Harty live on air. The chilling, contemplative silence she leaves after his request is far more violent than any act of physical abuse.

Bloodlight and Bami is a film which has little interest in reeling off facts, offering disconnected slabs of context or allowing the subject to use the camera as a means to unload her worldview. That’s not to say that Jones isn’t hyper aware of the fact that she’s got a lens trained on her, but the state of being perpetually bathed in the limelight (and how that can affect a person) is what the film is about.

It’s nothing like the artist hagiographies that seem to drop down the chute weekly, and it’s not a straight up concert film, even though it’s scattered with (boringly filmed) live performances. The film it recalls is the deeply uncomfortable profile of David Bowie made in 1975 for the BBC’s Imagine… series called Cracker Actor in which he sits, monged out of his mind, and rattles off his surprisingly coherent theory about how Bowie is nothing more than a theatrical construct.

And throughout this film Jones appears to assume multiple personalities and slides seamlessly into different settings. It’s instantly striking that she is someone who always tries to meld into a backdrop, despite being one of the most aesthetically distinctive celebrities of the modern era.

When meeting with her parents in Jamaica, she sits and eats fish from a plastic basket and assumes a Jamaican patois. Then, later, when in Paris performing her disco hit ‘La Vie En Rose’ on what appears to be a cheapo shiny-floor light entertainment show, she slips between speaking French, and English with a slight French lilt. And when she arrives in New York for a gig, she applies her make-up, sips Champagne and talks like a pure Soho lifer.

Some moments border on the banal, and scenes often run and run to the point of tedium. It’s hard to know why a shot of Jones whining at producers Sly & Robbie down the phone remains in the film despite the funny sound of her British assistant begging her to not piss them off. Despite the fact that this is something of a shapeless morass, Fiennes does leave you – possibly by stealth – with a full and meticulous impression of this charismatic and exceptionally intelligent diva. And it’s a very different Grace Jones to the one you think you know already.

Jones is an artist who doesn’t always get the credit she deserves.

It’s awkward an ambling, but never less than interesting.

A unique way to encapsulate the life and character of an artist.