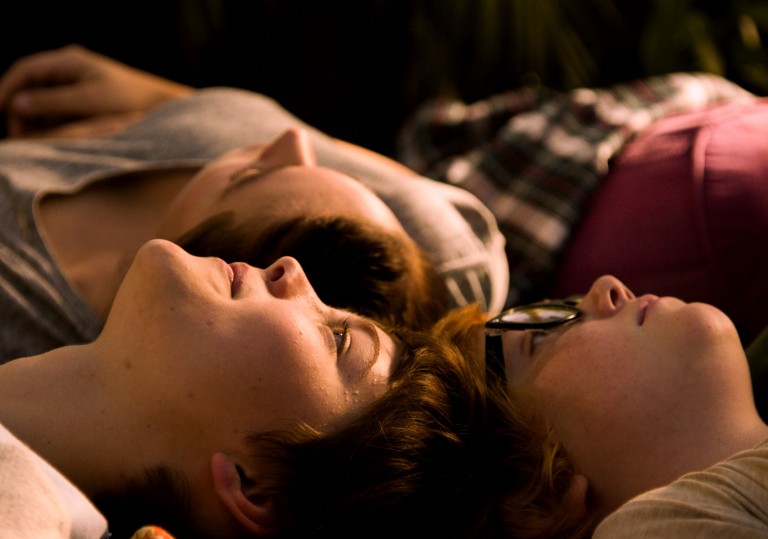 Who hasn’t wondered what it’d be like to switch genders for a bit?

An imaginative and touching drama that explores sexuality and gender identity with creative flair.

Successfully explores common themes through a unique yet simple concept.

What would you do if you could spend a few hours living as a different gender? Director Alexandra-Therese Keining’s Girls Lost answers this question and much more as it follows teen trio Kim (Tuva Jagell), Momo (Louise Nyvall) and Bella (Wilma Holmén) as they discover a mysterious enchanted plant that, when ingested, temporarily turns them into boys. But it’s not just their sex that changes, the world around them and their perception of it does too. The nectar of the flower infuses them with new-found confidence and spurs a drug-fuelled rebellion that frees them from their daily repressions.

Masks, lanterns, fairy lights and a bonfire in a forest at night – the girls dance under the moonlight to the twinkle of girlhood in a neon wilderness full of wonder and promise. But all is not as light-hearted as it seems. Targeted by sexist bullies that go as far as ganging up to try to rip Bella’s top off, the girls are in a fight to figure out who they really are.

Fenced into a murky world of violence, marginality and sexual confusion, the girls’ belief in the magical flower stems from a deeply rooted desire to be treated as equals. An androgynous and pretty character to begin with, the flower affirms Kim’s gender crisis and addresses transsexuality in a way that adds weight to what might otherwise seem a little basic. Accompanied by ’80s inspired synth, complete with shots of teens peddling hurriedly around their local suburban neighbourhood, there’s a clear nod to coming-of-age dramas of that era, but with a contemporary twist that spotlights LGBTQA+ issues.

The moon is an ever-present motif in the film that reflects the fear and mystery the girls face. Holding within it the totality of the feminine experience, the moon’s various cycles of change mirror the lives of the girls as they evolve and grow through their unique experiences. But do the girls embrace their femininity or reject it?

Who hasn’t wondered what it’d be like to switch genders for a bit?

An imaginative and touching drama that explores sexuality and gender identity with creative flair.

Successfully explores common themes through a unique yet simple concept.