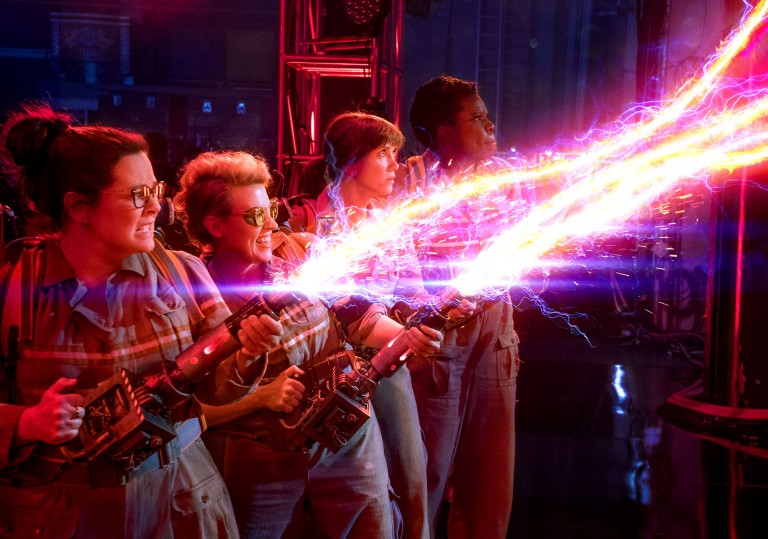 Fingers and toes crossed that it isn’t a disaster.

Can we just make Kate McKinnon our new god now?

It’s hard to recall when the repellant term “fan service” was first deployed as a way to describe the act of bowing down to the demands of the brand elite – those whose judgement of a product might be deemed the most harsh and, thus, the most important. Some may see it as a benign term, a sign of acknowledging public demand and, if not bending, then leaning lightly towards collective will. Yet, it also possesses an obvious sexual connotation, like you’re allowing the enterprise to be needlessly violated by self-appointed ambassadors who have convinced themselves that they are able to love a thing (often inanimate) more than another person can. These ‘fans’ are more commonly know as avid internet users.

You can now play a game of spot the toadying fan service, searching for those moments that clearly don’t belong in a film, which serve no clear function, which are entirely unnecessary, but are considered a vital deterrent for the knee-jerk e-bitching. Of the new Ghostbusters film, there are actual, real human people (likely bearded) who have claimed that recasting the central line-up of the original film as women is equivalent to squatting over their misspent childhoods and relaxing any and all of the groin muscles. Outraged progressive types, as per usual, were left to fight the good fight.

This is a really fun film, and at times very amusing. And yet the original series weighs around its neck like some ill-fitting phallic millstone. Attempts to associate this refresh to the fusty, musty original are almost contemptuous in their eye-rolling idiocy. Cameo appearances drop at regular intervals, evoking the same dread surges as when an eccentric uncle overdoes it on the Schnapps during Christmas lunch and/or a family wake. Perhaps by stealth, director Paul Feig has invented a form of bizarro fan service – namechecks to an original property that actually make you question whether it was any good in the first place. The chemistry between the four new leads is so great, that anything drawing you away from enjoying it can be considered a ghastly offence. Still, gotta keep the space nerds happy!

What makes this new film work is that it never draws attention to its own ingrained progressiveness. Women starring in a summer action movie should not be something that requires self congratulation, and Feig allows the material to speak for itself. Its politics are for the viewers to laud, not the makers. This film feels like it’s about something valuable and represents something real. Feig also knows where his strengths lie, and as such, much of the film is given over to comedy titans like Kristen Wiig and Melissa McCarthy just doing what they do best. It’s rare that in a summer effects movie you’d want to see more idle gabbing and fewer neon explosions, but in this case, it’s the talk that’s golden.

Leslie Jones, superbly cast as a subway attendant who is moved to join the gang, delivers a star-making turn as Patty Tolan, but the top trump here, however, is the actress Kate McKinnon as Jillian Holtzmann, the mustard-shaded science brain. She is the one combustible element here. It’s like she’s been teleported in from a seventies Robert Altman movie. Or a female Kramer, the hipster doofus from Seinfeld. Every time the camera is on her, she uses it, sometimes with a screwy line reading, others by just making an expression that looks like she’s existing in a duel reality. A lesser film might have relegated her to a single dose bit player, but here she’s allowed not only to shine, but to locate the humanity in her exceptionally (almost psychotically) deranged character.

The film neatly tees itself up for a sequel, and with tonal issues ironed out and the ability to judge what worked (the banter) and what didn’t (the effects), it’ll likely be an even more inviting prospect. It’s by no means perfect, and Feig struggles when directing anything other than intimate human comedy, but the central cast excel, and, unlike the large majority of mainstream features, it’s genuinely funny, inventive and clever. Next time, let’s hope the fans being serviced are those in love with this superior new iteration, and not the basement-dwelling bedwetters who mask their rabid misogyny as innocent geek entitlement and misplaced nostalgia.

Fingers and toes crossed that it isn’t a disaster.

Can we just make Kate McKinnon our new god now?