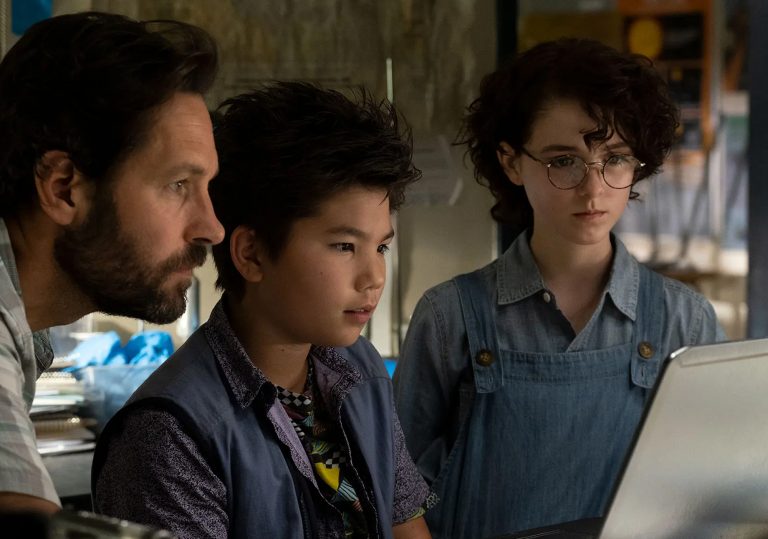 The trailer didn't do this one any favours.

The bland script and unrelenting nostalgia are headache-inducing.

Haunting, but not in the good way.

Back in January 2019, after it was announced that Jason Reitman would be trying his hand at making a Ghostbusters film, I wrote a little letter to him, speculating on what it might look like, and urging a little innovation rather than relying on lingering goodwill and nostalgia value from his father’s original iteration. If anything, I feel I may have been overly optimistic about the future of the franchise.

Upon arrival they discover the past Egon hid from them, and with assistance from kindly science teacher Chad Grooberson (Paul Rudd) and plucky local kids Podcast (Logan Kim) and Lucky (Celeste O’Connor) must embark on a dangerous mission to Save The World from a malevolent supernatural presence.

Jason Reitman has always stayed firmly away from his father’s legacy, carving his own path with a series of generally well-received indie dramas despite being dogged by the question of whether he’d ever make a Ghostbusters movie throughout his career. A desire to make a film for his father and daughter possessed him to answer the call this time around. Unfortunately his answer is a misjudged dose of nostalgia overload, laced with cringe-inducing dialogue and bizarre sex gags that seem out of place in a script centred on a group of young teens.

“Ghostbusters is one of those rare franchises, where it doesn’t belong to the filmmakers anymore,” Reitman said at a screening. “It doesn’t belong to my father. Technically it belongs to Sony, but really it belongs to all of you.” While the sentiment behind this statement is noble, it represents a problem that Hollywood finds itself experiencing time and time again; how do you mine past successes for content without merely regurgitating a series of familiar images in pursuit of box office returns? Reitman doesn’t have any answers; his sequel is packed with Ghostbusters mythology to the extent it’s difficult to see what could be gleaned from this experience that wouldn’t be improved upon by simply watching the 1984 original.

Beyond a fairly uninspired script about a generic-looking demon who wants to destroy the world for some reason, there’s a distinct lack of chemistry between the cast members, who never quite feel believable as a family unit. Their stock tropes (the rebellious teenager, the nerdy daughter) are gratingly familiar, while the usually delightful Carrie Coon is underused as their scatter-brained mother. A romance between her and Phoebe’s science teacher might be charming if it wasn’t swiftly undercut by the bizarre decision to make them have sex while possessed by ghosts as part of a barely-explained ancient ritual.

Then, of course, there are the Stay Puft Marshmallows – a mainstay of the franchise, seen throughout this film’s marketing campaign. Their appearance here is unexplained; sentient marshmallows roast each other on a barbecue as a visual gag, presumably to raise a chuckle from the parents in the audience who were kids when the original Ghostbusters came out.

Miraculously, this isn’t the most baffling moment in Ghostbusters: Afterlife, which comes in Reitman’s decision to use digitally-manipulated footage of Harold Ramis from his father’s films to tug on the heartstrings. The practice of digitally resurrecting actors for film appearances has gained prominence in recent years, raising ethical questions about screen life after death.

Reitman might have had noble intentions in including Ramis alongside old buddies Dan Ackroyd, Bill Murray and Ernie Hudson (who also reprise their roles from Ghostbusters) but what purpose does it serve, beyond conjuring an image from the past to tap into the brainwaves of sentimental adults? It feels like a cynical ploy for unearned emotional resonance, as if Reitman can’t help but use the past as a crutch.

At least Feig swung for the fences with his 2016 iteration. Reitman’s sequel is a continuation of Hollywood’s growing money-spinner: asset-stripping previous Hollywood hits in lieu of risking any potential loss on new ideas and imagination. It might sell tickets, but only because people recognise the name. Any interest in artistry is all but dead and gone in the age of the IP blockbuster.

The trailer didn't do this one any favours.

The bland script and unrelenting nostalgia are headache-inducing.

Haunting, but not in the good way.