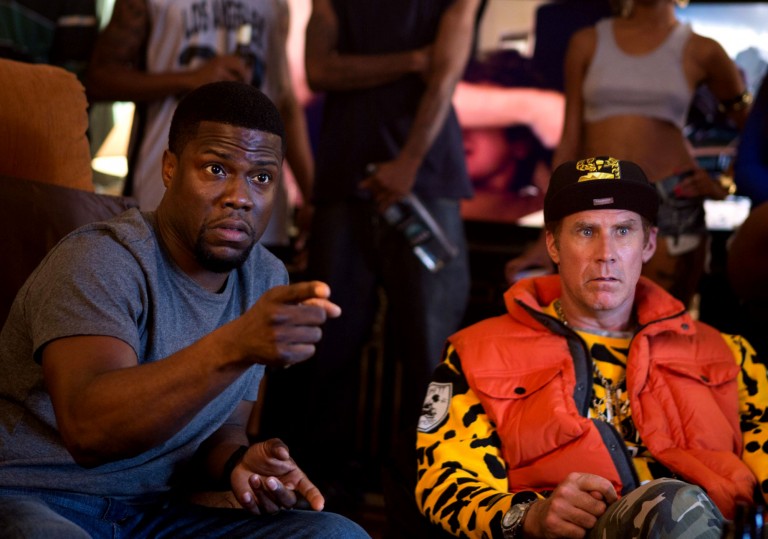 As advertised on busses.

Rote isn't the word. But, there is one incredible sequence.

A movie you're waiting to finish rather than anticipating the finale.

White-collar crime presented as gay panic slapstick is the nub of Get Hard, a lazy film that Adam McKay appears to have co-written and then passed over to one of his retinue of prank monkeys upon realising its lack of potential.

Throwing comedy heavyweight Will Ferrell into the ring with fast up-and-coming newbie, Kevin Hart, the story centres on the idea of the former being sentenced to 10 years in San Quentin maximum security prison, and the latter being recruited to help him prepare for his incarceration during a 30-day parole period. And by “prepare”, what is actually meant is taking measures to prevent (or at least alleviate) inevitable gang rape. The film espouses the notion that the best way to stop being raped is to be violent and aggressive.

Ferrell’s James King is an arrogant tycoon turned patsy whose capoeira, pastel leisure suits and generally effete manner lead Hart’s Darnell – a lowly car valet who can’t catch an even break – to convince him he needs a crash course in how to “get hard”. And not get raped. Though the film attempts to tread carefully with its racial politics, it well and truly drops the baton and then awkwardly fumbles around on the floor when it comes to questions of how its characters deal with sexuality.

Ironically, the film reaches its nadir when it attempts to fire-fight to prove that – hey! – we can mock everyone and anyone, and come up smelling of roses. A scene at a gay bar in which Darnell realises he may as well teach King how to suck dick (considering that’s all he be doing for the next 10 years) is hateful and self-satisfied, particularly in its attempts to frame the homophobic Darnell as some kind of gay dating guru.

As always with these things, there are a few chuckles along the way. One spectacular scene sees Hart emulating a three-way turf war in the prison yard by enacting three separate roles. He does so with incredible energy and ingenuity, and it’s one of those scenes where the longer it goes on, the funnier it gets. Ferrell is made to stand in the middle and jabber incoherently, unable to amply respond to Hart’s lightening moves. It’s a crying shame that the half-assed filmic matter surrounding this section is so depressingly formulaic. Seek out Warren Beatty’s genuinely dangerous Bulworth instead.

As advertised on busses.

Rote isn't the word. But, there is one incredible sequence.

A movie you're waiting to finish rather than anticipating the finale.