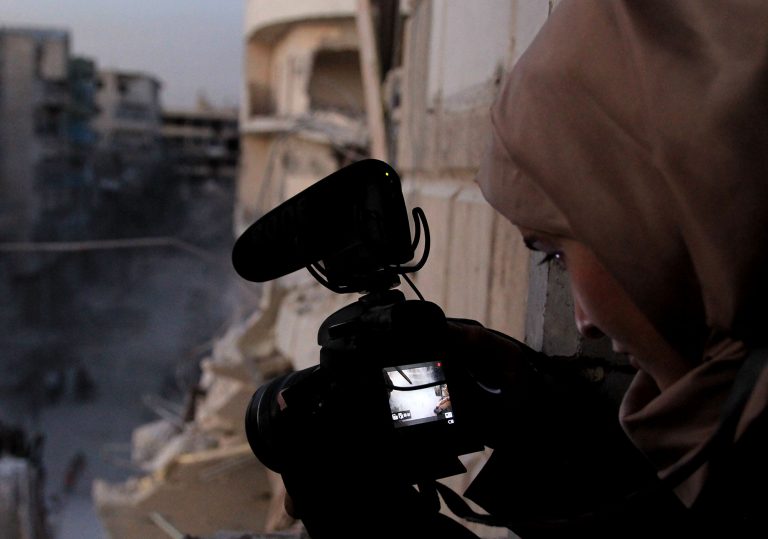 Must be seen to be believed. Waad Al-Kateab is your new hero.

There are some filmmakers who believe that the camera does not possess the capacity to amply capture the true horrors of war. The sights, sounds and smells exist beyond the comprehension of those who haven’t experienced a mortar attack, or brushed up against a weeping mother as she cradles her dead child.

Sama is the baby daughter of one-time amateur video journalist Waad Al-Kateab, and she somehow sustains a large grin as the city of Aleppo crumbles around her at the hands of Bashar al-Assad’s oppressive regime which is backed by the Russian military. Waad explains to her daughter that she must document the devastation with her digital camera for posterity, but also so she might come a little closer to explaining what she lived through – if, indeed, she lives through it.

The episodic structure mimics the randomness of the city’s military bombardment, sometimes an air strike, occasionally some troop fire, often widespread casualties and horrendous chaos. She locates occasional solace and reason in her indefatigable husband, Hamza, a doctor who somehow manages to maintain laser focus on his duties despite the ever-expanding devastation and the ever-dwindling inventory of medical supplies.

Sight unseen, the film might come across as a trite plea for global peace in the name of “the children”, and it does fit that bill in many ways. Though trite it is not, as Al-Kateab (along with co-director Edward Watts) mute any unwarranted sentimentality by focusing purely on what’s there and what’s happening, forcing the viewer to constantly ask of themselves: are you comfortable with all of this?

As the film shifts into its heartbreaking latter stages, it begins to include moments which suggest that, even when society has hit its nadir, there are fragments of transcendent magic to be found among the ruins. Essential.

Must be seen to be believed. Waad Al-Kateab is your new hero.