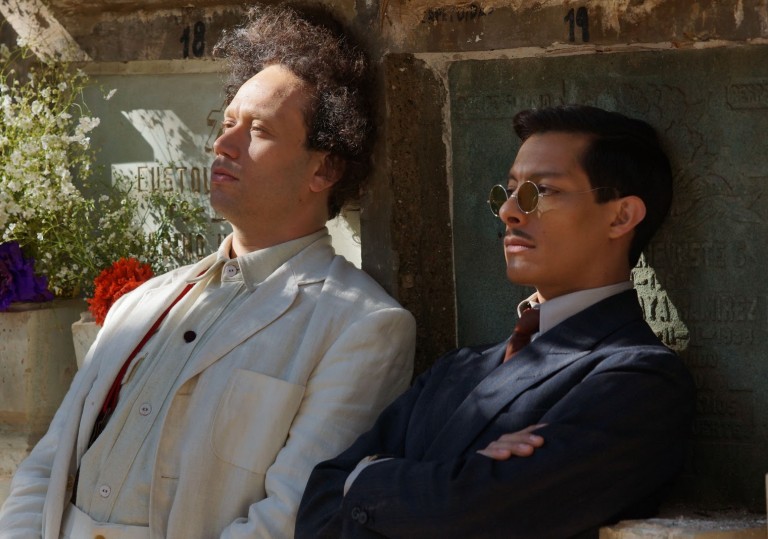 Peter Greenaway explores the Mexican dog days of the Russian maestro. The results are typically indelicate.

Okay, so we need to talk about Peter Greenaway’s fixation with full frontal male nudity. When the chance arrives to insert flapping, jutting, windmilling genitalia into the frame, he swings at it like he would some ornate, phallic piñata.

It’s been one of the key characteristics of his career, and the effort he is making to normalise depictions of the human body and return to a more classical, uninhibited way of thinking is certainly laudable in its intent. But in a film like Eisenstein in Guanajuato this mission appears to have reached critical mass, where consuming the story becomes a process of praying that he’ll choose to trade one flaccid weenie for just a small scintilla of conventional drama.

It’s like that thing where you’re trying to have a conversation with someone and they’ve got no pants on – it’s hard to maintain eye contact, let alone a train of thought. Here, the Russian pioneer film director Sergei Eisenstein (played by spirited Fin, Elmer Bäck), arrives in Mexico with the mandate of making a movie (his fascinating folly, ¡Que viva México!), but instead opts to explore his own sexual peccadillos.

Greenaway fires a mighty jet of information – both visual and aural – towards the screen, with each scene existing as a bombastic miniature set-piece and usually climaxing in some kind of would-be bawdiness. The frame is often used as a flash-card triptych, monologues duly enhanced with portraits pertaining to the copious high cultural references alongside the director’s own ribald doodles.

This may read like a damning indictment of Greenaway’s project, but the way he shoots and edits would make him the perfect choice to direct music videos. He films dialogue scenes with a camera that shimmies and pans dynamically around the room, across bodies, through spaces, injecting a false (but nevertheless compelling) sense of high urgency into the obscure proceedings.

Rooms always look like sound stages or theatre stages (never actual rooms), emphasising his apparent disdain for social realism. But this distancing effect achieves just that – it makes it tough to muster a desire to engage with the text. Greenaway’s best work manages to muddy that dividing line between the real and artificial, particularly a film like 1989’s The Cook, the Thief, His Wife & Her Lover.

The film comes across as an immaculately researched and stirringly mounted biopic which breathes new life into a tired mould. But there’s never a point where you feel like Eisenstein is anything more than a fanciful creation, the product of an artist’s mind rather than a credible creation. Perhaps complaining that the film lacks for humanity is missing the point, but if you happen to like your cinema retooled as a scattershot history lesson intoned by a randy academic, then you could do a lot worse.