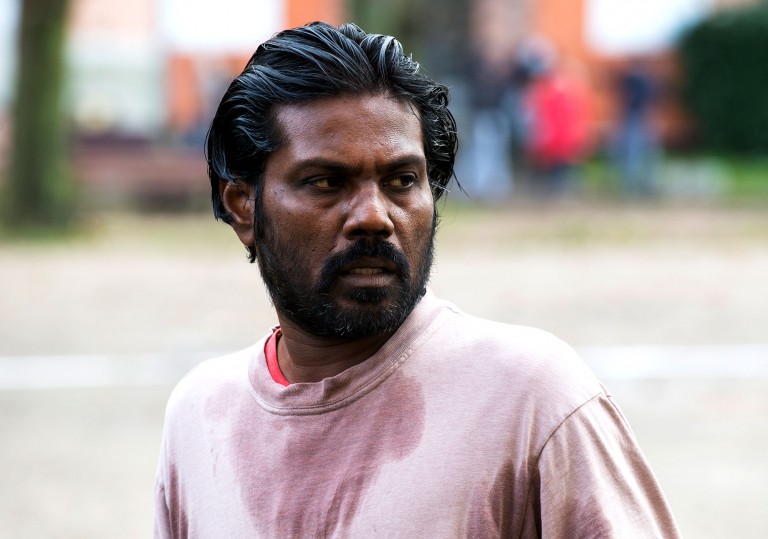 Jacques Audiard follows up Rust and Bone with something a little different.

And it’s great, until it’s not great.

Reasons to believe his next one could be great.

There’s an amazing trick shot early on in Jacques Audiard’s surprise Palme d’Or winner Dheepan where our eponymous hero (Jesuthasan Antonythasan), having managed to flee from Sri Lanka (where he was engaged as a foot soldier in the Tamil Tigers) to France, begins a new life selling novelty trinkets from a suitcase.

All we see is flashing blue and red lights on a blanket of deep black, and it looks for a moment as if an aeroplane is landing at night. In terms of continuity, it would seem a wholly logical image. But it’s actually the LEDs from plastic rabbit ears worn by a trio of vendors who go on to hector diners in a restaurant. This brand of high style is an Audiard trademark, but this new film mutes his kneejerk recourse to visual flash to make way for a more serious and timely exploration of the immigrant experience.

Dheepan is, for most of its runtime, a satisfyingly even-handed and non-judgmental story of culture shock. It’s not an overtly political film, though Audiard makes it easy to place his characters and their actions against the backdrop of contemporary events. For the most part, it sets its stall as being remarkably pro-immigration, offering reason after reason why healthy Western economies should do their utmost to help people from politically volatile locales. But is offering aid enough? What’s the point in amassing funds when there’s no-one to help with that daunting task of leaping across the cultural and political chasm? Self-empowerment is one thing, but are we really aware of all the obstacles that lay in the way of those escaping violence and persecution?

Alongside his fake wife Illayaal (Kalieaswari Srinivasan) and fake daughter Yalini (Claudine Vinasithamby), hastily assembled to fit the profiles of a stack of passports whose owners have no further use for them (i.e. their corpses are likely fuel for a large bonfire), the ill-matched trio are placed in a grubby suburban housing tenement which plays host to regular bouts of gang-related gunplay.

At one point, a line is painted between two tenements as the territorial pissings of goons with too much spare time begin to stink up the place. Yet they all get on with the tasks at hand, “husband” taking on the role of caretaker, “mother” the role of social carer and “daughter” as inquisitive schoolgirl. There’s a bracing honesty to the way Audiard presents his characters as earning the trust of the local community as they work tirelessly to improve lives; more interesting, though, is the strained and confusing relationships between the two phoney lovers.

A nervous tension arises around how long Audiard can keep all this good work up, how long he’s going to be able to rein in his grandiose tendencies. Yet, as prior experience might have hinted, things go majorly downhill in its botched final act. Minor key observation gives way to hulking plot-twists and blood-sprayed shoot-outs, which gives us a chance to see Dheepan’s old self emerge once more, torturing, maiming and killing as he did when part of a rebel militia. This doesn’t merely bring a cumbersome tonal shift, but undoes a lot of the highly nuanced and enlightened political discourse from earlier on. Almost.

Jacques Audiard follows up Rust and Bone with something a little different.

And it’s great, until it’s not great.

Reasons to believe his next one could be great.