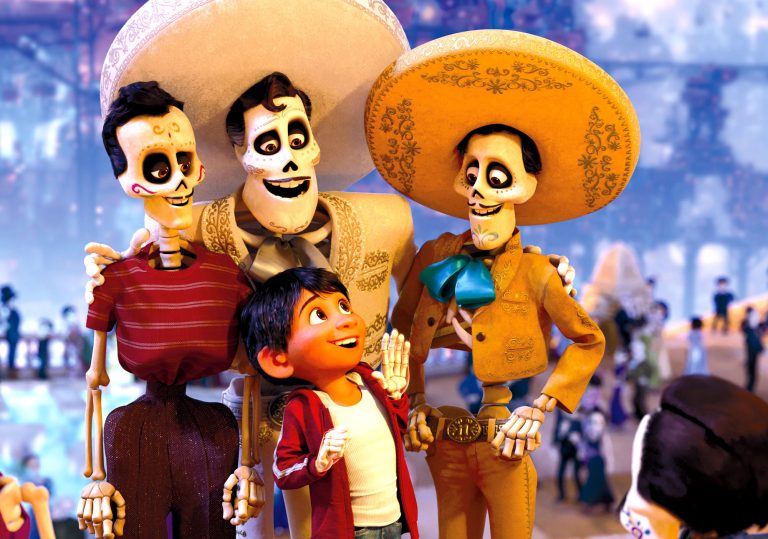 Step aside all the animated crap made to fill up Half Term. Pixar are back in town.

It’s almost lovely – a shaggy dog ride into the afterlife that never kicks into top gear.

Not top-tier Pixar. But decent enough.

Having already dealt with such existentially weighty topics as chronic depression (Inside Out), the nature of artificial intelligence (WALL-E) and the perils of physical decay (Up), the crazy kids over at Pixar have landed on their latest family-friendly discussion point: impending mortality. With this being a digitally-animated adventure epic, the whole concept of merging with the infinite is repackaged in a way that’s cheerful, amusing and super fun for kids of all ages.

Young scamp Miguel (Anthony Gonzalez) shines shoes by day and worships at his secret hand-built shrine to peacocking troubadour Erenesto de la Cruz (Benjamin Bratt) at night. By strange quirk, his family abide by a strict no music policy, down to a romantic altercation from a few generations past. For reasons that are not altogether clear, Miguel is transported to the Land of the Dead on – coincidentally – the annual Day of the Dead, where he must learn a few lessons about pride and the importance of memory before he’s able to return back to the nest.

The team behind the project (as Pixar’s film are rarely the product of a single mind) have parlayed years of Mexican tradition and superstition into a light-hearted fantasy about how life is extended for as long as people are able to keep our spirit alive in their hearts and minds. Photography – and, by extension, cinema – are the tools used to keep that flame burning.

This time around, the intellectual underpinning isn’t quite served by a story which is too often hampered by lazy contrivances and lots of lucky escapes. The design is as pristine as we’ve come to expect from this outfit, although at times feels like it’s been pushed a little far. Subtle patterns are etched onto the skeleton faces of the denizens of the Land of the Dead, but the cute spirit animals are painted in garish neon and their purpose within the plot is largely functional.

There is a barking mad mutt named Dante, yet any deeper literary allusions begin and end there. But if Pixar have a certain special touch to their work, it’s the tactile quality they achieve through the rendering of skin and the textures they build up on every surface. Even though the film is very much a cartoon in the Disney tradition, its makers employ every trick in the book to make you question whether you’re watching an organic object implanted within a digital backdrop.

It’s a weird one, though… On one side, you have to be thrilled by the fact that there are filmmakers out there willing to nudge the boundaries of family-oriented animated fare. Yet on the other, it’s appears increasingly clear that Pixar are becoming a victim of their own success. The issue isn’t down to what the films look or feel like – it’s more that they’re all starting to feel awfully similar. With a few lone exceptions, the very idea of a sequel appears to directly contravene Pixar’s constant push for originality.

Coco isn’t a sequel, but its eccentric quest narrative in which a young person learns a valuable life lesson is starting to feel careworn and unsurprising. This film positively pops with ideas, and there’s more value in a single frame of this than in an entire air hanger’s worth of Emoji Movies. And yet, it’s not quite up there with the golden greats of this vaunted animation behemoth.

Step aside all the animated crap made to fill up Half Term. Pixar are back in town.

It’s almost lovely – a shaggy dog ride into the afterlife that never kicks into top gear.

Not top-tier Pixar. But decent enough.