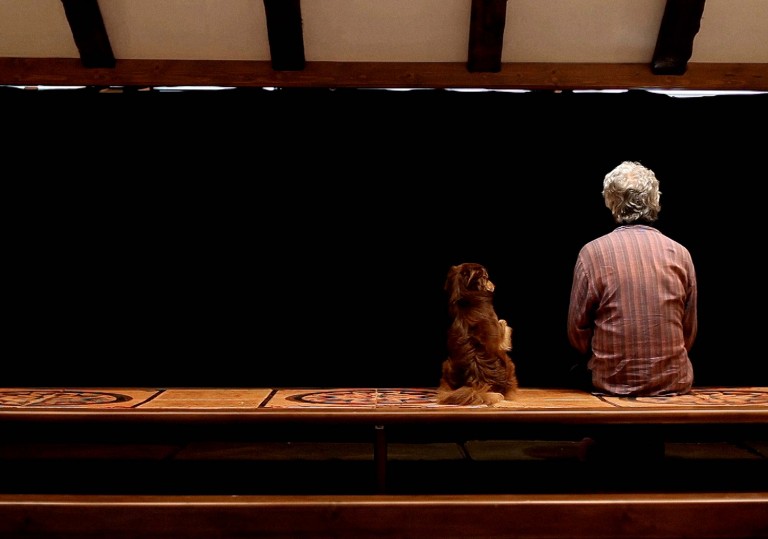 One of Iran’s foremost directors.

Derails itself on purpose.

A powerful meditation on creativity.

It’s ironic that Iranian director Jafar Panahi went to the Caspian shoreline to make Closed Curtain. The status of the resource rich sea is still unresolved, due to disagreements over delimitation between Iran and the other four nations that share its coastline. And yet oil is drilled by all five countries. Panahi’s status mirrors that of the Sea. He’s been prohibited from making films by the Iranian government since 2010, but does so anyway.

This is his second feature since 2011’s This Is Not a Film. Until his situation is resolved, he looks inwards for material, but Closed Curtain, made in 2013, represents a definite end to the ideas he can generate in isolation from the world. A writer (Kambuzia Partovi, who co-directed the film) comes to a house on the seashore with his dog, who he hides in a bag. Dogs are all-but-prohibited as pets in Iran, and this small act of defiance means that he has to draw heavy curtains all around the house.

His peace is disturbed by a couple that claim to be brother and sister, and that they are on the run from the authorities. The brother leaves, and the writer is left alone with the sister, who is implied to be suicidal. The two butt heads as the writer wonders if she is a spy or something more sinister.

This is where things get tricky, as the film veers from fiction into something more surreal. Panahi is saying that art cannot exist in a vacuum, and that it needs to be nourished through honest social and intellectual interaction. Everything in the second part becomes a critique on the deficiencies of the first part. We see what it is like to be kneecapped at your prime, and Panahi suggests that the only thing you can do is to examine the wound and maybe pick at it. “I know times are really tough, but it’ll get better,” says Panahi’s friend. For his sake, and our benefit, we hope so too.

One of Iran’s foremost directors.

Derails itself on purpose.

A powerful meditation on creativity.