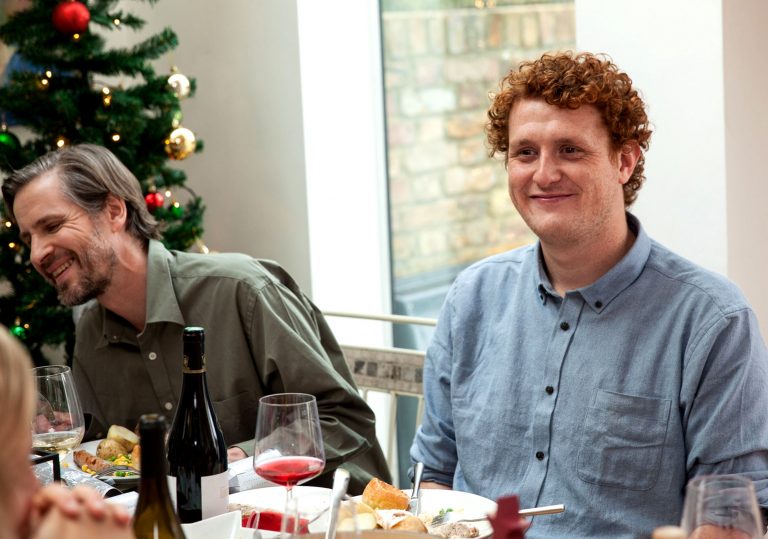 Is this a new British comedy talent in the making?

Not quite. This overly-familiar tragic character study never quite makes a connection.

A solid debut effort. No doubt writer-director-star Harry Michell will be back for more soon.

This micro budgeted London-set comedy about aspiring actors plays too many of the same old notes.

Springing from a deep well of humiliation-based observational comedy largely emanating from the small screen, Harry Michell’s Chubby Funny is a feature debut which struggles to transcend its assorted influences. Michell himself essays the tousle-haired and generously proportioned aspirant actor, Oscar, who has given himself one year to snag a decent role and kick start his career. Holed up in a pokey London flat with his slightly more street smart and conventionally attractive chum, Charlie (Augustus Prew), he is quickly overwhelmed by a quasi-bohemian lifestyle which requires far more organisational nous and maturity than he was planning for or possesses.

The film locks into a comfortable gear early on and then maintains cruise control. Michell struggles to bring more to Oscar than the conventional traits of the tragic idiot in a performance which veers wildly between forced hepcat cool and juvenile self-sabotage. The unnatural manner in which he delivers dialogue, which involves lots of repetition and spoken inner monologue, often flattens any potential humour. It’s a brash comic mode which only highlights the essential superficiality of the script, and becomes increasingly irritating across feature length.

Its episodic narrative, too, offers little that feels fresh or exciting, with Oscar lurching towards degradation or confusion in a procession of ugly urban settings. Chubby Funny aspires to a rough-hewn realism, which it achieves briefly in an early party scene, but quickly settles in to building up contrived situations which almost translate as fantasy. You can see the actors lightly riffing around a boilerplate central conceit which never quite hits home.

A sequence in which Oscar films an advertisement for a chocolate bar dressed as a human-squirrel hybrid swipes for low hanging fruit, as do the scenes in which Oscar visits an off licence to argue with its snap-talking immigrant proprietor. There are also unnecessary, cute affectations which instantly disconnect you further from the perceived reality: Oscar writes on a typewriter (even though he owns a laptop); he falls into a his-’n’-hers bath with an old flame.

Sexuality plays a key part in determining the relationship between Oscar and Charlie, but even on this level, the film is at best indistinct and at worst confused. Oscar is a supposedly progressive heterosexual who’s willing to spoon with Charlie in a platonic, matey fashion, but balks when Charlie later admits to being gay. It’s difficult to discern whether Michell is tapping into a latent strain of homophobia within Oscar, or suggesting that Oscar is himself gay (or at least bi-sexual), or it’s all just part of a bigger plot construction to make Oscar’s eventual fall even more spectacular. Whatever the outcome, there’s no interesting broader point being made about the connection between fluid sexuality and interpersonal relationships.

Add to the fact that the film is badly lit and flatly shot (London has seldom looked this drably anonymous on screen – maybe that’s intentional?) and it’s not looking good. The sense here is that Michell has attempted to tell a story which cleaves tightly to indie convention rather than take advantage of the creative freedom afforded by a micro budget. Which is a shame as there’s clearly a feel for performance and character-building on show, added to Mitchell’s own on-screen bravado and willingness to self-abase.

It’s the young actor Isabella Laughland who brings some respite as Oscar’s scatty, wannabe journo paramour, Sophie. She’s the only actor in the film who doesn’t look like she’s straining for some kind of deeper pathos. It’s an appealing and un-selfconscious performance, and you can’t help but wish that she’d been nudged centre stage for this one. Her vim and energy make for a sprightly contrast to Oscar’s whingebag schtick which only serves to cement his failure as an inevitability from the first scene onwards.

Is this a new British comedy talent in the making?

Not quite. This overly-familiar tragic character study never quite makes a connection.

A solid debut effort. No doubt writer-director-star Harry Michell will be back for more soon.