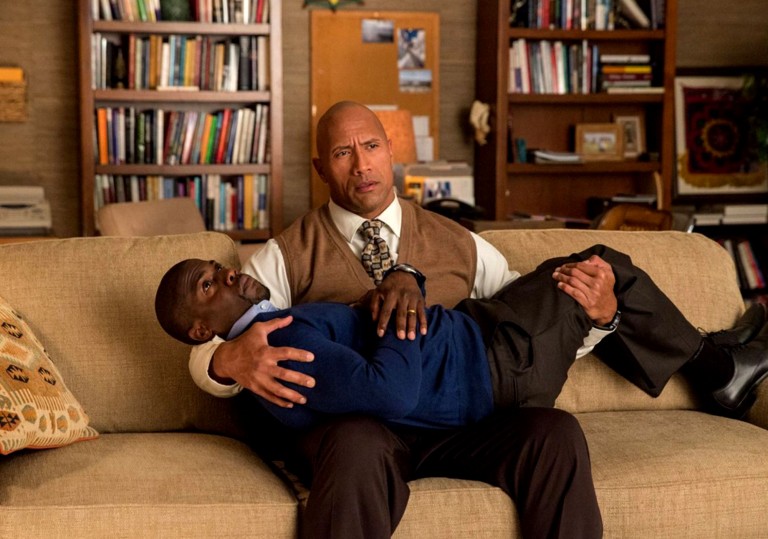 Grosse Pointe Blank starring The Rock? Count us in!

A silly and endearing buddy film with a waning plot.

Does an act of kindness by a fellow human being leave a lasting impression on a victim of bullying? In Rawson Marshall Thurber’s buddy comedy, scripted by Ike Barinholtz and David Stassen, the answer appears to be yes. Films about the high school experience are often wrought with sentimentality, angst and simple solutions which is something the screenwriters are well aware of and play with. They reference John Hughes’ Sixteen Candles throughout and paint something of a bromance between the two protagonists with the geek and the jock not only learning to love themselves but also one another 20 years after graduating.

With a high school reunion looming the popular kid Calvin Joyner (Kevin Hart) who is now an accountant starts to question his position in life. He’s married to successful businesswoman Maggie (Danielle Nicolet) and earns a decent salary, but he can’t help feeling there’s something missing in his life. When Maggie suggests counselling he agrees only to get out of their first session by arranging a meeting with the mysterious Bob Stone (Dwayne Johnson), who according to his Facebook profile loves cinnamon pancakes and unicorns.

Johnson turns in an impressive chameleonic performance as a CIA agent switching between many guises including action man, goofy best friend and relationship therapist with charming elegance. At times Central Intelligence has the manic energy of a Richard Pryor/Gene Wilder film with Hart exhibiting some fine comic timing. It’s at its best when the two stars are bouncing snappy one-liners off one another but becomes less engaging the longer it goes on, as the film madly leaps from one random set piece to the next. Though the action has oomph its appeal rapidly dissipates.

Amy Ryan appears as a straight talking CIA operative on the hunt for Stone who she claims has gone rogue. It’s a poised performance comparable to Dan Aykroyd’s turn in Grosse Pointe Blank as she negotiates her terms and conditions with the jittery Joyner. Jason Bateman also turns up as a shrewd businessman akin to Bill Murray’s ruthless TV executive in Scrooged.

Despite its ’80s high school allusions, Central Intelligence frolics happily in the nostalgia of the 1990s, reminiscing about Budweiser’s “Wassup” adverts and featuring a soundtrack that opens with En Vogue’s ‘My Lovin’ and plays Blur’s ‘Song 2’ along to a vigorous action sequence which sees the pair crash out of a skyscraper in a mail cart. Though not quite as narratively sharp, it shares a similarly enlightened sense of humour with the 21 Jump Street films.

Grosse Pointe Blank starring The Rock? Count us in!

A silly and endearing buddy film with a waning plot.