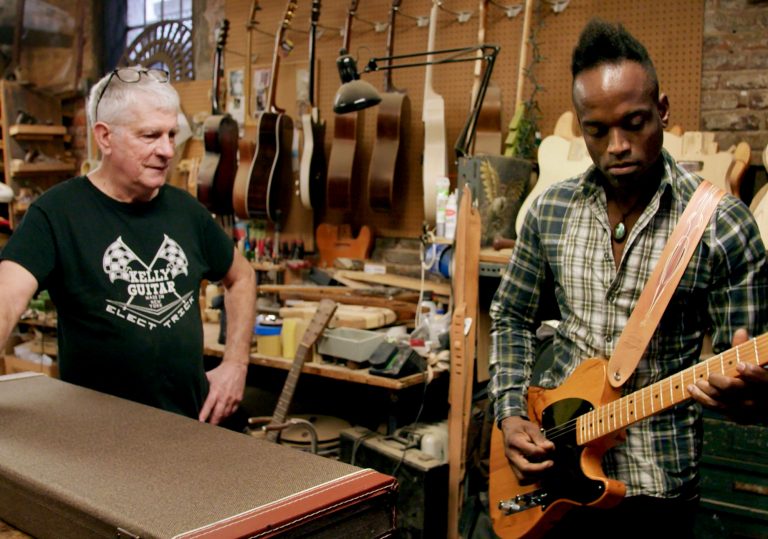 How much is there to learn about running a guitar shop?

Quite a bit, it turns out.

Director Ron Mann takes us on an intimate tour of a legendary Greenwich Village music shop.

Carmine Street Guitars is a musical instrument outlet that has stood on the same site in New York’s Greenwich Village since 1990. Per the name emblazoned on its front window, it’s a simple, zero-fuss establishment that has remained virtually unchanged over the decades, making it a living reminder of both the neighbourhood’s bohemian roots and its rapid gentrification.

Entering the shop is like stepping back in time, a feeling that is amplified by owner Rick Kelly’s USP: he makes bespoke guitars from old lumber reclaimed from derelict buildings dating back to the 19th century.

Watching Kelly hand craft his famous ‘Bowery Guitars’ from “the bones of old New York City”, as he puts it, is to observe a master artisan in his element. Anyone can play guitar, but very few people can do what Kelly does, as he transforms rotting hunks of wood into genuine works of art.

Director Ron Mann is evidently enamoured with his subject – although over the course of the five days he spends filming at the shop, very little is actually revealed about Kelly himself. Perhaps it’s fitting that his hermetic existence should go largely uninterrupted by the presence of an (albeit small) film crew. Or maybe Kelly just prefers to let his custom creations do the talking.

With Kelly taking a back seat for the most part, Mann acquaints us with the handful of employees who keep the business ticking over (at one point Kelly’s talented understudy, Cindy, tries to convince him to set up an Instagram account, to no avail) as well as the various celebrity patrons who come in to get their axes restrung and test out Kelly’s latest creations.

It’s a treat to see the likes of Jim Jarmusch, the Roots’ Kirk Douglas and Wilco’s Nels Cline swing by for a natter and an impromptu jam. To them, it’s Kelly who is the real rock star.

How much is there to learn about running a guitar shop?

Quite a bit, it turns out.