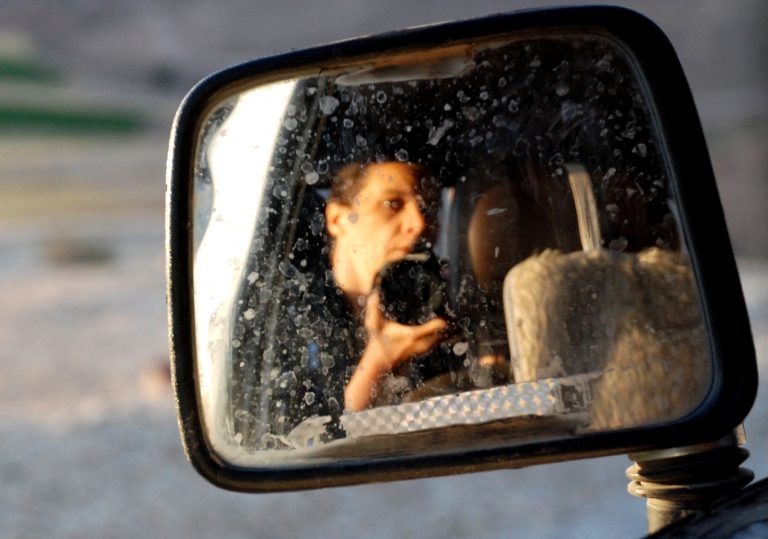 Confidently made, with a roaming spirit that makes it one of the most engaging films of the year.

We are all richer for Johnson’s atypical and unquenchable curiosity.

One of the keys to unlocking Kirsten Johnson’s incomparable new docu-memoir Cameraperson is to consider that beautifully concise title. Cameraperson: two words that have been bound together to create a single and singular being. We seldom see Johnson, a veteran documentary cinematographer, throughout the duration of the film, aside from the occasionally outstretched arm or focus-adjusting hand. But to watch Cameraperson is to understand that the camera is by now an extra appendage for Johnson, who culled together footage from the many documentaries she has shot to craft a quietly commanding self-portrait of a filmmaker whose life and work have long been indistinguishable.

Johnson’s film is a globetrotting and time-hopping journey through a 25-year career that taken her from a heavily protected detention site for Al-Qaeda prisoners in San’a, Yemen, to an open division boxing tournament in Brooklyn, where one scrappy competitor stonily prepares for a fight then throws an unnerving temper tantrum when he loses, a spectacle that Johnson captures in all of its fiery and extended petulancy. Between this, Johnson zigzags from a hectic maternity ward in Kano, Nigeria, where a heroically pragmatic midwife desperately attempts to revive a newborn baby after a difficult delivery, to a district attorney’s office in Jasper, Texas, where some weary prosecutors prepare their case against the infamous killers of James Byrd, Jr, to an outdoor police post in Kabul, Afghanistan, where a grinning officer leaves Johnson his freshly-cut watermelon before speeding away to an assignment.

Each destination offers a captivating movie unto itself and we never stay too long in any one place. At times, the whirlwind speed with which Johnson’s remarkable editor Nels Bangerter transports us from location to location can be purposely disorienting, even dizzyingly so. There’s also an unpolished rawness to Johnson’s shot compositions that, combined with Bangerter’s elliptical montage, makes for an engaging scrapbook of fragmentary experiences, but, quite possibly, little else.

We quickly learn, however, that mere scrapbooking is the bare minimum of Johnson’s objective. Early on, she shows us a ravishing, static weather shot of an open blue-grey sky in in Nodaway County, Missouri, lingering on this natural vista until it is suddenly streaked with imposing thunder. Johnson lets out a single “whoa.” Then, out of nowhere, she sneezes – twice – as the camera wobbles with each burst. It’s a disarming moment of easy humour but it bespeaks a more intriguing motivation driving the film. In many of Cameraperson’s shots, Johnson’s camera bobs, shifts, and shakes. We frequently catch her in the processes of steadying, focusing, and repositioning. These moments might seem like a distraction to some but their incorporation actually produces the much deeper effect of demystifying the documentary process, capturing the magic of shooting while slyly acknowledging the human being who has conjured it.

Johnson is far from a silent witness to the scenes and speakers she is capturing and one of the many virtues of her film is getting a first-hand view of both the careful assembly that frequently goes into a shot and the inevitable spontaneity that arises regardless of intent or preparation. In one scene, shot in an abortion clinic during the making of Dawn Porter’s Trapped in Huntsville, Alabama, Porter talks with a young single mother about to undergo the procedure after her second unintended pregnancy. When the girl begins to cry, both Porter and Johnson chime in with consolation, reassuring her that she is doing the right thing. Johnson’s filming of this testimony lingers on the speaker’s lap and hands, hiding her face and preserving her anonymity while implying a great deal through gesture and stillness. Later, this framing will take on added poignancy as Johnson shoots an interview with a late-age Bosnian rape survivor in exactly the same fashion.

Cameraperson brims with the open, trusting, and cooperative spirit of a true communal creation, aided not only by past collaborators like Porter, Michael Moore, and Laura Poitras, whose included films Johnson has given a sturdy look and feel, but by the myriad individuals who appear before Johnson’s searching camera. A determined farmer in the midst of herding his sheep is filmed with the same wonder as the French philosopher Jacques Derrida as he walks the streets of Soho and theorises with a group of colleagues. Johnson shoots two Darfurian women as they chop down trees and banter about being chased out of their homes by Arab forces with the same contemplative interest she shows a male chorus singing the Penn State college anthem before the school’s first football game following the child sex abuse scandal that forever tarnished its legacy.

We become just as attached to a Muslim family that has recently returned to the wildflower-covered hills of their home in Foča, Bosnia after years of ethnic cleansing as we do to Johnson’s own family, including her elderly mother, battling Alzheimers at home in her Wyoming ranch but still lucid enough to impersonate her daughter’s early facial expressions. It is a testament to Johnson’s transformative filmmaking that both visits feel equally autobiographical. From scene to scene, Johnson captures that rare but transcendent moment that transpires in the physical space between filmmaker and subject when two lives briefly become one. Sometimes, it’s the spaces themselves that tell the story, as in a somber and gorgeously-composed mid-film montage that transports us to various sites of massacre, from Hotel Africa to Tahrir Square to Wounded Knee.

Unlike anything else you are likely to see this year, Cameraperson is radically unlocked from traditional movie demands, devising its own cinematic grammar to achieve an uncommonly eloquent and extraordinarily soulful filmmaking document that fully embeds us into Johnson’s gaze and rewards our own with each passing scene. It encompasses every imaginable slice of life, from heartbreak to exuberance to sheer inexplicability. The film may begin as an unusual glimpse into a prolific cinematographer’s utterly distinctive way of life, but by its conclusion, Johnson has imparted something far more elusive yet no less profound: a new and exhilarating way of seeing the world.

Confidently made, with a roaming spirit that makes it one of the most engaging films of the year.

We are all richer for Johnson’s atypical and unquenchable curiosity.