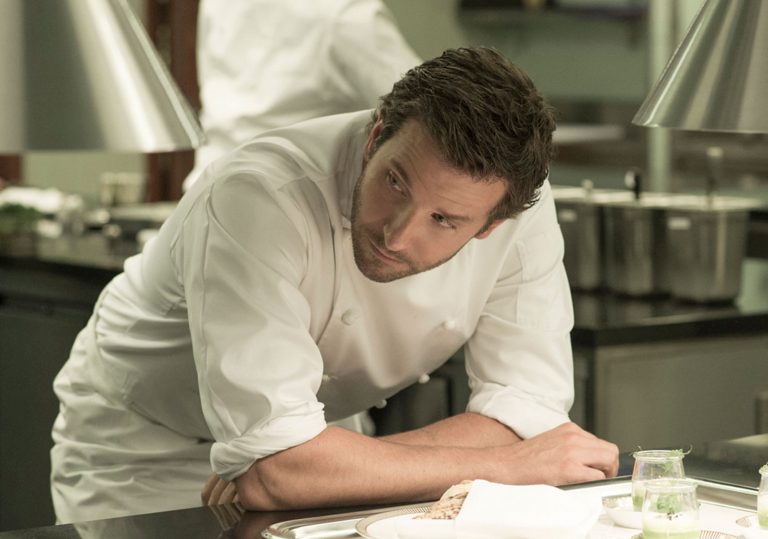 “It’s a small film and we didn’t spend a ton of money on it, but we were hoping for more.” The Weinstein Company distancing themselves from Burnt.

Retrospective thought only fries the brain.

“When I list my regrets, you’re one of them. I say: ‘Simone, you’re a lesbian, why did you sleep with Adam Jones?’”

So says an Evening Standard restaurant critic played by Uma Thurman in the most ludicrously disposable of roles. She exists to tell us that alpha chef, Adam Jones (Bradley Cooper) is so potent as a sexual being that he can swing not just lesbians, but lesbians that are paid for their critical faculties. Having relaid this point, Uma Thurman is ushered off, and is only seen once again, very briefly enjoying Adam’s turbot.

You might reasonably assume that Simone’s line of dialogue is a highlight/lowlight, but it accurately conveys the pitch of the screenplay for the whole 100 minutes of John Wells’ absurd film. We meet Adam as he is finishing self-imposed penance of shucking one million oysters. The crime? Mysterious misdemeanours in Paris three years ago. Adam reminisces about working in Jean-Luc’s kitchen with a witty remorse that would pass as hard-boiled in a noir and overboiled everywhere else: “I was good… Sometimes I was even as good as I thought I was.”

He saunters out of the job at that exact total and takes a train to London, sporting a rock star ensemble: jeans, jacket, shades. Why’s he come to London? Well, he’s worn out his welcome on the Parisian culinary scene and is on a mission to get his third Michelin star in a new European capital. All characters communicate in exposition and all exposition is in service of mythologising one of the following aspects of Adam Jones: his crazy past in Paris, his earth-shattering impact on everyone he has ever met, his unparalleled brilliance as a chef, his now renounced addictions (snorting, sniffing, injecting, drinking, smoking, licking yellow toads and women).

Bradley Cooper is one of the most disarming actors in the business. The secret premise of Burnt might as well be ‘how much bullshit can we saddle his character with and still have audiences rooting for him?’ Like some bizarre fraternity initiation that Cooper gamely commits to, Burnt presents a lead man whose supposed genius in the kitchen gives him a free pass to communicate almost explosively in foul-mouthed tirades. (Cooper based his characterisation around a combo of Marcus Wareing, Gordon Ramsey, and Marco Pierre White.)

The writing is laughable (But Steven Knight, you wrote Locke!), the story predictable, the use of foodie settings ostentatious and all supporting characters devoid of agency. Daniel Brühl as smitten maître d’ Tony and Sienna Miller as feisty sous chef, Helene are there to enable Adam’s journey from psychotic control freak to sensitive human being. It occurred to no one to substantiate their love and loyalty with personal depth. In the story as in the kitchen, the only appetite that matters is Adam’s.

Anyone who makes an informed decision to watch Burnt might want to bring a bingo-card of dramatic cliches to tick off during the runtime. To whit: a chef irately throwing crockery, big-dog rivalry, not to mention inside industry burns (“You’re serving seared tuna? What happened to your self-respect?”). The full dish could never be described as balanced or tasty but its bizarre flavour – to quote a newspaper headline within the film – shocks and delights.

“It’s a small film and we didn’t spend a ton of money on it, but we were hoping for more.” The Weinstein Company distancing themselves from Burnt.

Retrospective thought only fries the brain.