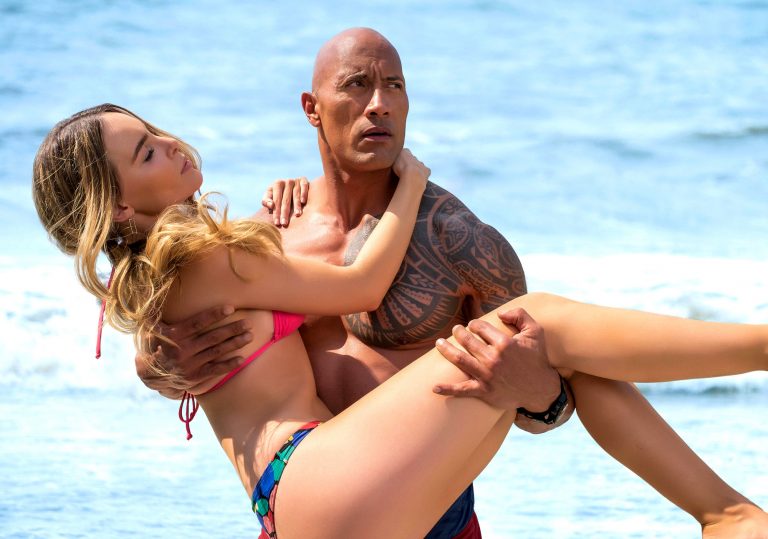 Please not another ’90s TV show reboot – have we learned nothing from CHIPS?

Some decent gags, but the film quickly falls to pieces despite Johnson’s best efforts.

Don’t expect a 21 Jump Street-style series off the back of this.

Let’s face it, people tuned in to Baywatch for over a decade because it sold a fantasy. It was a poorly scripted (and relatively sexist) version of the American Dream: white beaches, sandy bums and Pamela Anderson running around in super slow motion. As this high-profile reboot splashes onto the big screen, it’s a shame that director Seth Gordon has failed to update the fantasy – Baywatch still relies too heavily on a gratuitous, beachporn aesthetic that just doesn’t wash in 2017.

Dwayne Johnson is lifeguard lieutenant Mitch Buchannon, played by David Hasselhoff in the original series. With the reputation of Buchannon’s lifeguard team in desperate need of a PR boost, Zac Efron swoops in to save the day as would-be Olympic swimmer and full-time bad boy Matt Brody.

The film’s first half comprises Buchannon routinely ribbing Brody in an attempt to teach him how to be a team player. And it’s mostly charming; Johnson and Efron are a charismatic pairing and the former delivers even more outrageous one-liners (“I’m the ocean, bitch!”) than in the Fast and Furious franchise. It’s a lot of fun – until it isn’t.

The second half sees Buchannon and Brody go undercover to expose a drug operation masterminded by Priyanka Chopra’s knock-off Bond villain, Victoria Leeds. Yet this sharp narrative turn feels so unnecessary and far-fetched that it borders on farce. At one point we see Efron in drag for no reason at all, while the film’s R-rating will surely alienate anyone young enough to sit comfortably through this kind of mildly offensive slapstick buffoonery.

The women of Baywatch are given very few lines, and when they are, their jokes are basic and crude. “You’re fucking crazy,” Brody screams at Leeds during the film’s final action sequence. “If I were a man, you’d call me driven,” she smirks back. It’s a strange moment that hints at a level of self-awareness this film never achieves. Elsewhere Ilfenesh Hadera’s Stephanie, Buchannon’s beach-savvy right-hand lady, threatens to give us a character to grab hold of, but is ultimately underused.

Ladies aside, Johnson possesses the wit and comic timing to carry most of the weight of this shambolic film, but he doesn’t quite manage to keep it afloat singlehandedly. Indeed, when the film abandons him for a large chunk of its runtime, the jokes aren’t half as funny. Some gags do hit their mark – such as Johnson mocking Efron for his ‘Baby Gap’ look – but on the whole Baywatch wastes a hot cast on a lukewarm premise.

Please not another ’90s TV show reboot – have we learned nothing from CHIPS?

Some decent gags, but the film quickly falls to pieces despite Johnson’s best efforts.

Don’t expect a 21 Jump Street-style series off the back of this.