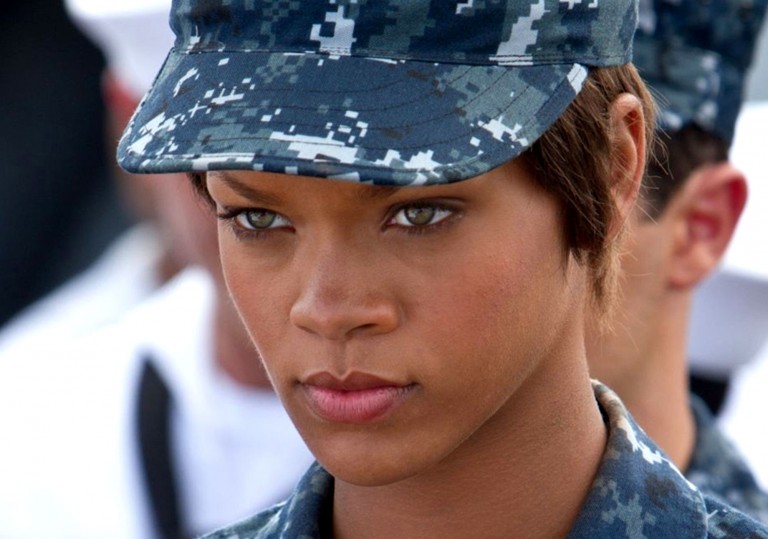 If you had big hope for Battleship, then frankly you’re an idiot.

You wouldn’t ever need to go there again. But maybe there’s more to it than meets the eye?

Easy targets abound in Peter Berg’s floating hunk of honking mature cheddar, Battleship. These range from the figurative to the literal. There’s the pungent air of jingoistic military muscle flexing, a script that reads like the result of a bet to see just how banal its writers would dare to take it and the ear-drum bothering sound assaults that resemble nothing less than Lou Reed’s ‘Metal Machine Music’. Played backwards.

And of course, with it being ‘adapted’ from the popular Hasbro strategy game with which it shares its no-nonsense title, there’s a small fleet of hostile, flea-like extraterrestrial gunships which our plucky, clean-cut defenders of the peace get to take pot shots at. The story is B-movie simple. Aliens arrive in spaceships. There are Naval military exercises occurring off the coast of Hawaii. The Navy need to blow the aliens to pieces before they contact their home planet for reinforcements. Fin. One of the advantages of this is that there’s very little exposition required, allowing the chronic one-liners room to breathe.

Originally, the aliens were going to turn out to be good guys who were searching for fuel, though that idea seems to have been cut at the eleventh hour and explains why these purportedly evil aliens refuse to actually kill any humans. Why these intergalactic spaceships which have flown lightyears to reach Earth are suddenly waterbound is less easy to comprehend.

So to put it lightly, Battleship has more rough edges than a sandpaper Rubik’s Cube, and maybe we’re giving it more credit than it’s due, but it’s also at times so wilfully – surreally! – distasteful, unhinged and bombastic that you can’t help but suspect that director Peter Berg contracted a case of the Verhoevens while making it.

The sweeping, eroticised shots of military hardware – culminating in a ridiculously over-the-top profile of every battleship in the film – and Taylor Kitsch’s charming, belligerent tough guy, Alex Hopper, can’t help but evoke Starship Troopers and give the faint impression that Berg may be lightly mocking his subjects.

There’s even a whimsical sub-plot involving a Naval officer with two prosthetic legs whose trainer (Alex’s girlfriend, played by curvy non-actor, Brooklyn Decker) takes him hiking on the very peak that our alien visitors are attempting to take. Yes, even if you have lost your legs, you still have the potential to duff up space aliens.

All this is a very tough pill to swallow, especially considering Berg’s reprehensible 2007 film, The Kingdom, with its near-the-knuckle diatribe on American-style imperialist gunishment. Still, whatever your angle, this is superior to one of Michael Bay’s soul-liquidising stroboscopic hate arias (the Transformers films) purely down to the fact that there’s at least a crude simplicity to its set-up and it’s always easy to delineate good and evil.

You suspect that, unlike Transformers, the narrative schema lent to Battleship by its board game antecedent actually helps maintain a modicum of coherence. The scene in which the board game is literally replicated on screen is arguable the best in the film. It’s hardly Polanski, but there’s a decent amount of tension wrought from the way it’s devised and edited. For many (non-male) viewers, the draw of Battleship will be the debut screen performance of electropop goddess, Rihanna. Thankfully, she’s not really given enough rope with which to hang herself, her role reduced to standing in the background with a big gun and tats, some misc ass kicking and the occasional mumbled quip.

Like most of the side characters, they’re in the mix purely for padding and relief. None of them have stories or issues that need resolving. They’re merely there to flank Kitsch in case he needs someone to bounce off of. So yes, Battleship virtually begs you despise it, every frame haplessly offering more grist for your critical mill. But maybe there is a satirical undertow to it all, a self-awareness of its own world-beating stupidity. In fact, there has to be. There’s no way this film was intended to be taken at face value. Surely?

If you had big hope for Battleship, then frankly you’re an idiot.

You wouldn’t ever need to go there again. But maybe there’s more to it than meets the eye? 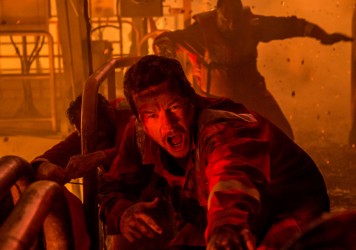 Mark Wahlberg heads up an impressive cast in Peter Berg’s dramatisation of the BP oil spill.