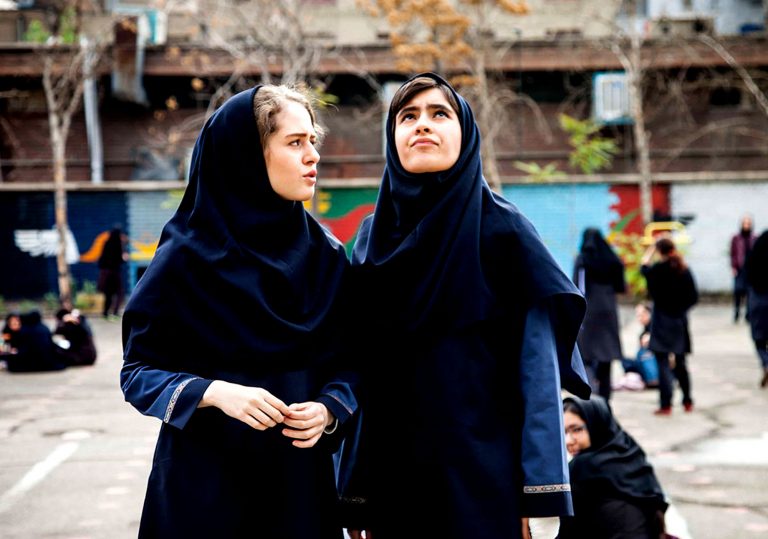 There’s been a lot of buzz around Sadaf Foroughi’s debut feature since its Toronto premiere in 2017.

Foroughi delivers a strong debut with a perfectly pitched performance from Mahour Jabbari.

A meticulously composed film which sometimes distracts from the understated performances.

Ava has been directed by Sadaf Foroughi as a musical variation on multiple themes. We open with the minuet third movement from Boccherini’s ‘String Quintet in E Major’, best known for its use in classic Ealing comedy The Ladykillers. Just as Professor Marcus and co use the piece to throw Mrs Wilberforce off the scent from their criminal plot, Ava (Mahour Jabbari) and her best friend, Melody (Shayesteh Sajadi), aren’t just meeting up to play music. For Ava, hanging out at Melody’s house is a rare escape from the repression she faces from her mother (Bahar Noohian) at home and her teachers at school.

Singing along to the air of Boccherini, Ava’s classical interests mask her desire to break taboos, such as by wearing make-up. This rebellious behaviour is shot in extreme close-up, creating an uncomfortable proximity which mirrors the nervousness with which Ava does something a Western audience views as mundane. Cinematographer Sina Kermanizadeh is similarly adept at filming interactions from a distance, bringing a coldness to typically warm domestic moments. The shots are exquisitely composed, set out with an impressionistic quality which gives the film a stunning painterly aesthetic.

The sterility of Ava’s home is enhanced by the film’s visual style: the nauseating pale green walls are sparingly decorated with mirrors much like Jeanne Dielman’s apartment in Chantal Akerman’s 1975 film. Like Jeanne, we watch the routines of Ava’s mother and witness a sense of regret simmer under her hard exterior, despite having a career as a psychiatrist – she claims to have pursued what was best for her family rather than her adolescent passions. The camera enhances the oppression of women, filming only their reflections in soft focus or fragments of their bodies blocked by. With the ticking of Ava’s metronome, we sense for her that simmer will eventually rise to a boil.

While Ava’s mother pushes her daughter toward another career, perhaps due to music’s frivolous associations, her father (Vahid Aghapoor) is more sympathetic to her passion for the violin. Unfortunately, the suggestive framing through windows with characters out of shot or behind the camera prevents the audience from being able to appreciate the subtlety of the performances. Sometimes the scale of Ava feels unstable, teetering between sweeping statements on the role of women in Iran and the microcosmic Tehran-based family drama of the script.

It’s possible to do both, and it’s in the more subdued moments of Ava that we feel the full force of Foroughi’s frustration. It’s beautifully communicated by the cast, especially Jabbari whose titular character seems to be discussed by others more than she speaks for herself. We rely on Jabbari’s expression to know her feelings, stoic until she demonstrably isn’t, and those rare cracks are the ruptures which give the film its impetus. They give hope that a woman’s movement could rise up at any minute, whilst bitterly acknowledging the majority’s acquiescence to patriarchy.

There’s been a lot of buzz around Sadaf Foroughi’s debut feature since its Toronto premiere in 2017.

Foroughi delivers a strong debut with a perfectly pitched performance from Mahour Jabbari.

A meticulously composed film which sometimes distracts from the understated performances.