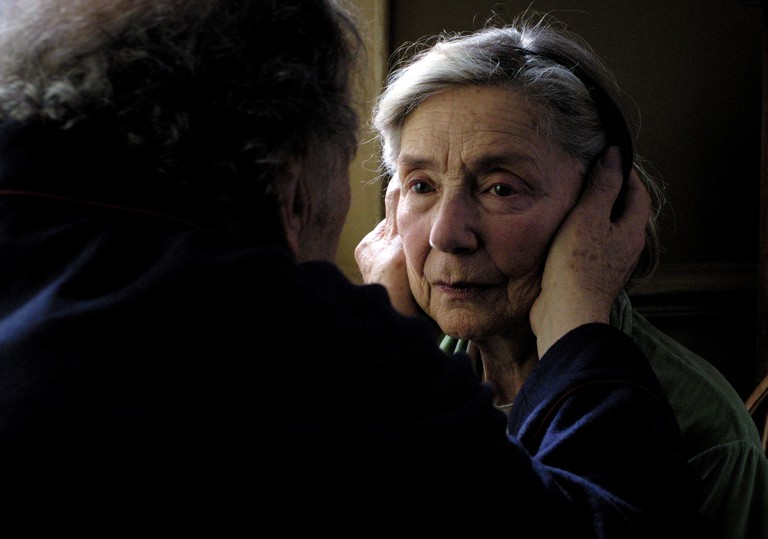 A formidable and towering piece of craft, though hardly an enjoyable trip to the pictures.

Is Amour a ‘perfect’ film? Yes, but maybe not in a good way.

It’s become a life’s calling for all devoted Hanekerians (as they like to be known) to act as freelance image consultants to the imperious and severe Austrian director they so admire. It’s a tough job. Michael Haneke appears to take an almost maniacal pleasure in tanning humanity’s collective hide, whether for our hapless shirking of class responsibility (Hidden), our innately fascistic behavioural impulses (The White Ribbon), our inability to temper base emotional urges (The Piano Teacher), or simply because, as a species, we’re doomed to oblivion (The Castle, Funny Games).

But, as the Hanekerian will surely claim, he is not a glutton for punishment. His films are, in fact, full of compassion, poetry and even – if you really squint – joy. His Palme d’Or-winning latest, Amour, is Haneke’s answer to the weepie. Even though its subject matter is almost parodically grim, it’s a film that offers a rare glimpse of the director’s humane side. Though he might say otherwise, Amour comes across as an austere articulation of bracingly personal fears.

Anne suffers a mild stroke, and the film simply, directly, punishingly charts the process of her physical and mental decomposition. Georges, with his light limp and battle-hardened determination, takes it upon himself to make Anne’s protracted journey into the abyss a comfortable one. He takes small respite from a sly cigarette or a blast of Schubert.

Almost in cahoots with the immobility of its central characters, Darius Konji’s camera glides, ghost-like, through the autumnal confines of the apartment, occasionally halting to monitor the tragic and humiliating routines that come before death. By the end of the film, we have a rare intimacy with the geography of this place, this prison.

Haneke does nothing to force undue sentiment; the overriding mood is one of escalating melancholy and bitter acceptance rather than unchecked terror. Georges and Anne are reticent about expressing their mutual love, but this stately film is about the ways in which we demonstrate undying affection without even knowing it.

When she threatens to go on hunger strike, Georges slaps Anne because he can’t bare to see her stop fighting. There’s also a lovely moment where Georges helps the semi-paralysed Anne from a wheelchair into an armchair, and for a wonderful second they share a brief slow dance.

Though the majority of the film takes place in the grey-brown rooms of their apartment, the director allows our couple to vicariously experience the outside world through photographs, paintings, music, dreams and occasional visitations from friends and family.

Indeed, one of the film’s most strangely moving moments sees Haneke – in a flourish cannily borrowed from his own Code Unknown – cutting away from a close-up shot of Georges struggling to feed Anne to a silent montage of canvases depicting countryside vistas that hang in their flat. The suggestion here is that these static impressions of nature are the only way in which the couple will experience the great outdoors again.

Trintignant and Riva are so extraordinary and precise, it’s hard to fathom just how Haneke managed to coax these performances from them. Beyond the events presented within the film, Amour makes a bold statement about the traumatising demands of screen acting and the perversity of being paid to enact your own demise. It also works as a detailed document of the ways in which industry provides a consoling machinery for death.

But for all its apparent tenderness, Amour still feels like a stern lesson in death. Every shot, every line of dialogue, every nuance, every cut is so stiflingly precise and loaded with meaning that the film begins to resemble the yellowing pages of a medical textbook. Even an amusing digression in which a pigeon enters the flat through a window equates to little more than a giant, flapping, open metaphor.

If it seems harsh to be criticising Haneke’s unsparing rigour and his empirical search for formal and intellectual perfection when so many directors are open to compromise, then let’s look at it this way: Amour is a film that deals exclusively in solutions, answers and truths. It tells. It shows. It reveals. It is about what it is about. The question we must ask is whether a film that lacks any sense of openness can ever be truly great. Perhaps not.

A formidable and towering piece of craft, though hardly an enjoyable trip to the pictures.

Is Amour a ‘perfect’ film? Yes, but maybe not in a good way.