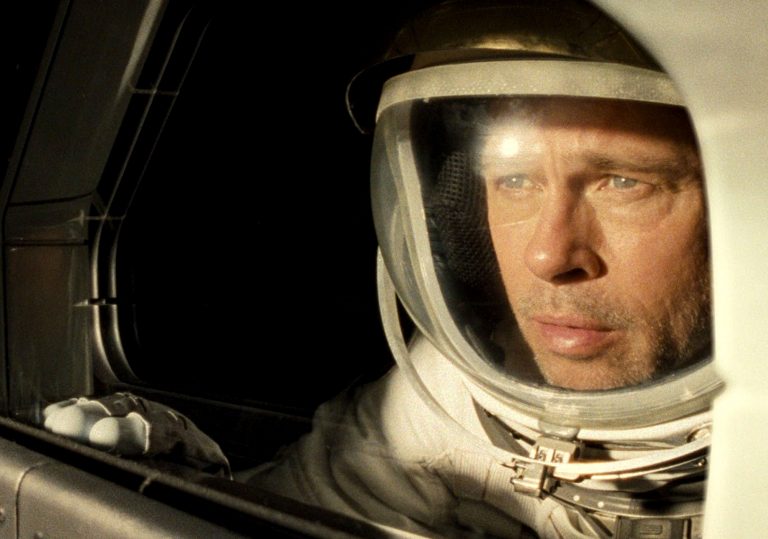 A new James Gray film. How will he test us this time?

Alongside Claire Denis’ High Life, this has been a bountiful time for screen science fiction.

Isn’t it a wonderful feeling when a director whose work you have been typically apathetic towards in the past produces something that comes dangerously close to a masterpiece? The speculative idea of A James Gray Movie has always managed to whip up a sense of anticipation and intrigue. Yet James Gray in reality has always, for me, landed on a bust. We Own the Night. The Immigrant. The Lost City of Z. Thanks, but no thanks.

And that’s not to discount the vaulting ambition and earnestly classical approach he takes to his work, it’s more that the individual fragments never seem to coalesce into a satisfying, rounded whole. Until now, that is. Ad Astra, his rich, contemplative science fiction opus, begins on a recreation of the final shot of Stanley Kubrick’s 2001: A Space Odyssey – a floating face in a bubble and planet earth, each protruding from opposite sides of the frame – and heads up, up and away from from there.

Come on down for all the eccentric detail he and co-writer Ethan Gross vacuum pack into this intergalactic escapade set in a near future where deep space endeavour is on the cusp of unearthing something profound about our status in the galaxy. Stay for the realisation that this is an extraordinary and elaborate film about the emotional devastation of losing a parent.

With a hint of comic irony, Brad Pitt is introduced as the lanter-jawed hero Roy McBride who, even when in the midst of extreme peril, is able to retain an almost supernatural cool. We see him fall from a space antenna and down to earth, and the nabobs in mission control are fascinated by the fact that his heart-rate never once went above 80.

He is immune to fear, or maybe jaded by the prospect of pain, and so the ideal candidate to venture to a Mars comms base and coax his missing-believed-dead father, Clifford (Tommy Lee Jones), back from the rings of Neptune and a long-term research mission named The Lima Project. Energy surges are emanating from Clifford’s ship and radiating across the solar system. They need to be stopped to prevent the wholesale devastation of the known world.

If you wanted to reach for a crass logline, then Apocalypse Now in space is not far off. Pitt even seems to channel the listless, seen-everything (though secretly petrified and confused) comportment of Charlie Sheen’s Captain Benjamin Willard. Yet Gray manages to signal his reverence towards the canonical masters of cinema, and the classics of the sci-fi genre, while also making a film that’s very much its own thing, one which is perhaps his most fluent expression of the idea that blind, some might say crazed ambition is in itself an end which justifies a means. Answers can supply peace of mind, but sometimes, just daring to ask the question is a feat in itself.

The episodic narrative sees Roy march across the galaxy with a view to reconnecting with his estranged father. The visual ravishments are plentiful, and Gray draws new aesthetic life from the extremely well-worn iconography of space suits, satellites and star-dappled vistas of the sublime infinite. Max Richter’s score works wonders as a emotive mood enhancer, and even when there’s an action or a suspense sequence (and there are many very good ones), it always loops you back to the essential poignancy of this eventual father-son showdown.

In terms of the acting, it’s pretty much a one-man show, as Pitt is in virtually every shot of the film. The man is on a serious roll at the moment, here repurposing the mellow charm of his Cliff Booth in Once Upon a Time in Hollywood to mask wells of intense sadness just waiting to burst forth. The question of whether Pitt will be pitted against Pitt at the 2020 Oscars is not at all a stupid one. Elsewhere, Ruth Negga shines in a small but important supporting part as a partial victim of Clifford’s humanity-threatening flame out. Her eyes alone should be insured for billions.

We won’t say what it is, but Gray lands the big finale with visual and emotional elegance. Ad Astra is a lament to the things we won’t see or the ideas we won’t understand in our relatively meagre lifetimes. These astronauts pray to God before their vessels blast off, and it’s both strange an exciting to see a film where humanity retains its spiritual belief in a future dominated by science, discovery and cold rationality.

The film suggests that maybe we don’t need to risk life and limb in the desolate outland of space to achieve personal contentment – to feel as if we’ve contributed something valuable to the future of mankind. Because what does it even mean to such complex beings as humans, who can barely sustain a simple relationship, or understand the impulses of a friend, a lover of a parent. Sometimes, a monolith appears in front of us, and it is just a monolith – nothing more. Accept it, move on and achieve your ultimate bliss.

A new James Gray film. How will he test us this time?

Alongside Claire Denis’ High Life, this has been a bountiful time for screen science fiction.