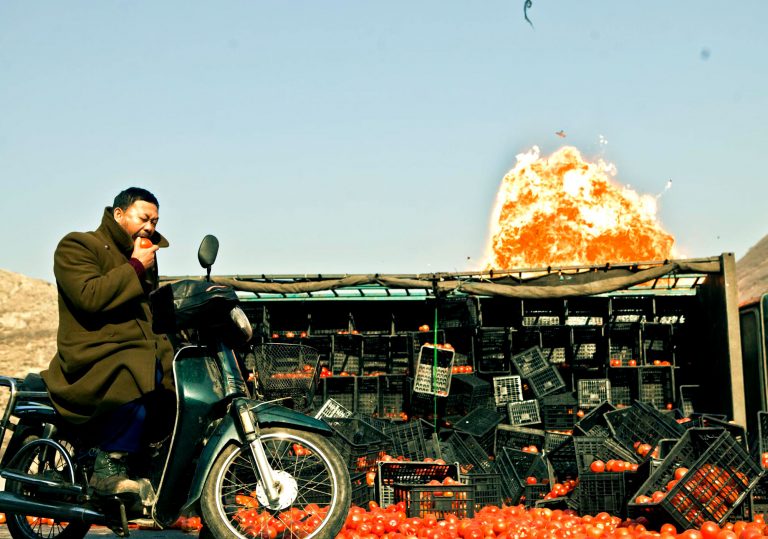 Jia’s world still moves in slow motion. That is until the knives — and guns — come out.

For more than a decade, Jia Zhangke has been China’s most fearless filmmaker. Draconian film censors only emboldened the director by slapping him with a lifetime ban following his second film, 1997’s Xiao Wu. Then, a series of international successes forced Beijing’s cultural guardians to reconsider. Despite being made within the system, A Touch of Sin is arguably his most outspoken movie yet.

It’s an unflinching and violent ride. In the opening minutes alone, there’s a fatal truck crash, an attempted robbery that leaves three dead and an exploding fireball on the horizon. The rapidly rising body count in this full-on opening segment signal that Jia has not so much shifted up a few gears, but is riding on a completely new stretch of road. His signature long, slow pans, a portrait painter’s eye for detail and that sense of loneliness in a crowd are still present. But the solitude is now punctuated with violence. One of his protagonists could’ve walked out of a Tarantino film as he empties his shotgun in front of a village temple. But this is no homage. Like Tarantino, Zhangke is influenced by wuxia martial arts films. Even the title is a nod to King Hu’s 1971 Taiwanese wuxia classic A Touch of Zen.

But instead of looking back to ancient times, Jia finds lower-class journeymen heroes trying to fight oppressors and find retribution for misdeeds in modern China. Inspired by true stories that only came to light through Weibo (China’s answer to Twitter), Jia scratches through the surface of economic miracle headlines to focus on a fissured, fragile and volatile China. A Touch of Sin moves through four provinces to look at the stories surrounding four deaths: there’s a disgruntled miner whose faith in the system is fraying due to endemic corruption; a silent migrant worker who keeps his living is secret from his family; a young itinerant factory worker whose luck runs out; and a spa receptionist who must fend off an indecent proposal.

“I’ll smother you in money,” an official says with menace to receptionist Xiao Yu — defining one of the movie’s central questions: what is the definition of the term ‘cost’ in a society where everything is up for sale? Jia picks up themes from his previous films concerning the human struggle against changes set in motion by much larger, unseen, possibly incomprehensible forces. His heroes here are people in various stages of adapting to the new realities of a once communist country that has hit fast forward to ultra-individualism. These are the people who are exploited, cast aside and left behind as businessmen and politcians have become fixated with the race to get rich.

Beyond the social critique, Jia is also making his case for how movies about China ought to be made. In the past, he’s criticised other filmmakers, such Zhang Yimou, director of Raise The Red Lantern and the Beijing Olympics Opening ceremony, for shying away from contemporary problems in their films and fleeing into the past.

His contemporaries seem to be listening. This year, the China Film Directors’ Guild, the country’s equivalent to the Oscars, refused to hand out its two top awards — best picture and best director — in what was widely seen as a protest against censors’ refusal to screen A Touch of Sin.

“You’ve picked the wrong time to fight,” an official tells coal miner Dahai in the film. But like his heroes in this film, Jia remains defiant and gives it to the censors with both barrels.

Jia’s world still moves in slow motion. That is until the knives — and guns — come out.