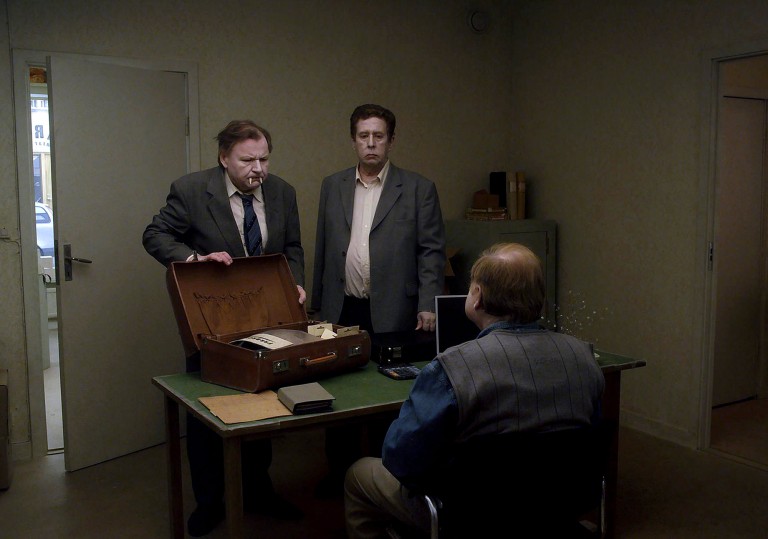 For Roy Andersson die-hards, this might as well be The Return of the Jedi.

Caps off one of the greatest trilogies ever made.

The third and final instalment of Roy Andersson’s “trilogy about being a human being”, A Pigeon Sat on a Branch Reflecting on Existence is very much of a piece with Songs From the Second Floor from 2000 and its followup, 2007’s You, The Living. Each of the three films comprises a series a darkly comic vignettes captured by an unmoving camera with a focus so deep it borders on the infinite. Andersson’s spartan but immaculate sound stages are populated by non-professional actors, who are caked in pale makeup that makes them appear zombified and suspended between states of being.

But if Andersson’s latest has an air of the familiar, the maturation of the film’s ideas, the indelibility of its images, and the fluency with it speaks to its maker’s previous work cements Pigeon as a vital instalment to the trilogy. In fact, that relative sameness becomes Andersson’s ultimate theme, the film’s unspeakably perfect last shot a direct rebuttal to the idea that things should – or even could – be any other way.

While Pigeon is the most inviting of Andersson’s films, it eventually reveals itself as a trap. Named after a bird perched above the action in Pieter Bruegel the Elder’s ‘Hunters in the Snow’, the film begins with a morbid triptych of scenes that Andersson helpfully introduces as “three meetings with death”. These introductory skits function as a primer for Andersson’s style, acclimatising viewers to a film world unlike any other.

Part recap and part seduction, the prologue’s true purpose is a bit more nefarious than it seems: Andersson is planting the seeds of complicity, imploring his audience to smile, chuckle, and then laugh at the mortal misfortunes of others. It’s an impulse that he’ll stoke for the next 100 minutes before unleashing an antepenultimate scene of unfathomable horror that confronts the crowd with their own secondhand inhumanity.

In the film’s incredible centrepiece, which can be identified as one of narrative cinema’s most impressive long-takes by the time it’s half over, two characters have an encounter with Sweden’s King Charles XII, an early 18th century sovereign remembered for his bloodthirsty aggression towards other countries. In this one shot, Andersson refracts the intrinsic power of the time-image through the lens of time itself so that the inertia of history is felt in minutes and centuries alike.

The set-up achieves a transcendent state of suspended animation, as though every person in the shot has been taxidermied alive. Andersson’s jaw-dropping reach into the past is made possible by the technology of the present, taking advantage of his digital camera and its capacity to shoot for stretches of uninterrupted time far longer than film permits.

Whereas Songs from the Second Floor and You, The Living both ended on notes of despair, A Pigeon Sat on a Branch Reflecting on Existence resolves with a cathartic sigh of acceptance, and maybe even hope. Its last act is one of simple generosity, and in a single moment Andersson’s trilogy of self-contained suffering blossoms into a unified still-life.

For Roy Andersson die-hards, this might as well be The Return of the Jedi.

Caps off one of the greatest trilogies ever made.