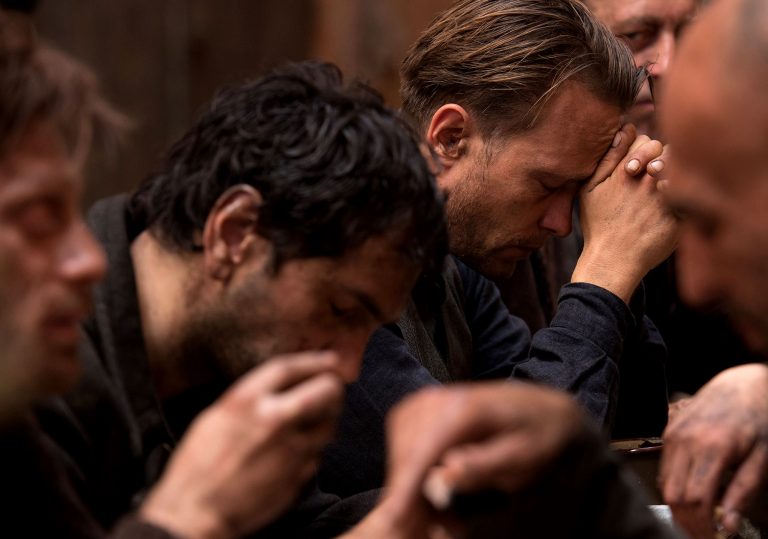 Always primed to visit the church of St Terrence.

Love and morality in a time of national evil.

An exquisitely emotional and thorough account of an individual resisting state fascism.

“Live by the foma [harmless untruths] that make you brave and kind and healthy and happy.” This is the epigraph that author Kurt Vonnegut uses to launch his 1963 masterpiece ‘Cat’s Cradle’, hooked to the fictional religion of Bokonism. Terrence Malick is a Christian rather than a Bokonist, yet the faith he explores in A Hidden Life bears more relation to foma than the more dogmatic dictates of organised religion. This is a film about a man’s unwavering faith enabling him to rebel against the forces of evil, so it’s important to try to understand exactly what type of faith is being upheld.

A searcher’s energy expressed through earnest philosophical voiceovers has been a trope of his work ever since his first film, Badlands. It’s an energy cranked up during what is known among fans and detractors alike as ‘Malick Phase 2’, heralded by The Tree of Life in 2011. This was the point at which Malick stopped using scripts, allowing his actors to roam free in baffled awe under the enormity of creation. A Hidden Life represents a return to a more narratively-contained mode of storytelling, a dash of Phase 1 holding the spirit of Phase 2 in place, as he takes one idea and pursues it through to its conclusion. The idea is: What if your country demanded that you swear an oath of allegiance to Hitler and you refused?

Our story begins in 1939 in the village of St Radegund, a peaceful haven in the municipality of Upper Austria. Fani (Valerie Pachner) and Franz (August Diehl) Jägerstätter live on a farm in a mountain vale working the land with their three young daughters, his grandmother, and her sister. “How simple life was then. It seemed no trouble could reach our valley… We lived above the clouds,” says Fani. Images show a simple idyll – each day full of good, honest toil, apple picking with rosy-cheeked children, hoeing fields of yellow corn, chopping wood, sweeping churches and, in winter, shovelling snow. There are muddy pigs and a cute donkey.

James Newton Howard’s score is overwhelmingly stirring, as string and piano notes travel high up to heaven then back down to earth, revelling in orchestral music that presents bliss as a state of blithe humility. Jörg Widmer’s camera is omniscient, gliding from above to below, following lovers on a motorbike, charging into the wholesome ruckus of family games, pushing into faces with a lover’s wild impulsiveness as Fani gives a summation of how life has been until this cataclysmic year in human history.

Hitler is introduced in clips of black-and-white newsreel footage: carried on a float through a rally; giving speeches; goofing with a child. There are no grand expository conversations where characters set out what is happening to Jewish people across Europe. Malick believes that the audience doesn’t need a crash course explaining what the Nazis did, and the weight of the film is achieved through what is not shown – the shadowland that Franz refuses to enter.

His is initially a notional refusal. Franz and Fani discuss options (“maybe you could hide in the mountains?”) as the darkness of national barbarism insidiously creeps across Radegund. Nazis show up at the farm collecting for the war effort. Gossip circulates about Franz’s lack of loyalty to the Fatherland. Former friends refuse to talk to the family. Inevitably there comes a moment when he is called up for national service, at which point the couple is wrenched apart. Franz is thrown in jail for non-cooperation, while Fani is forced to shoulder a more intense share of the work and bear the burden of local hostility.

“You will surely be shot. Your sacrifice would benefit no one,” says a local priest to Franz while he is still a free man. Later an exasperated party dignitary says, “Do you think anyone will ever hear of you? What purpose does it serve?” There is something like a myth or a fable in the film’s leit motif of passionate dissuaders launching logical or emotional assaults on Franz. He receives these with the same beatific calm with which he responds to cherished sympathisers. Not once in the course of the film does Franz waver in his belief that it is right to resist fighting for Hitler. His conviction is in stark contrast to a recent fictional man of God: Reverend Toller, played by Ethan Hawke in Paul Schrader’s First Reformed. He is frenzied with doubt, wondering how the Almighty could allow an impending climate catastrophe to occur. 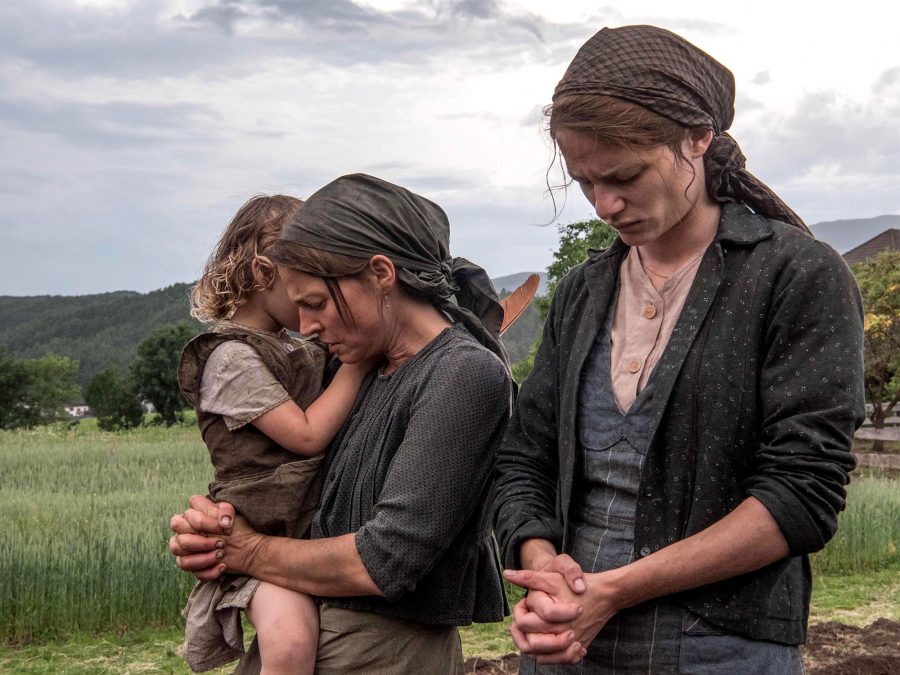 Franz does not take World War Two or the Holocaust as a reason to question God’s existence, as the relationship he has with Him takes the form of an abstract conversation on the nature of individual morality. God’s perch as an overseer of all humanity is not broached, as Malick sets out his philosophical stall for a different type of anguished questioning. Is there value in an impractical, purely symbolic act of anti-fascism? Can sacrificing your family and leaving them to fend for themselves be justified on the grounds of non- participation in evil? It’s hard to get a read on Malick’s view of Franz: does he see his creation as a hero, a saint, or simply an everyman emboldened by a molten moral core?

While Malick’s head is in the sky, his feet are on the ground in the form of Franz and Fani’s relationship, which is so beautiful, so pure, so equal that it would seem like a fantasy were it not rooted, at first, in working the soil and, later, in a written correspondence that evokes the extent to which they are soul mates. It is a source of marvel how naturally simpatico they are, in mind, body, soul, word, deed and moral outlook. Both emit dignity, neither is easily riled. They fit together like a lock and key, lying in each other’s arms in the grass, or talking in hushed tones while she chops herbs with a large knife. Theirs is a companionship forged in cooperating over a daily workload across many years.

Malick’s previous films Knight of Cups and Song to Song rendered the opulent backdrops of rich, mobile, metropolitan people. The images in A Hidden Life are agricultural, with one dominant location which means the world to these characters. Much of Pachner and Diehl’s performances are centred around working the land, an endeavour that becomes heavier once Franz is absent. He is positioned as the protagonist by dint of the story proceeding from his obligation, however she has the greater amount of screen time, and the audience is aligned to her position as the one left behind.

The stakes of A Hidden Life are the potential loss of their relationship and the bereavement in their family. All the work that Malick does, deploying his DoP to explore every nook and cranny of their life above the clouds, rendering all details with quiet euphoria, and aims to steadily build up an emotional resonance that signals how things will end. 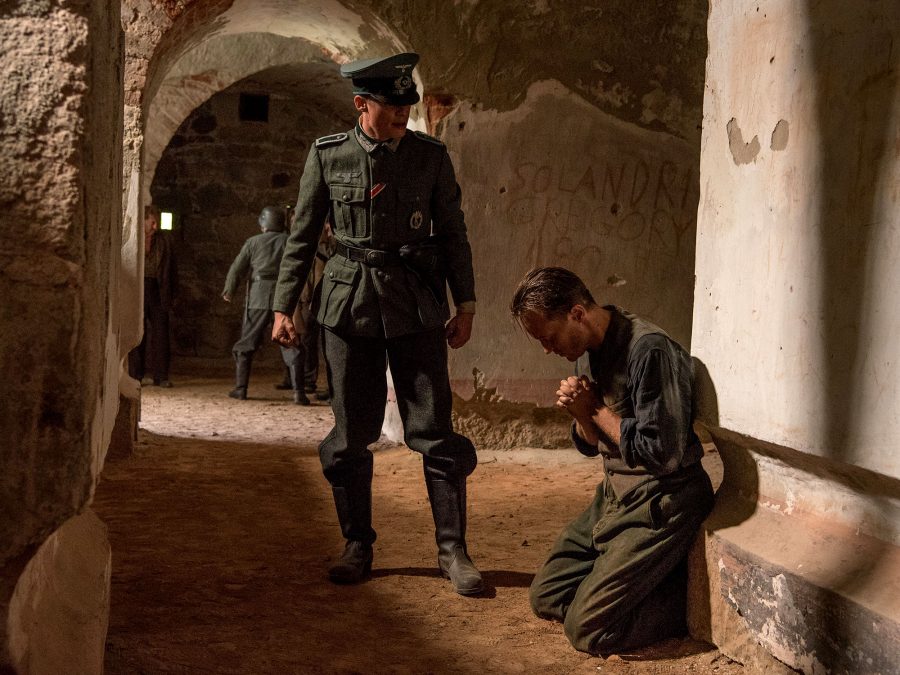 The only jarring element in the whole picture is a lack of overt logic regarding use of language. Almost all dialogue is in English, yet background characters start yelling in German and some of the Jägerstätters’ later letters are narrated in German voiceover. This language switch seems a whimsical way of introducing tonal colour, but it feels slapdash and out of place in a film that is otherwise as delicately crafted as a glassblower’s sculpture.

So, do Franz’s beliefs make him brave and kind and healthy and happy? Yes to ‘brave’, not exactly with regard to ‘health’ and ‘happiness’, although you could argue that these adjectives apply to a spirit that never warped to pressure. Malick, as always, uses religious language in service of describing something
about the internal landscape that gives people the conviction to stand up and be counted, a quality that is couched in religious language here, but needn’t be for us all. “I will meet you in the mountains,” writes Fani in her final letter to Franz. These mountains are internal – a place that exists in their shared understanding of life and each other.

Was it ‘kind’ of Franz to leave her? This is an answer that requires the most pretzelled reasoning, still it is a reasoning borne out by the tone of the film which locates the sublime even in human separation. A Hidden Life is, underneath it all, a love story. The Jägerstätters are a private microcosm imprinted by history. The Nazi regime is almost incidental, as these people could be anywhere opposing any evil regime. The substance of the film is buoyed by unselfish, enlightened love, shaped by a couple’s faith in each other’s morality. What could be kinder than to allow someone’s spirit to thrive whatever the sacrifice, and in turn to feel their wholeness intact within you in a place symbolised by mountains that still surround your place above the clouds?

Always primed to visit the church of St Terrence.

Love and morality in a time of national evil.

An exquisitely emotional and thorough account of an individual resisting state fascism.