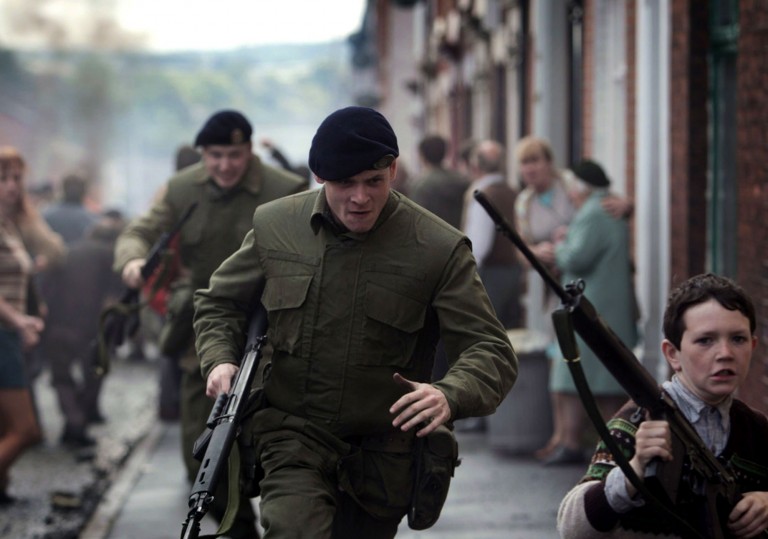 After Starred Up, anything with Jack O’Connell in has got to be worth a look.

Stumbles at the last, but this is strong work from Demange.

Having already been put through the wringer this year in director David Mackenzie’s sensational, gruelling prison drama Starred Up, Jack O’Connell finds himself navigating a new hell in first-time director Yann Demange’s authentically gritty take on The Troubles. If there’s a more exciting British male lead under 30 out there right now, we haven’t seen him.

O’Connell plays private Gary Hook, who enlists in the hope of seeing action abroad but instead is deployed to Northern Ireland at the height of the territorial conflict. His regiment might be situated just a stone’s throw from where they’ve been assigned to keep the peace, but when Hook and his fellow new recruits are dropped from the back of an Army truck onto the rubbled streets of Belfast, the sanctuary of the barracks feels a world away.

As his unit retreats following a bodged house raid, Hook is separated and subsequently left behind. Caught behind enemy lines, his survival instinct kicks in and the film shifts focus from the cinematically familiar backdrop of civil unrest and paramilitary hostility to track Hook’s movements over the course of a long, harrowing night. Having narrowly evaded his would-be captors, Hook discards his uniform in favour of less conspicuous civvies.

This is the first instance of Demange and screenwriter Gregory Burke’s recurring use of anti-war metaphor. In literally stripping Hook of his military guise, he becomes just another scared boy playing soldier in the name of a cause he doesn’t fully understand. As the human face of the ‘long war’, O’Connell is perfectly cast: he is by turns tough and vulnerable, equally convincing as an aggressor and victim. This is not a history lesson but more a story of one young man’s education, and O’Connell, in yet another demanding leading role, absolutely nails it.

Despite its incendiary subject matter, this is not an overtly political film but rather a study of the personal cost of war, of the tragedy of innocence snatched away by the hands of dangerous, manipulative men. A nail-bitingly tense set piece centred on the concealment of a nail bomb in the backroom of a dingy pub is the most visceral example of this, but there are many others.

Having been pulled further into this nightmare scenario, and now bearing the unmistakable signs of physical and emotional combat-induced trauma, Hook becomes embroiled in an undercover plot that sees both his squadron and the circling Provo youth — played with indoctrinated menace by Martin McCann, Killian Scott and Barry Keoghan — intensifying their search for him.

With nowhere left to run, Hook is forced into a desperate standoff situation on a grim tower block estate, where the film’s messy internal politics return to the fore in unsatisfyingly grisly fashion. The tacked-on orphan backstory that bookends ’71 further dulls the impact of the ending, but this remains an impressive debut feature buoyed by a captivating central turn.

After Starred Up, anything with Jack O’Connell in has got to be worth a look.

Stumbles at the last, but this is strong work from Demange.