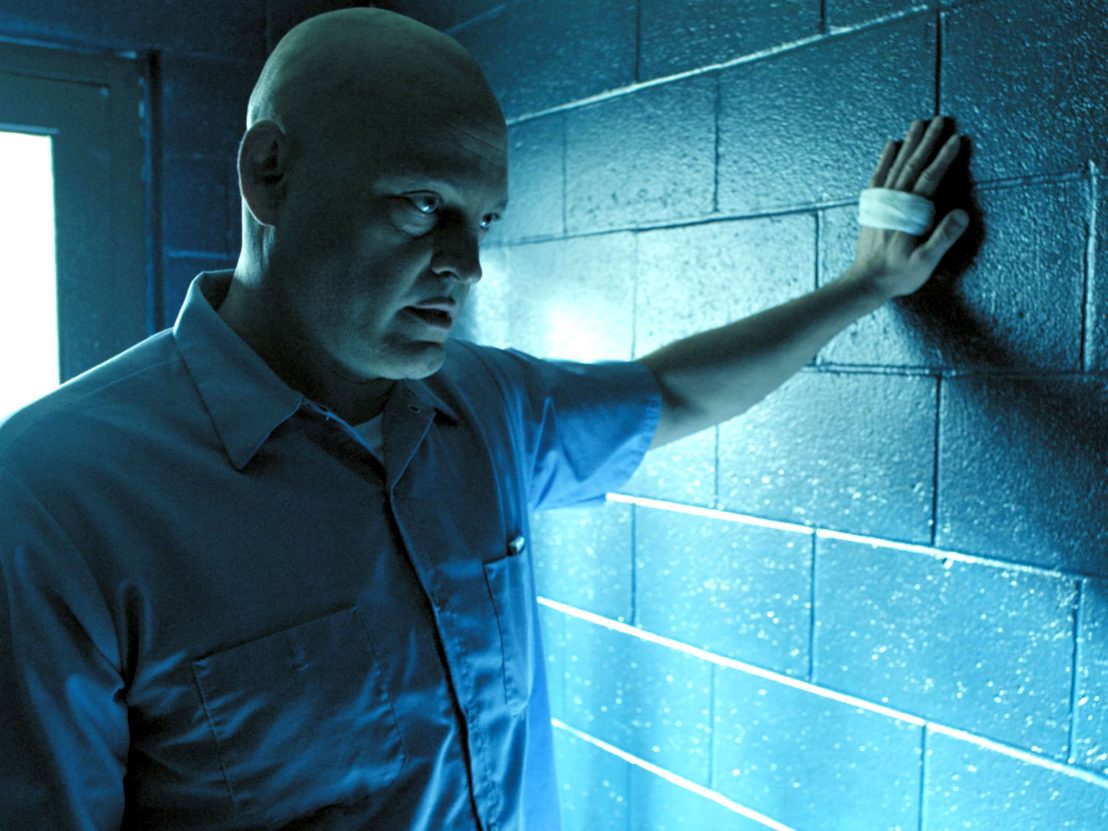 Having wowed audiences with his out-of-nowhere hit Bone Tomahawk in 2015, writer/director S Craig Zahler roars back into town with this even bloodier follow-up, set largely inside the confines of the world’s grimmest prison – a privately run facility called Red Leaf.

Vince Vaughn, known more as a comedic schmuck than a brute with a conscience, excels in the lead role as Bradley Thomas, a lumbering hulk of a man who loses his job at the car workshop, forcing him into a delivery spot, dropping off shipments of drugs. Things haven’t been going well at home – his wife Lauren (Jennifer Carpenter) admits to having an affair after their miscarriage – and the pressure’s on to make things right.

Which Bradley (not Brad, as he keeps pointing out) succeeds in doing remarkably well – albeit at a price. Eighteen months later, the couple are living in a sprawling suburban pile, with Lauren again pregnant, and Bradley getting paid a ton for each drop-off he carries out. That’s also when a fresh supplier rolls into town, and Bradley finds himself partnered up with a pair of Mexican heavies who aren’t so good at following orders.

A messy police shoot-out ensues and after doing the right thing, Bradley is arrested and sent down for seven years. To make matters worse, the job gone wrong carries with it a heavy price tag, which Bradley must pay back – or else, risk the life of his wife and his unborn child.

Over the course of two-and-a-quarter hours, Bradley proceeds to bash to smithereens whomever he needs to in order to resolve this dilemma. Heads are literally pummelled to a pulp with increasing, stomach-turning regularity, when the man of otherwise controlled emotions suddenly erupts. These violent outbursts play out slowly, with some dry humour (delivered mostly from the prison guards), although not on the level of Zahler’s previous film. Among the welcome supporting turns to savour: Don Johnson (as a cigar-chomping prison chief) and Udo Kier (as a sadistic henchman).

This is an intense, at times visually saturated viewing experience that certainly isn’t for the faint-hearted. It pulses along nicely with a funk-and-soul soundtrack in tow – this is a film made for guys who love their muscle cars – even if some judicious editing could have helped with the drawn-out pacing (it feels long, no matter how engaging it is). Vaughn seems to inhabit this unusually brutal role with surprising ease and glee, perhaps in a conscious effort to diversify away from his regular studio pap (2016’s Hacksaw Ridge notwithstanding). Carpenter isn’t called upon to do much in her supporting role (women are blatantly relegated to near irrelevance in the action here), while Johnson and Kier make the most of their screen time, the latter with his trademark zeal in abundance.

Some may find the imminent threat facing Bradley’s wife and unborn child a little too much to take – it’s too unpleasant to spell out here – but without it, the stakes would not be high enough. Zahler’s penchant for this type of material – he cites Sam Peckinpah, Don Siegel and Michael Winner among his key influences – serves him well, provided one can handle some seriously toe-curling sequences that veer close to sadism. By its very nature, grindhouse carries with it its own set of caveats, and this brutal and very well-executed film is no exception. Avoid watching around mealtimes, then, and keep your loved ones close. This brawl is one hell of a blast.