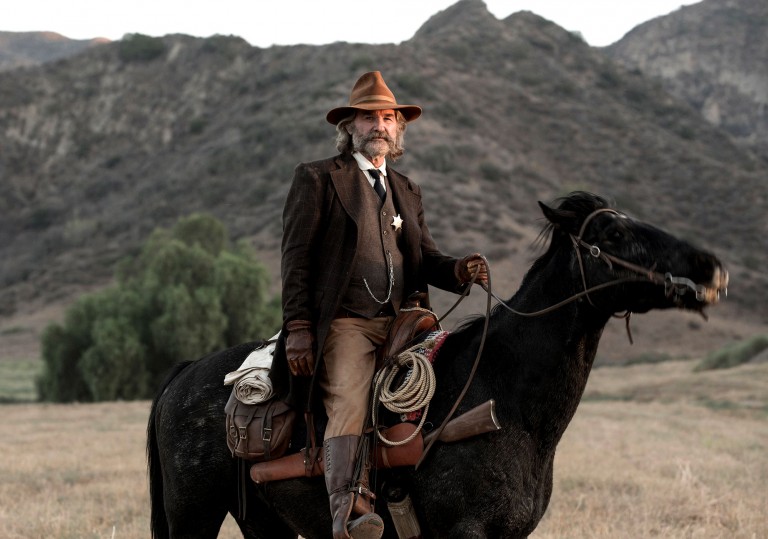 The Descent with cowboys.

A precariously balanced, genre-literate oddity with something to say.

The hook of Bone Tomahawk – Kurt Russell fighting cannibals in a frontier town – may suggest a comical romp, but novelist and first-time director S Craig Zahler’s ambitions are far loftier than low stakes revivalist exploitation. It’s an unpredictable, offbeat picture, which places the mythical notion of the West at the point of convergence between horror and the western.

Zahler shows himself to be an adroit navigator of both genres, and Bone Tomahawk is at its best when it exploits the common ground between the two. The story concerns local sheriff Franklin Hunt (Russell) and his three companions – lame tough guy Arthur (Patrick Wilson), dandy killer John (Matthew Fox) and dim-witted Chicory (Richard Jenkins) – on a journey to rescue a group of captives from the lair of a cannibalistic tribe.

While the picture does riff on Russell’s genre credentials, it largely eschews the self-conscious brand of B-movie nostalgia one would expect from such a premise, opting instead for a patient, almost somber unravelling. The pace can be leisurely to the point of ponderousness, but the frequent digressions yield darkly comic grace notes, which have a deliciously macabre, Coensian edge. Covering everything from the mechanics of cutting veins in the neck to the intricacies of reading in the bath, each story is rife with deliberate anachronisms, delivered with deadpan relish.

However, while these constant conversational detours may give the film some flavour, they put it in a precarious commercial position; too languorous for the genre crowd perhaps, and too lurid for the art house. As soon as the abduction is discovered, the locals, ignorant of their own complicity in the chain of events, scramble to blame the Native Americans, thus setting off the film’s narrative of imperialist reckoning.

Each member of the search party embodies a distinct strand of American exceptionalism, be it the blind moral purpose of Hunt or the insidiously impassive braggadocio of Jack, decked in colonial white as he boasts of killing 116 Indians. Each man is driven by a sense of manifest destiny, eager to impose his own values onto a hostile, barren land (“We’ll make sure all of this has value”). They fail to see that they’re alone in their crusade. As Arthur says, semi-opaquely, when speaking in his sleep, “Big James would shed a tear if any calves went astray.”

Both horror and the western deal, to varying degrees, with the fear of the other – typically a symbolic representation of the anxiety of the age. Zahler’s stroke of brilliance is in appropriating an antagonist typically associated with horror into the western milieu, and using it to critique the imperialist impulses of the latter. The cannibal brings chaos to the settlers’ fragile, decrepit order, and they are too ensconced in their own world to stem it.

It is no coincidence that the film’s key line is spoken by one of the only women featured – “This is why frontier life is so difficult. Not because of the Indians… but because of the idiots.” If the studio era showed us how the West was won, then Bone Tomahawk posits a bold argument for why it was lost – to put it very bluntly, rampant male stupidity.

The Descent with cowboys.

A precariously balanced, genre-literate oddity with something to say.