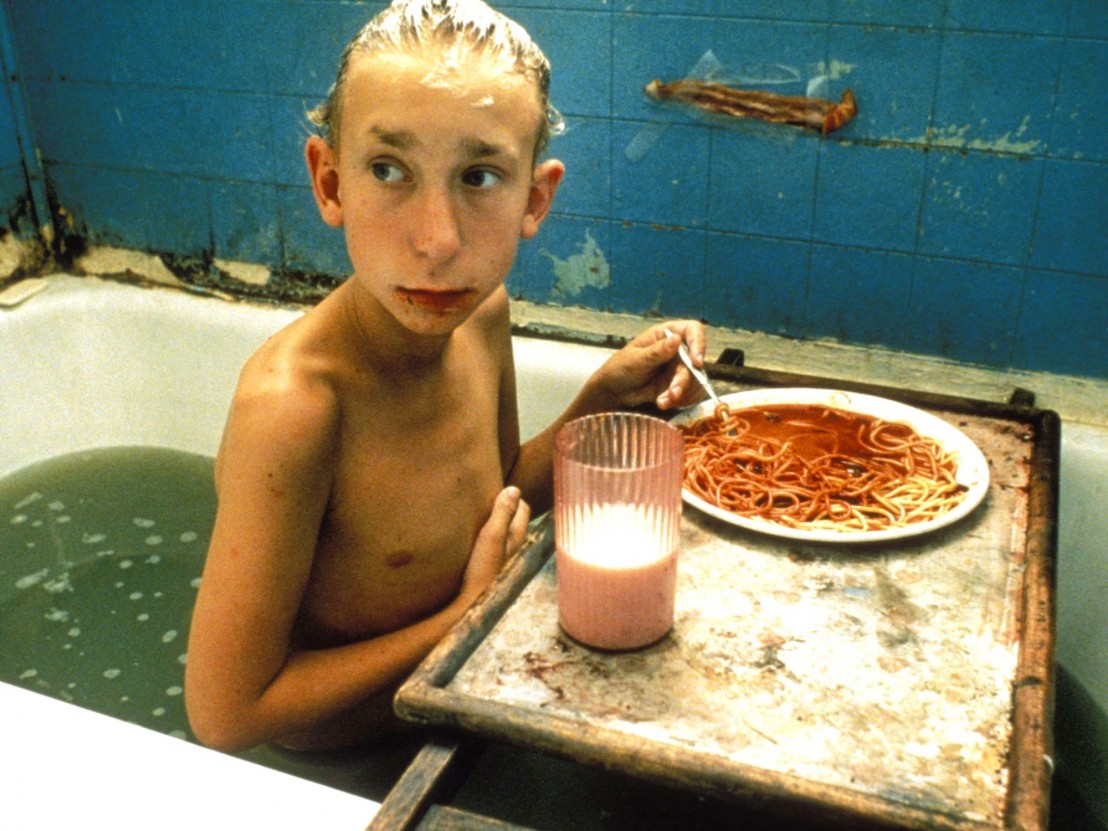 With the sheer volume of films parachuted into our cinemas and released through various, new-fangled viewing portals, it’s some kind of achievement that a movie – any movie – could retain even half-a-microbe of cultural relevance nearly 20 years down the line from its inception. If you can, please keep your gag reflexes in check for just a moment: yes, a term like “cultural relevance” is vague and bland, ushered in by self-appointed commentators or (pardon my French) marketeers to subjectively describe a property they believe is still talked about or beloved in some rarified or influential circles.

But for the here and now, it’s used to characterise a piece of art which has managed to preserve a connection to the modern cultural landscape, but without necessarily trying to. The subject of this piece is Harmony Korine’s 1997 debut feature, Gummo, which – if you love it, loathe it or are indifferent towards it – is a film which appears cheerily immune to the ravages of time. And that is part of its essential beauty.

Gummo is a painstakingly (creatively!) repellant heroin chic cine-scrap book which demands its brave viewers question if what they are watching contains any artistic or intellectual nourishment whatsoever. Or whether it’s all just a bunch of grotesque E numbers set to black metal ditties. This strategy in itself is what great art should do – dismantle its true identity, or at least coquettishly obscure it from outsiders. Like poking dog shit into the vol-au-vents just as they’re being carried into the society ball, the film retains the feel of a grand prank, like its raison d’être is not merely to steam-up the monocles of the conservative critical cognoscenti, but to force them to claw their own eyes out in abject opprobrium. And then it laughs when they do so.

Perhaps one sign of the film’s endurance is that it has become a critical shorthand in its own right. The term “Gummo-esque” (or variants thereof) is often employed to describe movies with a fascination in locating aesthetic beauty in crumbling, small town landscapes, or those that capture balls-out parochialism with a spare naturalism. The unyielding and uncomfortable manner in which Gummo grapples with human diversity has also allowed it to linger long in the memory. Where some may see it as a young, affluent oik putting together a Barnum-esque freakshow for the delectation of braying lollygaggers in expensive baseball caps, others could ally Korine’s cosmetically unvarnished mode with work by photographers like Nan Goldin or Diane Arbus. Maybe it’s magical social realism?

And just to confuse matters further, Korine leans on the redoubtable (and classically-inclined) talent of the late cinematographer Jean-Yves Escoffier who captures all the rasping degradation on show by mixing ghostly, gliding pans with fuggy, close-quarters hand-held techniques. The director pays lip service to these prestige qualities while using them to capture innocent transgression, which in turn makes deciphering the film’s meanings (whatever they may be) even tougher. The question of whether Korine is mocking his subjects, or whether he’s presenting them in the same flawed way as we would do any human character, constantly hangs over the film. And it’s not a question with a clear cut answer.

There’s a charming irony to be found glancing back at the press reviews of the film that surfaced around its original release. Just as the upstart writer-director – a gawky style mag poster boy following the succès de scandale that was Kids – used his camera to chip away and inspect the human mildew forming on the underside of America’s mid west poverty-belt, critics appeared to be plundering the outer reaches of their own lexicons in order to articulate their fiery contempt for this ugly-beautiful provocation. Janet Maslin of the New York Times brassily announced in the opening line of her hard takedown that Gummo was the worst film of the year.

She later decried the film’s lack of poetic potency by citing a line of dialogue from the film’s introduction to the tornado-ravaged berg of Xenia, Ohio: “I saw a girl flyin’ through the sky and I looked up her skirt.” As dismissive of politesse though it may be, there’s a certain humanity to the observation, that even in tragic circumstances our inqusitive impulses remain. And to thumb its nose further at those looking to be placated by drab convention, it does contain staples of Hollywood films such as cheap eroticism, sexual danger, murder, youthful monkeyshines, desperation caused by poverty, musical montages, heartfelt monologues and even an incredible dance sequence. It just recalibrates them to fit with its own tumbledown milieu.

Though modern movie lovers might hold the film in high esteem (for this writer, it’s still the best thing Korine has put his name to), it’s not just a random drop in the ocean which revolutionised cinema in one cat-whipping blast. Though not as raw and emotionally complex as films by John Cassavetes, or as spiritually profound and rounded as those by Robert Bresson, you can trace DNA back to both of these directors. Perhaps Gummo offers a more cosmetically inclined 90s continuation of the punkish nihilism expressed in Bresson’s 1977 film The Devil, Probably? Or maybe it harks back to Cassavetes’ shot-on-the-shoulder blast of twilight frottage in, Shadows, from 1959?

Or perhaps its roots plunge deeper still, back to the tradition of American docufiction lodestones such as Lionel Rogosin’s On the Bowery (from 1956) or Morris Engel’s Little Fugitive (from 1953), both films which supplant a broad dramatic framework over an attempt to approximate the shrill unruliness of real life? Or maybe we have to look right back to the silent era, where directors still unsure of the capabilities of the medium, simply pointed their rudimentary cameras at the people of the fields, the streets, the factories, and allowed the lens examine their natural behaviour?

Despite its abiding underground popularity, the film has remained in distribution limbo for quite some time. An American DVD exists, as do various European versions. A VHS can be bought in the UK if you know the right people. In 2009, the film was tossed back into the limelight through the surprising outlet of primetime television talent show, ‘The X Factor’, where one its contestants opted to sing a rendition of Roy Orbison’s ‘Cryin’’ and cite its provenance as the film Gummo. The question, ‘what is Gummo?’, was suddenly on the lips of a nation, with TV comedian Harry Hill even turning the moment into a regular call-back gag on his tea-time magazine show, TV Burp.

There’s a chance to pay further homage to Gummo when the London Short Film Festival hold a weekend “Gummosium”, screening the film along with some of Korine’s early shorts, and hosting a panel discussion about the film’s endurance and legacy. It’s all happening on the 16th and 17th January at London’s ICA Cinema, which gives Korinophiles ample time to dust down their pink bunny ears, tune up their squeeze boxes, sniff some aerosol fumes, pop some Ritalin, tape some bacon to the wall, wrestle a chair and devise an accompanying tap routine for Madonna’s ‘Like a Prayer’.

The 2016 London Short Film Festival’s Harmony Korine Weekender (with MUBI.com) is on 16 and 17 January. For venue and ticketing info visit shortfilms.org.uk