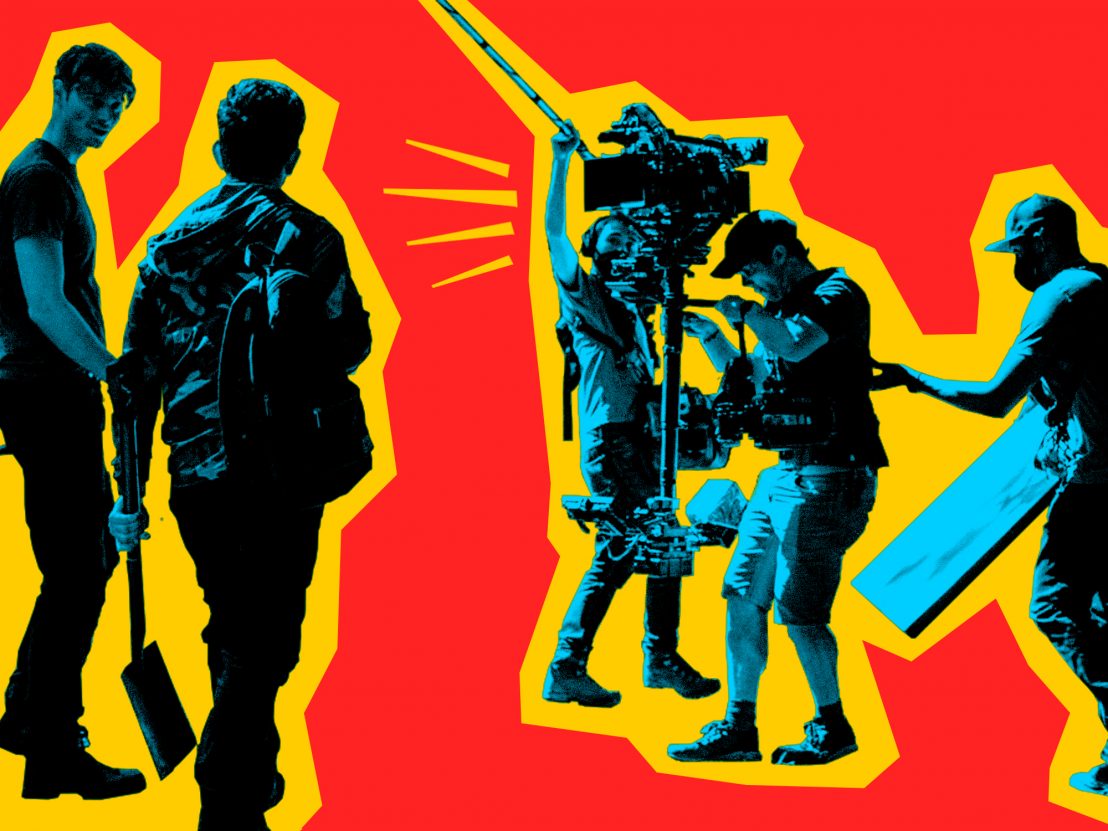 Michael Shon and Joe Johnsey are actors and roommates. During the first UK lockdown in March 2020, they worked at home on the short film Shallow. Paul Ashton came on board as director, and production got underway in August.

The cast and crew lugged a day’s worth of equipment and supplies out to Shepperton Studios and, while observing social distancing guidelines, filmed an atmospheric two-man thriller. There’s a photo of all of them, standing two metres apart, almost defiantly.

None of the cast or crew has received a penny from the government’s Culture Recovery Fund (CRF). A lack of support for freelance workers like them across the country could lead to 400,000 job losses, compounding the situation for an industry “on the brink of devastation”.

Here at LWLies, we’re not prepared to sit back and watch as the independent film industry, and the livelihoods of people like the Shallow crew, are left to ruin. We want to start asking tough questions – and uncover the answers.

The CRF is a £1.57 billion handout that Chancellor Rishi Sunak has described as a “one-off investment into UK culture”. It is being distributed by the Arts Council England, the British Film Institute, Historic England and National Lottery Heritage Fund. It was officially cited to “save these sectors, maintaining jobs and keeping businesses afloat”.

Since the CRF was announced in July 2020, the hashtag #HereForCulture has been ever-present on social media feeds; a mandatory condition for businesses to post in the event of them being granted funding. But questions remain as to whether the government has done enough.

At least one third of applicants were rejected as others were handed millions. Revelations that dormant companies were successful while venues like The Windmill in Brixton were rejected based on their company status have fuelled speculation that CRF is, at least in part, decided by an algorithm. Is this fair? And is it the solution to protecting working-class creatives, and avoiding cultural elitism? 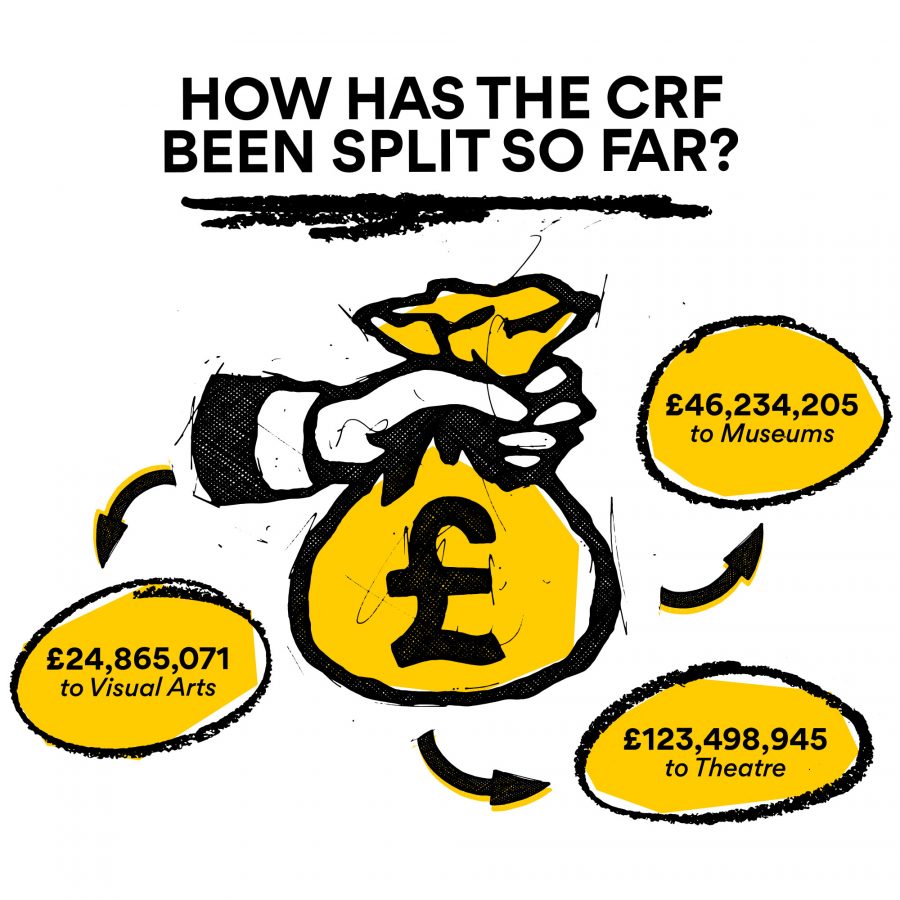 Despite the sector’s £115.9 billion contribution to the economy in 2019, the CRF is the only funding that over two million people working in the creative industries in the UK have seen since the pandemic began.

In response to the budget announcement on 3 March, the Shadow Minister for Culture and Sport, Alison McGovern, said the Chancellor “hasn’t created employment support schemes that are remotely suitable to the creative industries,” and that the post-Brexit agreement “really screws creative professionals and their ability to get work.”

We have heard accusations of nepotism, London-centrism, classism and elitism from individuals across the industry. The CRF has been criticised by everyone from blockbuster directors to independent cinema owners and front of house staff.

“None of that fund was given to individuals or freelancers in the industry,” says Michael Shon. “None of us were eligible for the self-employed support, as we don’t make more than 50 per cent of our income from film or acting.” The little money they had to make Shallow was raised on Kickstarter, but none of the cast or crew were paid. Michael and Joe even put their own savings into it.

“Nothing surprises me about how this government does things,” veteran filmmaker Ken Loach told us. “When they give Test and Trace to their City pals, how can you be surprised?” Having dedicated his life to directing films centred on the plight of ordinary working folk, Loach believes not enough is being done.

“Cinemas tend to be excluded from the Arts. This government sees the Arts as putting on a black tie and going to Covent Garden; they think in terms of multiplexes. But independent cinemas, the ones run on goodwill and volunteers, a lot of those will get forgotten because they don’t register on the BFI’s list.” (The BFI is responsible for distributing the £44m allocated to independent cinemas, which equates to 2.8 per cent of the total fund.)

“I’ve been to quite a few [independent cinemas],” Loach adds, “and they are working really hard. They really love cinema. And they will struggle.” Loach worries that smaller cinemas, especially those outside of London which may not meet the criteria for funding, will fall through the cracks in what he describes as “an emergency” for the Arts. “We need to make sure it isn’t just a London-centric exercise,” he says. “Every town should have its venue.” 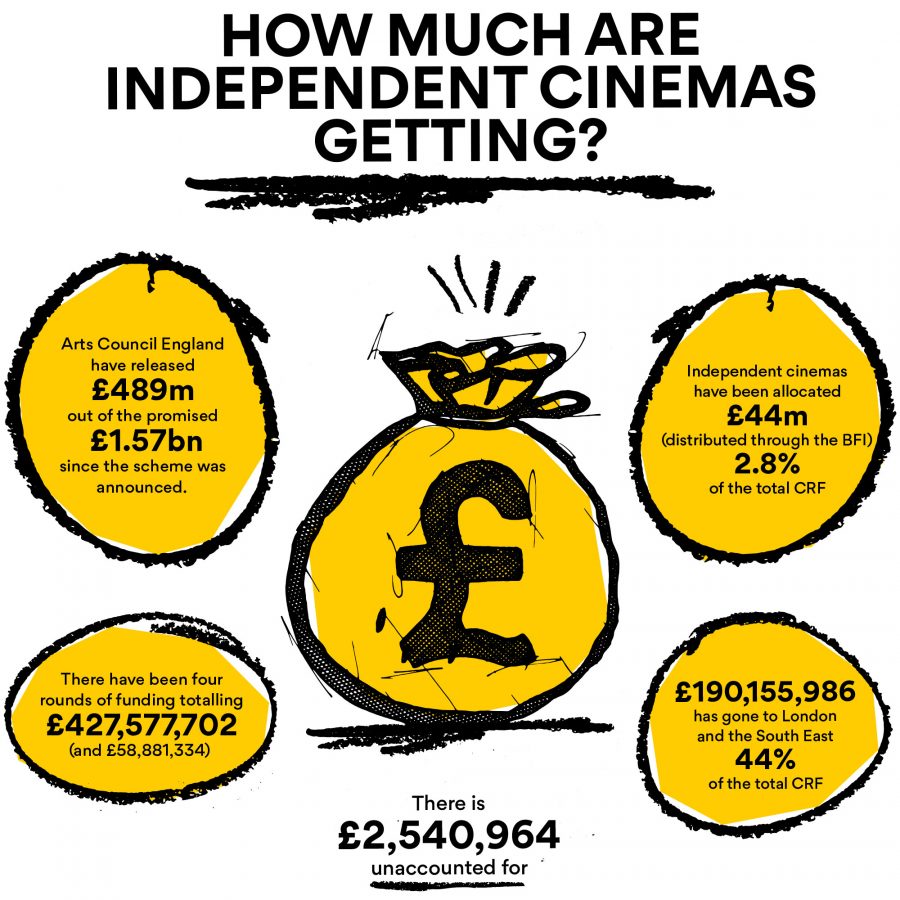 According to the latest figures from the Office for National Statistics, the Arts is the fifth most severely hit services sector in the UK, shrinking by 60 per cent in December 2020. In Step 3 of the Prime Minister’s roadmap for reopening the country, cinemas can begin operating again from 17 May, but capacity limits are still unclear at the time of writing.

Compounding the lack of support for the Arts is the state of the hospitality sector. There is a double whammy in terms of loss of income for thousands of professionals across the country who have taken on service industry jobs to supplement their work in the Arts.

In one of the worst instances, 400 plus employees were made redundant from the National Theatre, including Front of House and Bar staff, the majority of whom were actors, writers, directors and creatives. This has been an issue for decades – the pandemic has simply magnified the problem.

So what will become of films like Shallow? Without cinemas, independent and smaller-budget films struggle to find audiences. If it’s not on Netflix or another streaming platform, a film relies on real-world patrons buying tickets to festival and cinema screenings. Any exposure or commercial success generated by that model is essential in enabling filmmakers to continue creating.

Over the course of this investigative series, we hope to find some answers and bring you a vision of a future that could allow filmmakers, actors, crews and audiences to not only sustain independent cinema in the UK, but remake it anew, for the better.

If you have any information about the CRF or would like to share your experience, please get in touch with either @BataDaisy or @AWLies