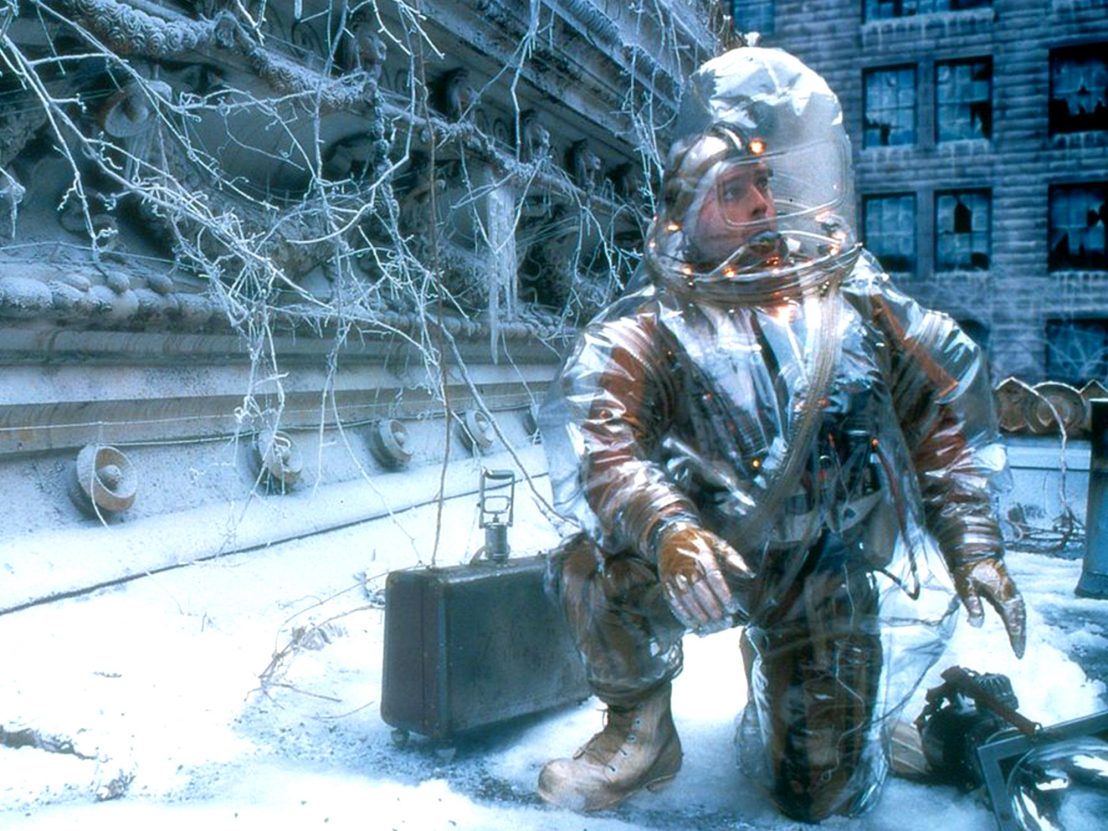 Sometimes a retread of an older film can be more than a remake. Terry Gilliam’s Twelve Monkeys is one such film. It is perhaps best described as a response, if only because it is already building on an echo and feels part of wider creative continuity that travels back several decades. Said response is to Chris Marker’s 1962 short ‘photo-roman’ La Jetée, and the echo is Alfred Hitchcock’s Vertigo. The film is part of that spiral of memories, cinematic or otherwise, complicated further by the fact that all of the works in question are also dealing with memory as a theme. Memory’s finality and its proximity to death are at the heart of all three films.

Expanding on La Jetée’s narrative, Twelve Monkeys follows a prisoner named James Cole (Bruce Willis) from a future that has been all but wiped out by the release of a deadly disease in 1996. He agrees to partake in time travel experiments conducted by the militarised science unit in charge of trying to find a cure for the disease. He is first sent back to 1990 where he ends up in an insane asylum, meeting fellow patient and animal rights activist Jeffery (Brad Pitt) and doctor of psychology Kathryn (Madeleine Stowe).

Intertwining himself in both of their lives, Cole travels back and forth between the future and several different periods, getting closer and closer to the truth behind the outbreak of the virus and its link with a mysterious sect known as the “Army of the Twelve Monkeys.” Little does he know, however, how enmeshed he really is within the events of history.

Gilliam is respectful to both Marker and Hitchcock. When Marker’s credit appears in the opening sequence, an owl – one of the director’s two animal ciphers – soon follows, looking on wisely over an abandoned, snowy Philadelphia. As Gilliam has suggested, Marker’s film is one of the heights of the form: “The editing is the most extraordinary I’ve seen […] I mean you’re dealing with poetry at this point.” Vertigo is also very much a part of Twelve Monkeys, partly as respect to Marker’s project and partly as intertwined in the narrative. This creates a complicated, if not slightly flawed, web of dizzying cultural reference with the addition of Gilliam’s usual eye for the grotesque and the paranoid.

It is, however, difficult to see Twelve Monkeys as separate from the cultural echo that it is part of. In fact, it deliberately plays upon it, self-referencing these influences and foreshadows until it is evident that its more pulp elements are there to balance these numerous reference points. Considering Marker’s original film is a good starting place for untangling this referential spiral. Though dealing with a similar narrative of time travel and paradoxes that fold in upon themselves, La Jetée is equally about Marker’s personal search for something else; namely the spark that inspired his love of Vertigo. Marker’s film is replete with references to Hitchcock’s film, from the photograph of the two characters temporally mapping themselves on the rings of a tree trunk, to the circular sway of his female lead’s hair.

Marker has regularly acknowledged his preoccupation with Hitchcock’s film, by his own admission linking La Jetée to Vertigo later in Sans Soleil where he suggests in his voiceover that, “only one film has been capable of portraying impossible memory, insane memory: Alfred Hitchcock’s Vertigo.” This aspect of insanity is important for Gilliam’s spin on the memory spiral. Time and its paradoxes are literally maddening, transporting the central protagonist to an insane asylum.

For Gilliam, this is the hook for the blurred line between madness and reality, destabilised by the time travel. Of course, like any paradox, the instability is a sham as everything is foretold and already fixed. He thinks he is changing the memory of the past but he was always a part of it. Vertigo already played on this to some extent – the past was already set and the future that Scotty (James Stewart) tried to remould from it after his second encounter with Judy (Kim Novak) was always destined to collapse. The tragedy was that he had to live the inevitable death of his obsessive love twice over.

In Twelve Monkeys, Gilliam actually brings Vertigo itself into the mix, with Cole and Kathryn watching the film while on the run. “I think I’ve seen this movie before,” he says to her as it becomes apparent that he’s living in a world that is a literal echo of Hitchcock’s Boileau-Narcejac-adapted narrative. At this point, they are finally getting closer to the airport of Cole’s dreaming from childhood. Kathryn has donned a blonde wig as a disguise, giving Cole his own echo of Judy Barton’s final transformation back into Madeleine Elster. Kathryn even uses the name Judy as an alias once at the airport.

Madeleine is appropriately named in the original ‘D’entre les Morts’ novel, for it hints further down the spiral towards another memorial device: ‘In Search of Lost Time’ by Marcel Proust. Marcel Proust’s recollections in his long novel of remembering are instigated largely by the taste of a Madeleine cake conjuring images of his past, leading the writer to exclaim “And suddenly the memory revealed itself.” The emotions of his past were inescapable and unavoidably wrapped up in the smallest of details. Scotty’s “Madeleine Moment” came from seeing Judy in the street, partly but unknowingly recognising her. Little does he know that, in Proustian terms, it is the same Madeleine.

In La Jetée and Twelve Monkeys, the Madeleine is the woman ghosted by the traveller, the woman he has seen since childhood crying out as she witnesses his older self killed. This is a memory of the future. Kathryn may be Cole’s Madeleine, but she only represents one thing, the same thing that it ultimately represented for Marker, Scotty and for Proust himself: the inevitable loss that visits all of our lives, regularly and unsparingly.

Twelve Monkeys is released on Blu-ray on 15 October by Arrow Video.