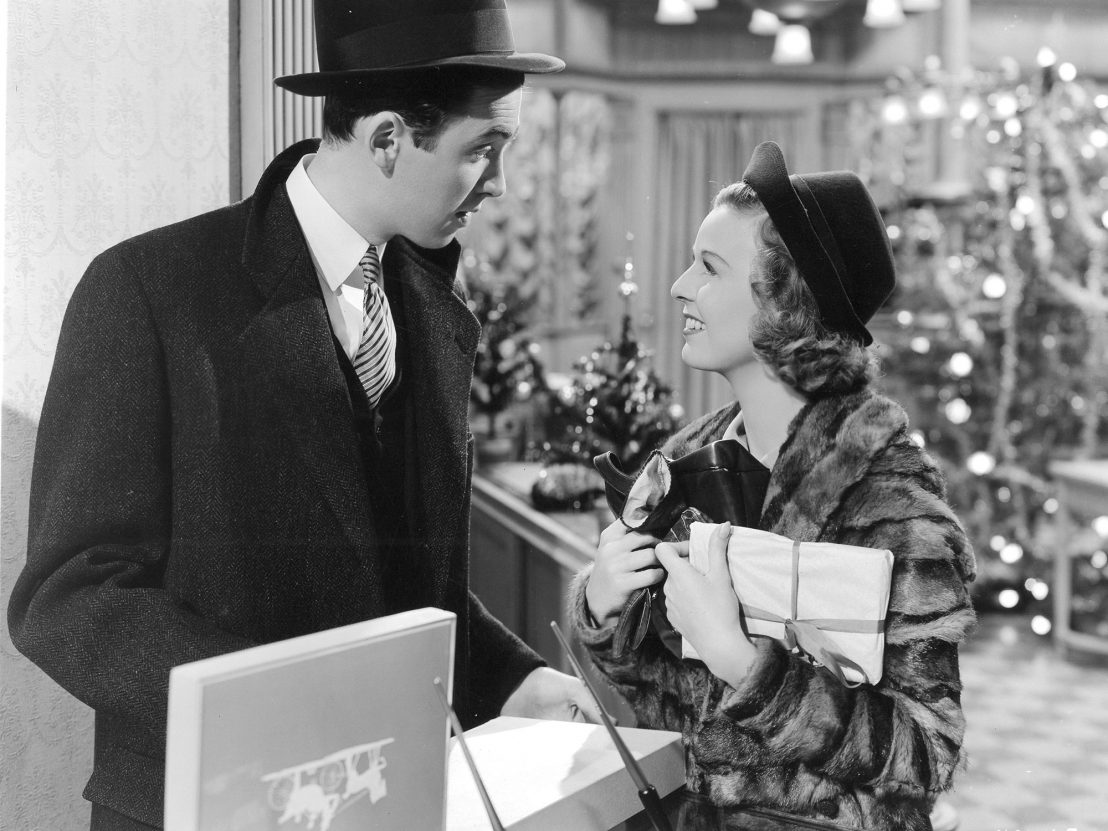 No image captures what we mean when we talk about ‘Christmas spirit’ better than that of George Bailey at the end of It’s a Wonderful Life, holding his wife in one arm and his child in the other, stunned into blissful silence after the kindness of his neighbours has saved him from ruin. It is an image of familial harmony and belief in the goodwill of people, and one that might have descended into cloying sentimentality were it not for the natural genius of James Stewart and his boyish charisma and pathos. Alfred Hitchcock brought out the actor’s darker side in Rear Window and Vertigo, and Anthony Mann a macho element in their westerns together, but it’s this kind of loveable little guy with an aw-shucks common decency that sees Stewart at his best and most suitable for festive family viewing.

It is certainly the most famous, but It’s A Wonderful Life was not the only Christmas-themed classic Stewart starred in. In Ernst Lubitsch’s The Shop Around the Corner, released seven years earlier, he plays Alfred Kralik, a clerk working at a small leather-goods shop in Budapest. Like George Bailey, Alfred is driven by a youthful ambition to aspire for more out of life, and is excited when he starts exchanging messages with an unknown girl who he believes to be a kindred spirit that shares his aspirations towards the intellectual and poetic view of the world. Little does he know, however, that the recipient of his messages is Klara Novak (Margaret Sullivan), his colleague at the shop with whom he is perpetually bickering with.

The set-up is is fertile ground for both romance and comedy, and there are indeed plenty of great one-liners and graceful moments of humour (“If you don’t like Miss Novak, I can tell you right now you won’t like that girl,” informs one supporting character to Alfred upon discovering his correspondent’s identity – “Why?” “Because it is Miss Novak”). The core of the film isn’t so much their romance, however, but the small community of workers at the shop. Released in 1940 at the tail end of the Great Depression, Lubitsch depicts a struggling landscape, and the shop is toiling for business. Yet, notwithstanding the occasional argument, everyone gets along well and cares about each other, from well-meaning boss Mr Matuschek (Frank Morgan) to cheeky young errand boy Pepi (William Tracy) and kindly old confidante Pirovich (Felix Bressart).

The film’s title suggests a setting that could be within touching distance of any neighbourhood, and the shop has a cosy feel comparable to the small town of Bedford Falls in It’s a Wonderful Life. Almost all the film is confined to either inside the shop or on the quaint street just outside of it, and Lubitsch reinforces the sense of intimacy be shooting many scenes as just two characters framed in mid-shots simply talking together. And in these many interactions he applies the famous ‘Lubitsch touch’, a style of comedy not as uproariously funny as the contemporary fast-talking screwballs, but subtly graceful and exuding warmth and compassion.

Another similarity with It’s a Wonderful Life is the way the characters first must endure hardship before being redeemed at Christmas. Alfred is disappointed to find his idealised girl is in fact Clara (it’s testament to James Stewart’s talent that he can say some pretty mean things to Clara yet remain so likeable – perhaps because when she returns the insults, at one point dismissing him as a ‘little insignificant clerk’, he has the look of a puppy told off by its owner). Then the office harmony is disrupted when Mr Matuschek mysteriously turns cold towards Alfred and sacks him. It’s later revealed that Matuschek has mistakenly believed Alfred to be having an affair with wife, and, upon realising that it was instead another of his employees, the sycophantic, two-faced Vadas (Joseph Schildkraut), he unsuccessfully attempts suicide.

But with christmas eve comes redemption. Matuschek returns to work to find business booming, in what is a celebration of the less idealised yet perhaps just as pertinent Christmas tradition of buying and selling stuff. And Alfred and Clara end up together, learning to abandon the idealised versions of each other they’d both constructed, and instead embracing the flawed real thing.

But again, the most affecting moments in the Christmas Eve-set final act involve the shop as a community. Alfred passingly refers to them as ‘our little family’ earlier in the film, and that notion is reinforced when, in an emotional monologue, and while crammed into the frame with all his employees, Matuschek comes to terms with his wife’s adultery and declares that “this is my home” before handing them all generous bonuses. As each of them files out to go home to their families he contemplates what looks set to be a lonely night, only to discover that the new errand boy also has no-one to celebrate Christmas with, and the two arrange to have a feast together in what is an unlikely and disarmingly touching climax. The final scene of It’s a Wonderful Life may end with a literal family, but Christmas is just as much about artificial one born out of the workplace in The Shop Around the Corner.